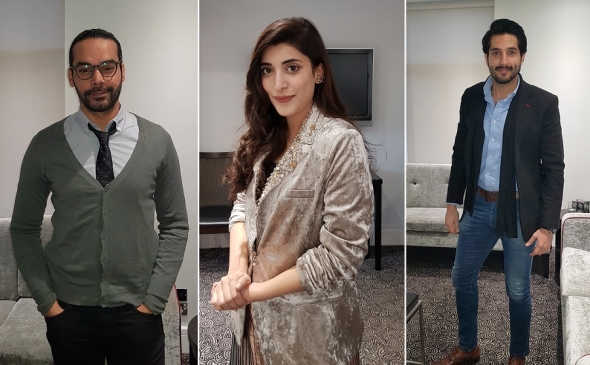 YOU FEEL Urwa Hocane is not afraid of saying it like it is, and wants actors like herself to make a difference.

While she can’t go into the specifics of the character she plays in ‘Rangreza’ alongside her male co-stars, Bilal Ashraf and Gohar Rasheed, she told www.asianculturevulture.com what sort of roles appeal to her.

She expressed an admiration for the latest Wonder Woman – Gal Gadot and is drawn to the work of the early female pioneers of modern Pakistani cinema.

In London, she told acv: “There are so many actresses I look up to, Babra Sharif and Zeba Bhaktiar – we’ve had legendary women running the industry.”

‘Rangreza‘ also contains the music of World Music and Sufi sensation Abida Parveen, an icon in her own right and the music has been playing out to decent numbers of Youtube.

Hocane and her co-stars Ashraf and Rasheed were in upbeat mood when www.asianculturevulture met them (all separately) in central London last week, as they ended a short UK tour, which took in Newcastle, Manchester and Birmingham.

The three feel Pakistani cinema is changing and improving and their own film ‘Rangreza’ is indicative of a new mood.

Hocane’s character is the one who gets caught between two suitors – each played by Rasheed and Ashraf.

Rasheed’s character ‘Waseem Wallay’ is a bit off the wall and is a percussionist in a traditional Qawwal music outfit; his love rival, played by Ashraf, is a rock star.

Wallay has been promised the hand of Hocane’s character (by her father as some traditions encourage), only for Ashraf to step forward and complicate affairs.

“Gohar’s character comes from a different socio-economic background to mine and there are differences and this film puts everything out there on the table in front of you,” explained Ashraf.

“Love and music is a universal language and that part of the content is very strong and shows Pakistan in a very different way, in a way that hasn’t been seen before – you have had beautiful scenery with rivers and mountains, but this is not like that. It’s about the internal beauty.”

Initially, Ashraf turned down the part.

“I thought the script was fantastic, but I didn’t think I wouldn’t be able to pull off the character. I have no musical background – usually those cast for musical films have one.”

He was persuaded to change his mind by several figures behind the whole project and feels he has come a long way.

“I had to learn the guitar and at times I felt like snapping it over my head, but I learnt the basics and I started to enjoy it,” he said of his experience.

Rasheed took to the part of Wallay right from the time he first heard it being narrated to him, by director Amir Mohiuddin and writer Akhtar Qayyum.

“This was a part I really wanted to play because it was so challenging and difficult to do.

“Waseem is completely out of the box. I don’t think this kind of character has been portrayed on screen in Pakistani cinema,” he enthused. “He addresses himself in the third person as ‘Waseem Wallay’. He takes himself very seriously.

“This guy is a little unpredictable and has his own way of dealing with emotions which is very edgy sometimes.”

There’s reported to be a ‘male item number’ in the film with some 200 transgender dancers alongside Rasheed.

Rasheed said that Wallay has left an indelible mark on him.

Did he see himself then developing then as comic character actor?

“I don’t want to stereotype myself, I would like to experiment with all genres.”

He said right now there are a lot of different opportunities.

“Pakistani cinema is in a transition phase, there’s a lot of experimentation and the signs are very encouraging, there is variety and diversity, the industry is not following a typical formula; in other places, producers are a little reluctant to experiment but right now (in Pakistan) writers and directors and actors are very open to experimentation.”

You don’t imagine Hocane’s character to be a passive vessel through which the men will express themselves and win her hand by means fair or foul – though no doubt that is likely to be part of the drama.

Hocane chooses her films according to her instincts and liked this because it had a balance of things and was different.

“I follow my heart. The take on love and emotions was very interesting, and very different.

“She’s a beautiful girl at heart, it’s the music that connects me with my co-stars and the music drives the entire film.”

Her character is both strong and feminine and she says the industry is receptive to women – even when they are like her.

“There are so many strong women who inspire and motivate me and I truly look up to them and admire their strength. The world does need strong women.”

For her the film is “musical, romantic and intense”.

“There’s a lot of drama and the clashes are interesting.”

The three are all quite well-established in Pakistan and Hocane and Ashraf are pin-ups with large fan bases both at home and abroad (in the UK, US and Middle East); while Rasheed has also done a lot of theatre.

All in all, it’s an intriguing mix and if the film is half as good as the way the three talk about it, you might feel that Pakistani cinema is making its way internationally (as ‘Janaan’ from the same stable did last year).

Rangrez is a term used in Sufi music and comes from the Persian word which is understood to translate literally as a dyer (painter) – but in an emotional context often refers to the colours and feelings of (painting) love.

‘Rangreza’ is on release globally from Thursday (December 21)