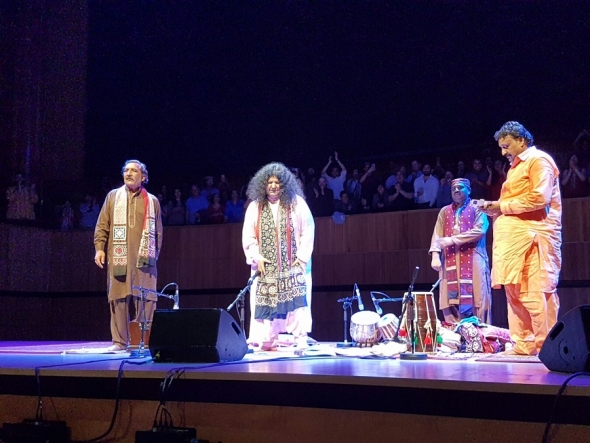 It was spiritual, deep, unforgettable, it was…

SHE CAME, she sang and she most definitely conquered. It was ten years since Abida Parveen had performed in London and the Royal Festival Hall auditorium was full to expectancy. Apart from some initial gripes about the pricing of tickets ranging from £10 – £100- this global superstar of Sufi song was warmly welcomed.

She was accompanied by three musicians playing harmonium, dholak and tabla, and she began with a rendition of ‘Man Kunto Maula’, a song composed by Amir Khusro, a 13th century Sufi musician, poet and scholar, in praise of Hazrat Ali, the son in law of the Prophet Mohammad.

This was followed up by the perennial favourite, ‘Yar Ko Hum Ne Ja’ (‘When I saw my beloved’) by Hazrat Shah Niazi, a 17th century Sufi. Another popular number was, ‘Meda Isqh bhi Tu’ (‘You are also my Love’) by Khawaja Ghulam Farid, a 19th century Saraiki Sufi poet into which she mixed some of Bulleh Shah’s verse. This 17th century poet and philosopher wrote in Punjabi and she sang in both the languages which do have some similarities in dialect.

She followed this up with a 20th century ghazal, ‘Jab Se Tune Mujhe Diwana Bana Rakha Hai’ (‘Ever Since I have become Mad in Your Love’) by Hakim Nazir.

The audience began shouting suggestions of songs to her, but Parveen was following a familiar repertoire wherein she improvised on the verses. Among the crowd there clearly devotees who wanted her to sing more kafis eulogizing Hazrat Ali, (which she did as part of her song list), she deftly fended off many requests that people started clamouring for her to do. There was also more Bulleh Shah and Khusro poetry in the mix.

Parveen’s performance was hypnotic and moving as are the lyrics of these many poems that she rendered with deep emotion. When the concert ended, the people in the auditorium came up to the stage and wanted to touch the end of her hem or her hand, as if she herself embodied that spiritual connection through her voice. Parveen accommodated all of them by walking from one end of the other before disappearing through the door that led to the Green Room.