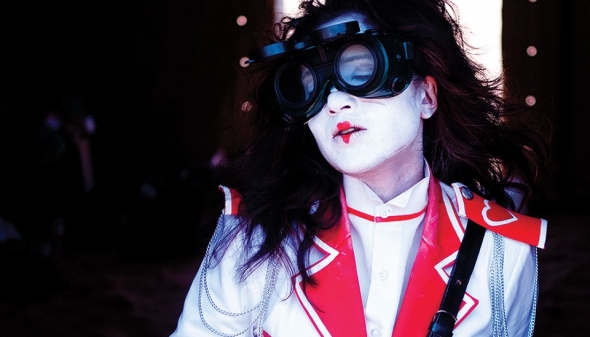 THERE’S no doubt that the quixotically named Indian director ‘Q’ has a great film in him.

When ‘Tasher Desh’ (‘Land of Cards) showed at the London Indian Film Festival (LIFF) in July, there was both love and consternation.

It was left to London-based lead actor Soumyak Kanti De Biswas and production designer Opashona Ghosh to ‘explain’ the film. Not easy.

They nevertheless did a sterling job, talking about how the film might go down in India (it is released today, August 23), what it means for Kolkata (Q is Bengali, as is the language of the film), and how the director has imaginatively conjured a film – from a Tagore classic – of which the 20th century Nobel Laureate may even appreciate and enjoy, according to De Biswas.

“He’d probably have a cup of tea and go for an atta (conversation),” he quipped.

Moderator Naman Ramachandran and LIFF programmer  was left to  explain that ‘atta’ was not always flattering, and could be interpreted as self-pleasuring waffle…ahem.

Music, suggested De Biswas, is central to Q’s mission and filmmaking; in another guise, he is also a very passionate rapper, as anyone who saw him perform last year at the British Film Institute (BFI) South  Bank in London, can testify. Music forms its own narrative in ‘Tasher Desh’.

De-Biswas explained: “We’ve seen the way Q works  – he writes the songs first – in ‘Tasher Desh’, he made those songs first, even before thinking about anything else and in a way the sensibility inspired his way of making the film.”

‘Tasher Desh’ has two very distinctive segments; the first is set in a castle and features two bored young men (one a prince and his friend) playing out a life on the outside; they have luscious female companions, live in gilded circumstances and generally don’t know what to do with themselves. There is a sense of alienation, boredom, and possibly a meaningless hedonism. It is hard to tell in which century these characters are located.

Nothing is ever made easy in a Q film; he wants and needs you to work at interpreting or create meaning, and without any knowledge of the original, you really have to engage with the images to get a sense of its purpose.

Therein lies the challenge and the attraction  – for those bred on a diet of popcorn masala movies, this will be pretentious,  arty and way too slow, but even if you’re prepared to travel with Q and we are, there are still questions and concerns.

His debut effort, ‘Gandu’ (asshole), was an in your face exploration of one young’s man frustration and anger with the world, told with tremendous energy and passion and fuelled by narcotic revelry.

Some scenes were extremely explicit (pornographic), especially by Indian standards, and to our knowledge the film remains officially banned in India. Yes, there was explicit sex in it and no, it’s not simulated, it’s real.

In ‘Tasher Desh’, Q leaves aside the punk values and thumping sound track of ‘Gandu’ for something more mature, considered and reflective.  It shows his growth as a filmmaker and this time the protagonist has a greater range of emotions other than ire, fire, lust and longing.

Some of the images in the first part of ‘Tasher Desh’ are stunning and incredibly seductive and there’s little doubt of Q’s talent – our only slight concern is that some scenes are slightly redolent of glossy perfume ads, but it’s not a massive quibble.

The second half of the film is more engaging and urgent – and set in what looks a quasi-authoritarian military ruled island state (shot incidentally in Sri Lanka and very pretty too it looks). The costumes and set design are tremendous,  more so when you appreciate this is not a big budget production.

This part is compelling and has a more obvious political overtone. Considering Q’s politics leans towards the anarchic, there’s great passion and intensity and the two young men a little inadvertently foment rebellion and opposition to military rule.

Not only is there a break down in order and a much freer expression of sexuality and desire,  but the very foundations of authoritarian rule begin to crumble before our eyes.

If anything, it’s a little too easy – witness what’s happening in Egypt as the military reassert their authority over what is a divided nation. There’s a very direct allusion to all this when the film ends, there is a collage of images from the Arab Spring.

In Tasher Desh’s world the merest prick on authority triggers an almighty revolt.

However, authority has a way of recasting itself when challenged and will do anything to survive.

Here Q seems to suggest that a false moral imperative holding a society together will simply collapse at the very moment everything becomes obvious, clear. People just need to appreciate the absurdity of their existence (in such societies).

It’s beautiful, challenging and perhaps a little self-indulgent, but having said all that, Q is definitely part of a new wave of Indian directors who really have something to say, beyond entertainment.

This may not be a great film, but it’s worth seeing, knowing you’re watching a director who is just getting better and better and may yet hit the world stage in a big way. Enjoy, if you dare!