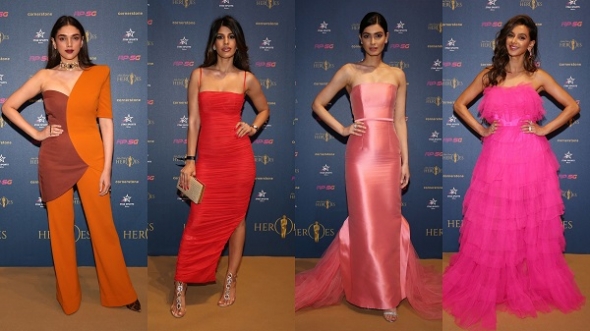 ENTERTAINMENT stars turned out in force to support the Indian cricket team as they bid to become World Cricket Champions in England & Wales this summer.

Bollywood star Diana Penty who made a considerable splash at the Cannes Film Festival and spoke to www.asianculturevulture.com there, was among the guests who gathered for the inaugural India Cricket Heroes Awards at Lord’s Cricket ground in London.

Momtaz Begum-Hossain, ACV’s award-winning fashion journalist, who interviewed Penty in Cannes, commented: “There seems to be something of a theme with the dresses – it’s the same orangey red hues, so there’s clearly a ‘bright’ trend palette for this summer.”

Also making an appearance on the Gold Carpet, as it was dubbed, was Bollywood actor and singer, Farhan Akhtar.

There were also more famous names from the world of sport Manish Bhasin, TV sports presenter, and India team captain Virat Kohli and other members of the Indian cricket squad, who gathered for a photocall at Lord’s Cricket ground in London last Thursday (May 23).

The ICC (the game’s global governing body) World Cricket Cup begins today at The Oval in South London. England take on South Africa in the very first game of the 2019 World Cup Cricket.

Over the next six weeks, 10 countries including Pakistan, Bangladesh, Sri Lanka and Afghanistan will vie to become ICC World Cricket Champions.

To see a photograph (below) on its own and use > and < to flick through, you can return to page by clicking x in top right of photo, for caption please put cursor over selected picture…