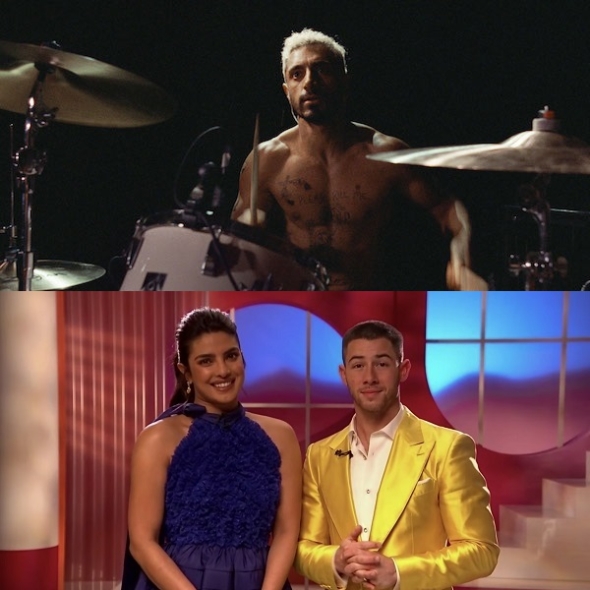 🎥‘Sound of Metal’ gets Best Motion Picture nomination and five other category nominations.

🎥 ‘Mank’ directed by David Fincher has highest number of nominations 10 in all.

🎥 Indie feature ‘Minari’, a story about a Korean-American family settling in the Ozarks (mid-west US), gets Best Picture nomination and five other nominations alongside 5 other films that also have six nominations in total

RIZ AHMED told www.asianculturevulture.com that he was impressed by both the story and the director Darius Marder when he was approached to play the part of Ruben in ‘Sound of Metal’.

Speaking to acv at the film’s world premiere at the Toronto International Film Festival (TIFF) in 2019, he said he was impressed with all involved and accepted it would be a lot of work – today that diligence has been repaid handsomely.

Ahmed, from Wembley, London, was this afternoon handed his first Oscar nomination for his leading role in ‘Sound of Metal’.

He told acv in Toronto that the film was a real journey, and he learnt how to both drum and American Sign Language for its making. He loved the film because it didn’t portray deafness as a disability but “a culture”. (See the link for the interview below).

The film also was named in the Best Picture of the year category putting it up against much bigger budget films. Produced by Amazon and released late last year in the UK, its rising stature has taken some by surprise. It is not available in the UK on Amazon Prime and because of lockdown restrictions its cinema release here was patchy at best.

Marder is a first-time narrative fiction director with only a previous documentary film behind him. This film is about a heavy metal drummer who loses his hearing and how he copes with the consequences – Ahmed is mesmerising and holds the film together with a performance of immense power. It is hard to think of anyone who could carry the part in the way that he does – and arguably is as good as – if not even stronger than in his own co-scripted, ‘Mogul Mowgli’ also released last year.

What seemed like a quite a small indie film has catapulted Ahmed onto the A-list of Hollywood actors.

Now based in the US and married, he said the time when he made ‘Sound of Metal’ was both professionally and personally a period of growth and development and so it has proved.

There is also cheer for the India-set film, ‘The White Tiger’ with Iranian American director Ramin Bahrani being nominated for an Oscar in the Adapted Screenplay section.

He took his college friend, Arvind Adiga’s Booker Prize winning novel of 2008 , and turned into a cinematic tour de force, aided by an exceptional lead performance from newcomer Adarsh Gourav who was recognised recently in the Bafta nominations. (See the link for our interview with Bahrani below and our Baftas story).

There were smiles too for Oscar nomination hosts Priyanka Chopra Jonas and her husband Nick Jonas who announced all the nominations from London in front of a colourful computer generated screen backdrop, at around lunchtime UK time today.

Chopra Jonas is an executive producer of ‘The White Tiger’ – which is available on Netflix and hence the smiles when the couple announced that category.

Indie film ‘Minari’ is a stand-out performer of a smaller non studio and global streaming produced content – it premiered at Sundance last year and won awards there.

It garnered a best picture nomination, directing category nomination for Lee Issac Chung, acting nominations for Steven Yeun (Leading Actor) and Youn Yuh-Jung (Supporting). These are the first ever for Asian Americans at the Oscars. ‘Minari’ also got nods in music, and original screenplay. Could it now follow on from ‘Parasite’s’ incredible success last year?

It is distributed by A24 in the US and is set to become available in the UK on demand and online from April 2 and – from April 12 at open air cinemas (pandemic restrictions permitting).

A number of British actors have been nominated – including Daniel Kaluuya in a Supporting Role for ‘Judas and the Black Messiah’ – which also has six nominations and is about The Black Panther Party in the US in the 1970s.

Oscar history has also been created for the first time – two women directors have been named in this category.

Chinese-American Chloé Zhao, fresh from her Golden Globes success with ‘Nomadland’ and Brit Emerald Fennell for ‘Promising Young Woman’. Both stories are about women seeking a different life and the challenges that conventional society throws up against them.

The most successful film in terms of nominations is ‘Mank’ with 10. It is a period piece about screenwriter Herman J Mankiewicz, as he races to complete the screenplay for the celebrated ‘Citizen Kane’ (1941) – Orson Wells’ film still regarded as one of the best ever made.

As well as ‘Sound of Metal’ and ‘Minari’ with six nominations, there is also ‘Judas and the Black Messiah’, ‘The Father’, ‘The Trial of the Chicago 7’ and ‘Nomadland’.

In ‘The Father’, Sir Antony Hopkins plays an aging figure who is succumbing to a profound dementia. Sir Anthony is nominated in the Leading Role and Oliva Colman in a Supporting Role. The film is an adaptation of an original play in French by Florian Zeller who changed it with Brit Christopher Hampton – both are cited in the Adapted Screenplay nominations list.

In Aaron Sorkins’ (‘The West Wing’) ‘The Trial of the Chicago 7’ is about a group, who are charged with responsibility for an uprising at the Democratic Party National Convention in 1968 in Illinois. It’s available on Netflix.

Just behind these films in terms of nominations is ‘Ma Rainey’s Black Bottom’ with five and ‘Promising Young Woman’ also has five.

In the Actor category there are nods for Chadwick Boseman and Viola Davis in ‘Ma Rainey’s Black Bottom’ which is available on Netflix – and also in nominations for costume, make-up and hairstyling; and production design. Adapted from a play by African-American stage colossus August Wilson, it is about the tensions between Ma Rainey (Davis), a celebrated blues singer, a band member played by Boseman and her white management.

Another African-American woman in the spotlight is Andra Day, who is also in the Actress in a Supporting Role category for her portrayal of the great singer Billie Holiday in ‘The United States vs Billie Holiday’. The film is available on Sky Cinema in the UK.*

Elsewhere, the other British actors to get nominations are Sacha Baron-Cohen (‘The Trial of the Chicago 7’), Carey Mulligan (‘Promising Young Woman’), and the pair in ‘The Father’.

The film, ‘One Night in Miami’ which acv saw at the virtual TIFF last year has three nominations. It recounts what happens fictionally when four iconic black men – Muhammad Ali, Sam Cooke, Malcolm X and iconic American football star Jim Brown, meet to talk about their experiences, hopes, fears and dreams just after Ali wins a world title fight in 1964.

Leslie Odom Jr gets a nod for a Supporting Role. He plays Soul sensation Sam Cooke, Brit Kingsley Ben-Adir, who reprises the role of Malcolm X in the film, misses out on an possible Oscar this year, but is a Bafta Rising Star nominee.

The Oscars ceremony will take place on April 25 and will be broadcast from both Union Station in Los Angeles and the Dolby®Theatre at Hollywood & Highland Center®in Hollywood in what is likely to be a hybrid physical-virtual ceremony.

One Night in Miami review- http://asianculturevulture.com/portfolios/tiff-2020-one-night-in-miami-inspirational-and-unforgettable-like-the-men-portrayed-in-this-brilliant-film-which-is-a-meditation-on-power-and-how-to-use-it-review/

Privacy & Cookies: This site uses cookies. By continuing to use this website, you agree to their use.
To find out more, including how to control cookies, see here: Cookie Policy
← ‘Hotel Mumbai’ – emotional world premiere for film about Mumbai attacks – Dev Patel and Anupam Kher shine as Indian heroes
Toronto International Film Festival (TIFF) what and who to look out for as festival gets under way… →