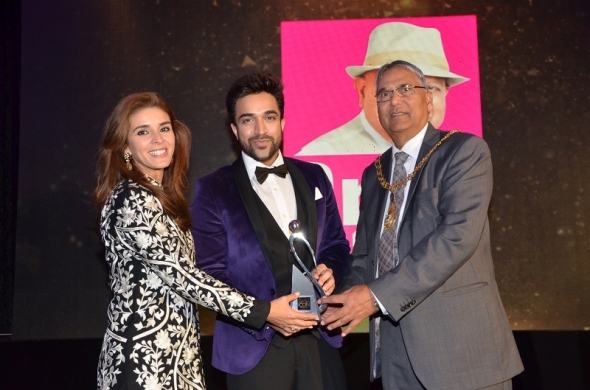 London is a magnet for those looking to make a global mark, say those behind an inaugural awards event in the capital recently…

BRITISH singer Navin Kundra and cricketing superstar Sir Clive Lloyd were among the award-winners at the first ever Society Global Indian Icon Awards in London.

Held in the UK for the first time by the iconic Indian magazine, Society and parent company, Magna Publications Group India – 15 high-fliers were presented with awards for their contribution to different fields.

Among these were well-known Kuchipudi dancer Arunima Kumar. She was presented with a Society Global Icon Award for her outstanding achievement and excellence in the performing arts. Many of the award winners were business figures.

There were warm words too for outgoing Indian High Commissioner YK Sinha, whose term is now almost complete.

He was the subject of a farewell facilitation at awards ceremony on October 10 at the Montcalm Hotel, near Marble Arch.

Chef Atul Kochhar was also presented an award for his achievements in creating one of the first Indian restuarants in London to achieve a Michelin Star. He was embroiled in controversy earlier this year and apologised for comments which were seen as being critical of Islam in India.

Among the other high-profile guests were billonaire business figures, Anil Agarwal of Vedanta Resources and GP Hinduja; and Virendra Sharma, MP for Ealing Southall, and pop singer Raageshwari.

Navin Kundra speaking to us before his award

Anushka Arora, of Sunrise Radio, was the compere for the event.

Nari Hira, chairman of Magna Publications Group, told www.asianculturevulture.com he was keen to return to London as a venue for his magazine’s annual international icon awards. Magna produces a stable of popular magazines in India, including Stardust and Savvy.

The awards were sponsored by Dr Bhupendra Kumar Modi (known popularly as ‘Dr M’) – he has recently set up a film fund, which does everything from taking scripts and delivering them through production and distribution and is actively engaged in seeking out multi-national projects with a global appeal.

A tech entrepreneur and US MBA grad, who lived in Beverley Hills, he has good contacts in Hollywood and Bollywood and helped to make the Akshay Kumar Bollywood film ‘Oh My God’ (2012). He has also produced a glossy high-end TV series about the life of Buddha.

In 2012, he set up the Global Citizen Forum to encourage individuals to share knowledge and best practice across nationalities, ethnicities and cultures.

Now based in Singapore, he wants his film company to have more of a digital footprint across the globe, spurred by projects which are multi-dimensional and transnational too, he intimated.

“We are getting into the more creative aspect of the industry. It is more of a writers-producers’ situation now,” he told acv.

“Instead of doing just one project a year, we can work on multiple projects at the same time because of streaming platforms such as Netflix and Amazon.

“We are taking on the whole development cost, and the creative ideas behind a project.

“We start with a script or a book and scripts are always welcome.”

He said he was looking to promote the idea of being a global citizen too, especially now that Britain looked to be moving away from Europe, more so in the wake of Brexit.

“London is a great, global city, there is a great synergy here.”

ACV comment: The capital plays hosts to many events, even in the British Asian social calendar and some are far better than others; this was impressive in being able to attract heavyweight business figures in Agarwal (who made an interesting but rambling speech about his rise from Bihar to the City of London where his company is listed) and GP Hinduja – and many of these award winners are tilted towards business and industry, are not familiar to us and lacked sufficient context – the voiceover did not work particularly well and too much of the audience remained distracted for large parts of the awards ceremony. Furthermore, some guests were disappointed to find red mulled wine in a bottle on the table – unusual to be served cold, even more so on a relatively warm October evening!

Dr BK Modi, sponsor of #SocietyIconAwards tells us what is behind his Dr M Singapore Film Fund and why #London was the perfect venue for it @SmartStudios_ (Producers of #Bollywood #ohmygod #AkshayKumar and #PareshRawal ) @Society_Magna @FazzPRandEvents pic.twitter.com/jNB9tAdpch

Navin Kundra talks to us about that Bollywood debut and what he is dong next… (recorded before he received his award).

Singer @NavinKundra speaking to us before his #SocietyIconAwards – story out soon… @Society_Magna
'I know what you are doing but I can't tell you (yet)!' Good Luck Navin with your #Bollywood debut! pic.twitter.com/F9oRFvucoG

Privacy & Cookies: This site uses cookies. By continuing to use this website, you agree to their use.
To find out more, including how to control cookies, see here: Cookie Policy
← ‘Sitara – Let Girls Dream’ – Oscar winner Sharmeen Obaid-Chinoy tells acv why she wants to make animation films and her own inspiration…
‘At Home in the World’ – Arts charity offers £1,000 to Asian creatives to produce work online as a response to current global pandemic… →