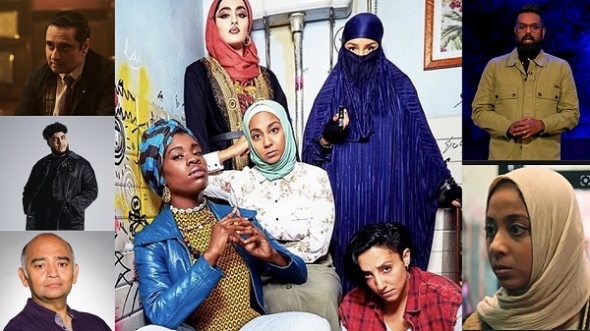 ANJANA VASAN – the star of the Channel 4 hit comedy drama series, ‘We are Lady Parts’ – has reacted to the show’s six Bafta TV nominations and her own nomination for best Female Performance in a Comedy programme.

She said: “What is happening?!?!?! Never in my wildest dreams” she told her followers on Instagram.

‘We are Lady Parts’ is bettered only by ‘It’s a Sin’, ‘Landscapers’ and has the same number of nominations as ‘Help’ and ‘Time’ and outscores both ‘Sex Education’ with five and ‘A Very British Scandal’ with four.

In ‘We are Lady Parts’ Vasan, plays the character of Amina Hussain, who reluctantly signs up to joining the three members of an all female, Muslim Punk band, led by vocalist and guitar player Saira (Sarah Kameela Impey), alongside bass guitarist, Bisma (Faith Omole) and drummer Ayesha (Juliette Motamed).

Channel 4 first described it as an “exuberant music comedy” and this first series centres on the mission to persuade Amina she can play with the band successfully – despite her personal performance issues (she vomits on stage) and dangles the prospect of a date with her crush and the brother of Ayesha (Ahsan played by Zaki Ismail) as the bait.

Vasan – who won huge critical acclaim for her stage performance in Tanika Gupta’s Raj adaptation of the Ibsen classic ‘A Doll’s House’ at the Lyric in Hammersmith in 2019 – can currently be seen in BBC TV’s ‘Killing Eve’ and www.asianculturevulture.com talked to her after her role in Riz Ahmed’s and Bassam Tariq’s ‘Mogul Mowgli’ (2020).

Bywater took to Twitter to respond: “In such great company! Thank you Bafta”

Designer PC Williams reacted to her nomination in the Costume Design category: “It’s not everyday you receive these kinds of emails…I am a Bafta nominee! I feel so blessed.”

It’s a huge triumph for showrunner Manzoor, who while not being a novice to writing for TV, took the show to production company Working Title and got it greenlit.

She revealed that the show was a family effort, as her brother creates the music for the series. She along with Impey, and Omole and producer Sarah Fletcher-Jones spoke to Tan France at the Edinburgh TV Festival last summer about its creation and making. Series 2 was commissioned last year.

Manzoor has just wrapped production on her first feature film – ‘Polite Society’. It is described as an action comedy set in London and has a number of British Asian actors in it.

His character DI Khan is rarely seen without his backpack and it is a long running joke in the series. The drama written by one of British TV’s most successful writers, Chris Lang, featured Bhasker and Nicola Walker, as DCI Cassie Stuart investigating long forgotten ‘cold’ murder cases. ITV recently announced that Sinéad Keenan will take over the role as a Khan’s new work colleague and police boss, following DCI Stuart’s death in Series 4.

Bhasker Patel, one of the stars of ITV soap ‘Emmerdale’ which is nominated in the Soap and Continuing Drama category, told acv: “It means a lot to all of us – especially to get recognised by your peers.

“It’s also acknowledges all the hard work that goes into making continuing drama. We nurture talent.”

This year one of the most prominent storylines has centred around two sisters Manpreet Sharma (Rebecca Sarkar) and Meena Jutla (Paige Sandhu) who plays a murderous nurse whose crimes have been uncovered and she is about to testify at a trial and possibly implicate Manpreet.

Romesh Ranganathan has not reacted to his BBC show, ‘The Ranganation’ being nominated in the Comedy Entertainment Programme category. He won a Best Entertainment Performance Bafta last year.

Poppy Begum gets a Bafta nod in the Emerging Talent category for directing ‘Queens of Rap’ on Channel 4.

Shereen Shimmin and Gurdip Mahal are part of the production team for ‘Ant & Dec’s Saturday Night Takeaway’ which is up for the Entertainment Craft Team award.

One of the most off the endearing responses was from rapper and Grime Artist Big Zuu. Nominated in the Entertainment Performance strand for his ‘Big Zuu’s Big Eats’ – a self-taught chef, he invites celebrities to eat his food and has had comedian Gus Khan among those on the show. The series is available online and through the Dave channel. He thanked those involved in the production and said: “…Please understand how mad this for us when we are on a digital channel competing with national broadcasters. PLUS MANS FROM THE HOOD ARE U MAD!!!” on his Instagram feed.

In the prominent individual categories, Nonso Anozie who has been nominated in the Best Supporting Actor category, came up with a charming response to being nominated, saying he was in shock, was humbled and declared: “Anyone who knows me knows I just do my job and go home. I am not used to this stuff. What a blessing. God is truly good. I’m well and truly chuffed.”

He went on tag his colleagues in ‘Sweet Tooth’ which airs on Netflix. Set in a post-apocalyptic world, and centred around a boy, who is half-deer, half-human, Anozie plays his gruff protector. The British-born 6ft 6ins actor has been in several films and is listed as a producer as well.

Nominated in the same category is Omari Douglas who is in ‘It’s A Sin’.

Currently in Mexico filming, Douglas said the nomination was “surreal” and offered his ‘It’s A Sin’ family, “the biggest hugs”. Of course he is just one of the 11 categories the TV drama finds itself in this year.

Written and conceived by Russell T Davies, it received widespread acclaim and charts the lives of a group of men whose lives were either taken by AIDS or blighted by ignorance and prejudice to HIV when it was first identified in the early 1980s. The series went out on Channel 4 at the beginning of the year.

Tahirah Sharif reacted with a “AHHHHHHHHH! Takes a breath” on her Instagram Story after learning of her nomination as Supporting Actress in ‘The Tower’. A police procedural drama it screened on ITV in November.

One of the stars of the Netflix drama, ‘Sex Education’, Ncuti Gatwa, said simply thank you and recognised some of the other nominees – not just from ‘Sex Education’ – for his nomination in the Male Performance in a Comedy Programme. Set in a British high school, the comedy drama centres around relationship issues of a group of pupils.

Samson Kayo nominated in the same category for his role in ‘Bloods’ just posted the Bafta picture of all the nominees on his Instagram Story board. ‘Bloods’ is a comedy drama on Sky, in which Kayo plays paramedic, ‘Maleek’, alongside an older crew partner, Wendy, played by Jane Horrocks.

The one-off documentary, ‘My Childhood, My Country: 20 Years in Afghanistan’ also gets a Bafta nomination in its genre. Shoaib Sharifi, BBC Country Director, and part of the production team behind the documentary did not react on his Twitter account at the time of going to press. Sharifi is also cited in the Factual Photography category.

In the International category, there’s a nomination for ‘Moonlight’ Oscar winning director Barry Jenkins’ series, ‘The Underground Railroad’ which is on Amazon Prime. Adapted from a Colson Whitehead novel, and about an imaginary escape from slavery in the US in the 1800s, around a ‘real’ or imagined railroad, the series which first dropped in May, has been critically acclaimed. ACV saw clips before the series dropped and reported the chat between Jenkins and music composer Nicholas Britell had during a chat at the SXSW Festival in March last year.

The main Bafta TV awards will be held on May 8 at the Royal Festival Hall in London.

For all the nominations see: https://www.bafta.org/television/awards/tv-2022

Privacy & Cookies: This site uses cookies. By continuing to use this website, you agree to their use.
To find out more, including how to control cookies, see here: Cookie Policy
← ‘The Black Prince’ (review) – Empire’s forgotten son rides back into British memory…
‘We That Are Young’ – Preti Taneja’s debut novel is a rich and powerful exploration of young nation and its youth caught in a time of immense flux… →