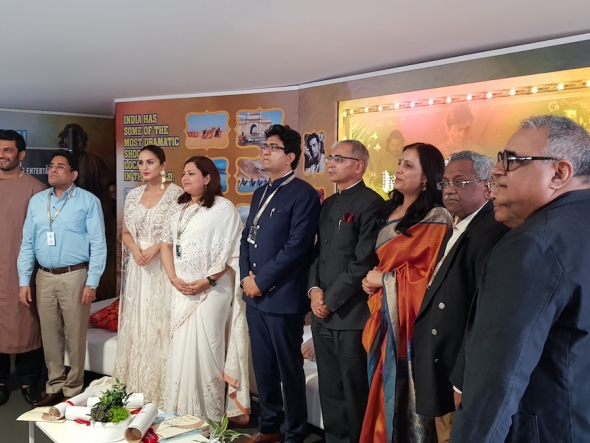 IT’S BEEN a very busy morning here at the 71st Cannes Film Festival as we open our coverage of this year’s festival.

We have presenters Sunny and Shay Grewal and baby Tyra with us.

Tyra is believed to be the youngest accredited delegate to the festival, at just eight months. Shay said the festival was making a special effort to accommodate working mothers.

The India pavilion opened today officially and we were there to cover it.

Indian film star Huma Qureshi, here with French drinks brand, Grey Goose, spoke to Shay at length about her previous visit to Cannes in 2012 for www.asianculturevulture.com.

That was for the film, ‘Gangs of Wasseypur’ and effectively the entrance of Anurag Kashyap to the world filmmaking stage.

Few people knew about Kashyap or Qureshi then, but both have gone onto build stellar careers and arguably, Cannes gave them their first really significant international break. Qureshi talks about how much of a game changer it was not only for her, but Indian cinema. That interview will be here. Subscribe and you won’t miss it!

Kashyap told us in a 2016 Cannes interview that he has had 10 films here in different capacities (writer-director-producer) – it began with Gangs and encompasses ‘The Lunchbox’, a massive global hit and one of the few Indian films to have got a wider mainstream UK cinema release in recent times. That film premiered at Cannes, and arguably illustrates how important the film is as an international market place and how films made from distant lands can end up being shown around the world.

That theme was expanded upon today at the opening of the Indian Pavilion.

India’s ambassador to France, His Excellency Vinay Mohan Katwa, spoke at length about how India wanted to connect and dialogue with the world through its films.

This year the government and the Federation of Indian Chambers of Commerce and Industry (FICCI) are showcasing four particular films at the festival.

These are ‘Village Rockstars’, (Assam state); ‘Bhayanakam’ (Kerala); ‘Nagarkirtan’ (Bengal); ‘Sinjar’ (Lakshwadeep). The four are in different Indian languages – and none are in Hindi or Punjabi but all are national award film winners in India.

Vani Tripathi Tikoo, from the central board of film certification and an Indian actor, producer and director, said different parts of the film industry had come together to help promote Indian films and Cannes was an important platform.

Prasoon Joshi, chairman of the central board of film certification in India, said it was important for Indian filmmakers to reach out to the world and the rest of the world to listen, as well.

It was not just about connecting with a huge marketplace (of more than a bilion people) but also of listening to people with authentic experiences and being alive to people who lived the truths about themselves – and was not just a second-hand experience.

Just as we might delight in a fisherman going about his daily work, we had to be ready for to hear what that fisherman has to say about his life and work.

He said festivals like Cannes were in danger of coming across as being too elitist, if they were not ready to hear about stories from far and wide and people who lived experiences.

In some ways, he was making a political point – you have to be ready to accept Indian films on their own terms and not just those of the West.

More from us soon, follow coverage in real time here and talk to us here and use #Cannesacv18 to do that…

Privacy & Cookies: This site uses cookies. By continuing to use this website, you agree to their use.
To find out more, including how to control cookies, see here: Cookie Policy
← UK Asian Film Festival 2019: Ramesh Sippy interview, Closing Gala: Radhika Apte, Kiran Juneja Sippy, and picture gallery, coming soon…! (Click to enlarge)
Ramesh Sippy – director of legendary Indian film ‘Sholay’ talks about his career and what he wants to do… →