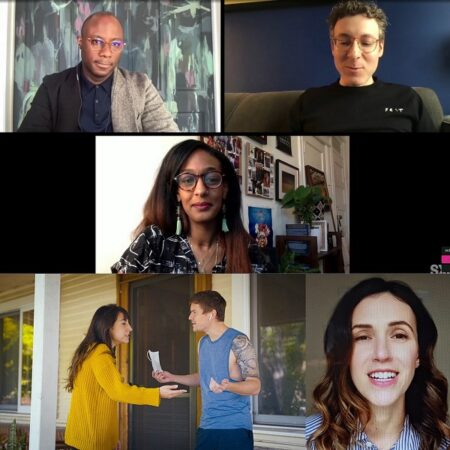 Do online festivals work? Yesterday’s opening of SXSW did for acv…

ARGUMENTS as to whether online festivals really work were quietly laid to raid rest yesterday (March 16) – at least for acv and thanks to filmmakers Barry Jenkins and Nicholas Britell.

They do work – at least in this part of London as SXSW (March 16-20), which normally takes place in Austin, Texas, dropped to online audiences spread across the world. There was little that was different – except it was mid-afternoon, getting dark and still very much winter here in London when we tuned in.

Jenkins and Britell were in the US in different locations as was moderator Hannah Giorgis from The Atlantic but through the web many around the world were watching.

We along with a few thousand others were able to tune into three sessions of the many yesterday – an opening welcome address by yoga (and Lockdown) star Adriene Mishler – whose yoga videos are a Youtube sensation.

ACV also watched one of the most eagerly anticipated films of the festival – ‘The End of US’ – which is about a couple falling out and breaking up just as the Lockdown and Stay at Home order kicks in, in California. The film was made during Lockdown (read our review below).

Most impressively of all though, for acv, was the incredible exchange between Jenkins, director of the Oscar-winning hit, ‘Moonlight’ (2016) and his music composer for that film and their forthcoming, ‘The Underground Railroad’.

Adapted now by Jenkins from the Colson Whitehead Pulitzer-Prize winning novel of 2016, the music used for this episodic drama to drop on Amazon Prime has been sparking huge interest and curiosity.

When acv first saw the film ‘Harriet’ – about Harriet Tubman, who made it her life’s work to help former slaves from the South escape to the North in the US – at the Toronto International Film Festival (TIFF) in 2019, it wasn’t aware that the railroad was a conceptual idea – in essence, there was no physical or actual clandestine ‘railroad’ but there was ‘a system’, whereby black former slaves could escape from the South and make it to clear freedom in the north. It was never easy and perhaps calling it ‘a system’ is a stretch. There was a path, of sorts and aided and supported by great figures, such as Tubman – but at no little cost to life and limb as they evaded slave owners and bounty hunters and other people who had an interest in maintaining slaves.

The two men collaborated over 2020 (during Lockdown) in making the music for the drama by ‘reversing’ the score, crudely and/or ‘chopping’ – slowing a normal piece down and ‘stretching’ it.

Revealingly for this project they asked: “How do you create the (opposite) sound of freedom?”

Answer: “By harming the sound of love.”

The two showed clips from the drama which will premiere on Amazon Prime from May 14.

They also played some of the music ‘normally’, showing how different in tone and aesthetic the originals are to the finished compositions used in the drama.

Britell worked with an orchestra in London. (He didn’t specify whether this was an established orchestra or one brought together to play tracks he could work with).

He told viewers that he could not have done this type of work without lockdown already showing the way – in that he set up a big screen and worked in real time with the musicians despite being in the US and the orchestra being in London.

ACV thoroughly recommends you catch this work – see the trailer link below and witness the art these two men are creating. It was stunning and unforgettable.

The two men first met as Jenkins assembled his team for making ‘Moonlight’. Britell asked a mutual contact whether he could read the script after the friend who was helping to produce Jenkins’ film, said it was one of the best. Britell said to this day, it was one of the best he had ever read too, and described it as a “poem”.

He asked the contact if he could meet Jenkins. They met in LA for coffee, which became a long exchange, discussing films, music and life over a bottle of wine. Jenkins said he became convinced Britell could do the job even though he hadn’t ever scored a feature before. The film won Oscars for Best Picture, Best Adapted Screenplay and for Best Supporting Actor (Mahershala Ali) and Britell was nominated for Best Original Score and was among four other Oscar nominations.

One of the opening sessions of SXSW was Opening remarks: Befriending the Breath with Adriene – as she welcomed delegates to Austin ‘virtually’. She told us a little about her life journey and her background as an artist and actor and then went through some simple breathing exercises.

On the chat function for delegates in real-time, there was much chatter about Benji, the dog you can see in some of Adrienne’s Youtube videos. No Benji yesterday.

The End of Us
Steven Kanter and Henry Loevner
CHARMING, amusing and quirky, ‘The End of Us’ tells the story of Nick (Ben Coleman) and Leah (Ali Vingiano) who are a live-in couple and fall out of love, just as the world is going into Lockdown.
Nick is an aspiring actor and is having little luck on that front, while Leah has a steady job in the travel industry – which as we all know virtually collapsed back in March and April of last year. The two split but are unable to make the break clean – Nick has nowhere to go and Leah can’t simply throw him out because of the pandemic.
There are some good moments in what might normally be just a break-up drama – but Lockdown and the conditions inspire a world we have all come to recognise all too well.
But for the chemistry and likeability of both characters, especially Nick played with an effortless rogue’s charm by Ben, it might be a little too slight for some. However, it is a film of the moment and some of the generational insights – as Leah turns 30 during Lockdown, make for more telling commentary. Made by two experienced former Buzzfeed video editors, it is certainly an accomplished first feature.
Acv rating: *** (out of five).

If you are registered as attending, these sessions are available online currently.