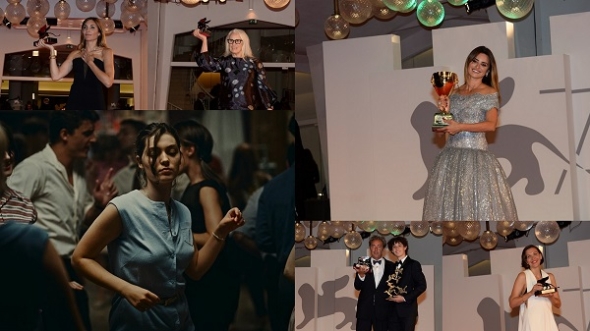 COLLEGE friends Annie, Helen and Bridget get ready to go dancing, but when they enter a dance hall, it becomes clear that the rules there are dictated by men.

The story takes place in provincial France in the early 1960s, a time when girls were forbidden to have abortions. It is illegal and they can be jailed for murder. Annie is unlucky, she is the most talented student in her college in Angouleme but now faces a dilemma – whether to leave her studies and turn into a housewife or take the risk of getting rid of an unwanted child.

This is the story of ‘L’Événement’ (‘Happening’) by French director Audrey Diwan which was awarded the Golden Lion – the main prize of the Venice Film festival last evening (September 11).

Adapted from the autobiographical novel by Annie Ernaux, Diwan is better known as a screenwriter and ‘Happening’ is only her second film as a director.

It’s the second year running a woman director has picked up the Golden Lion – last year it was Chloe Zhao’s ‘Nomadland’ and we saw what success that went on to – bagging the first Oscar for a woman director since Kathryn Bigelow became the first in 2010 with ‘The Hurt Locker’.

Some see too much politics in these awards and feel this year’s Venice Jury led by the Korean director Bong Joon Ho, picked ‘Happening’ for the headlines it can generate – ie ‘French abortion drama tops the Venice film festival’ but let’s see if it goes onto make waves outside of Europe.

It was necessary to recognise the brilliance of Filipino director Erik Matti.

His epic feature ‘On the Job: The Missing 8’ is about an investigation into political corruption in the Philippines and some of the accompanying dishonest journalism that supported it. It is a great mixture of drama and comedy, social anger and fantasy. The extreme violence that we know from Matti’s compatriots Lav Diaz or Brilliante Mendoza is differently staged here with great humour and an excellent soundtrack.

But instead of securing the Golden Lion there was only a best male acting award – the Coppa Volpi – for John Arcilla.

In addition to this film, she was also seen with Antonio Banderas in the slightly confusingly titled, ‘Official Competition’ – a Spanish-Argentinian production about filming and acting and film festival competitions.

It didn’t pick up any awards but Cruz had warm words for director Pedro Almodovar and also dedicated her own award to all the mothers in the world, especially to her own and the mother of her husband actor Javier Bardem, whose mother passed away just a few months ago.

The award for the Best Screenplay went to Maggie Gyllenhaal for ‘The Lost Daughter’ and the Silver Lion for best director to Jane Campion for ‘The Power of the Dog’.

Both of these films are Netflix productions and Venice, unlike Cannes, welcomes Netflix – because in France, cinema owners insist these films get big screen releases.

But the Oscar buzz for both films among Anglo-American critics is already gathering apace.

Gyllenhaal’s directing debut adapted from the novel by Elena Ferrante is about Leda Caruso, performed by Olivia Colman (normally very charming but not so much in this film), a middle-aged languages professor on a holiday in Greece.

She is recalling her past life, marriage and failed motherhood. Her presence in a small Greek town disturbs the family of the local mafiosi, with whom she does not get along.

‘The Power of the Dog‘ is based on a novel of the same name by Thomas Savage and set in the 1920s in Montana, US.

We see two brothers: one is a real cowboy, and the other a sensitive gentleman; one is aggressive and does not much like women and the implication is that Benedict Cumberbatch’s character is awkward and hiding something.

Kiwi director Jane Campion is a masterful at the helm (her ‘The Piano’ remains one of the most powerful modern films of recent decades) and this is a fine film on its own terms, but doesn’t break out into something more meaningful and memorable. Nevertheless, it has appeal and a big screen release will help its Oscar credentials.

The Grand Prix award went to director Paolo Sorrentino for ‘È stata la Mano di Dio’ (‘The Hand of God’) and it is truly deserved.

Having lost his parents at the age of 12, the Italian maestro spent a long time preparing to tell this very personal story of his life.

He humorously mentions that the invitation to the World Cup match featuring Maradona (England’s infamous cry of disappointment and that hand of god goal) saved Sorrentino from death.

But the film is not about the tragic circumstances of his parents passing away because of a faulty heating system at their holiday hideaway, but the coming of age of a young man in very difficult and painful circumstances.

This sensual, nostalgic, ironic celebration of life tells us about the formation of the man that will become Paolo Sorrentino in his hometown of Naples in the 1980s.

The role of the young director is played by rookie Filippo Scotti, who received the Marcello Mastroianni Award for Best Young Actor.

A Special Jury Prize went to Michelangelo Frammartino for ‘Il Buco’ which some critics called a poetical essay, while others simply left the cinema or fell asleep, due to its documentary style and a lack of dialogue.

Away from these competition films, the main South Asian interest focused on the third film by Aditya Vikram Sengupta’s Once Upon a time in Calcutta – an ode to a city and culture that is either in retreat or constantly re-inventing itself… It screened in the Orizzonti (Horizons) strand but lost out to ‘Piligrimai’ (‘Pilgrims’) by Laurynas Bareiša from Lithuania.

For Pakistan, there was a short film, ‘Mulaqat‘ and a director who is unlikely to just disappear. Well, let’s hope not…Seemab Gul has an eye for a modern tale and explores old and new values in a society riven with contradictions and complexities. It featured in the short Horizons section and the winner was ‘Los Huesos’ (‘The Bones’) by Cristóbal León, Joaquín Cociña from Chile.

In previous years, Venice has picked films that went onto score Oscar success – ‘Nomadland’, ‘Roma’ and ‘The Shape of Water’.

All pictures: Courtesy of Venezia 78 and by Giogio Zucchiatti

Interview with writer-director Aditya Vikram Sengupta about ‘Once upon a time in Calcutta’ (video) – http://asianculturevulture.com/portfolios/venice-2021-once-upon-a-time-in-calcutta-writer-director-aditya-vikram-sengupta-i-wanted-to-explore-the-city-through-people-and-their-mindsets/

Interview with lead actor Sreelekha Mitra from ‘Once upon a time in Calcutta’ – http://asianculturevulture.com/portfolios/venice-2021-video-bengali-star-actor-sreelekha-mitra-sometimes-a-woman-can-manipulate-a-man-and-if-she-wants-it-to-be-physical-its-her-choice/

Interview with Seemab Gul whose short ‘Mulaqat’ (‘Sandstorm’) also had its world premiere at the festival – http://asianculturevulture.com/portfolios/venice-2021-director-seemab-guls-mulaqat-sandstorm-asks-powerful-questions-online-relatationshipsnd-shows-abundant-promise/