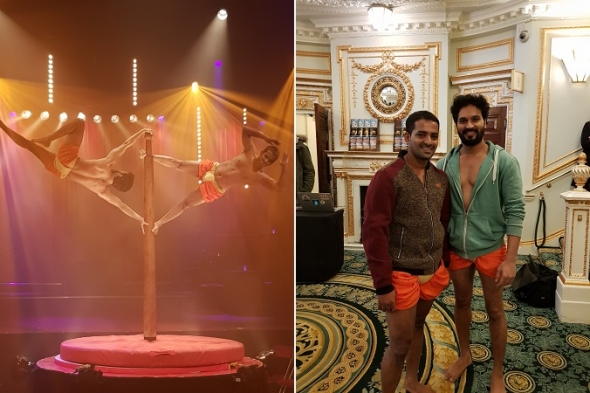 Many sports clubs in India offer it as part of a young man’s physical education, and now two are taking it to new heights…

FOR THE FIRST time ever one of India’s most popular sporting spectacles has come to a West End stage.

Rajesh Mudki and Rajesh Amrale are the performers of ‘Mallakhamb India!’ in the latest version of ‘La Soiree’, a well-established variety show made up of a mixture of cabaret, circus and unusual acts.

Introduced as the ‘boys from Mumbai or Bombay’ as both compere Betty Siemers (a man) and producer Brett Haylock refer to them, the two are making their formal debuts in the UK.

Essentially, Mallakhamb refers to the pole and provides the base from which all movement exercises are completed.

A mixture of gymnastics and choreography, it’s probably safe to say a West End stage (The Aldwych in this case) has never seen anything quite like it.

Performed to a background of different music (representing different periods and different regions), it’s six and half minutes long in ‘La Soiree’ and the audience thrilled to the pair’s dexterity and flamboyance on the evening www.asianculturvulture.com was there.

“It was an amazing experience,” Mudki revealed of their debut at the end of last month to www.asianculturevulture.com.

“The audience really appreciated it and we had people coming up to us and congratulating us. They loved it. It’s all thanks to Brett (Haylock). It’s really a dream for us.”

Mallakhamb is a popular pastime and run by lots of sports clubs in India.

Its regional heart is around Mumbai and the state of Maharashtra, though in more recent times, it’s spread to the rest of India.

“It started as part of wrestling and Indian martial arts and it’s become part of sport more recently,” explained Mudki.

While he credits its original growth to around 150 years ago and the holy city of Nasik in Maharashtra, there are references to Mallakhamb in much earlier times.

Mudki said that he and Amrale were both encouraged by their families to do a ‘traditional’ Indian sport and found themselves in the same sports club in Mumbai and joined forces.

They have been performing for a few years now and their reputation was enhanced when they won a prestigious national competition around five years ago.

“We used to compete against each other,” Mudki laughed. “We were in the same group and in the national level competitions.”

Amrale said: “I have been communicating with Brett for about five years on Facebook, hoping to come here to perform.”

In the video below, Haylock tells us how it all came about.

The two will be returning to India once ‘La Soirée’ hangs up its costumes and contraptions in February and the boys are set to go back to India before heading off to Australia to perform.

“The most important thing for us is to see Mallakhamb spread around the world. People should know what it is and get a taste for it. It’s a combination of strength, flexibility and concentration with core strength and speed required.”

Don’t believe him – or three hours of training every day – go and see it for yourself and enjoy what is a most unusual spectacle for a West End stage and sit back and be tickled by the other variety acts.

Read the review for more…

Have you seen #mallakhamb before? It's come to the UK as #theatre #cabaret #variety in #LaSoiree @TheAldwych
Did you see pix yesterday?
More soon…
See pic.twitter.com/9WsPcNWLDS