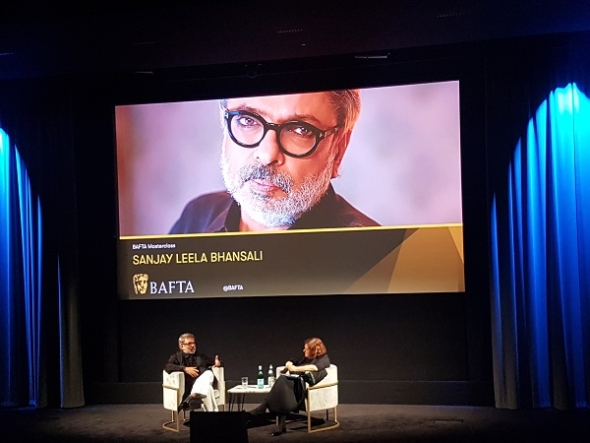 One of the most significant Indian directors of his generation, his latest film ‘Gangubai Kathiawadi’ is bidding for a BAFTA nomination…

THE BRITISH ACADEMY FILM AND TELEVISION ARTS (BAFTA), recently hosted a masterclass with the director, Sanjay Leela Bhansali which was moderated by Rachel Dwyer, Professor Emerita of Indian Cultures and Cinema, SOAS and author.

Although called a ‘masterclass’ this was something of a misnomer, as it was an in-depth Q&A session with a whistle-stop tour around Bhansali’s career and finding out what makes him tick.

Bhansali is a fascinating director, his films range from the independent art house cinema films such as ‘Khamoshi’, his (1996) his first feature, and ‘Black’ (2005), to the hugely colourful spectacles of ‘Hum Dil De Chuke Sanam’ (1999) to the latest, ‘Gangubai Kathiawadi’ – which premiered at the Berlinale earlier this year and was released in cinemas shortly afterwards globally.

His passion and commitment to his art really shone through the entire conversation, and as he put it: “For me film-making is like a prayer. I give complete surrender to what I am making,” he said at Bafta in Central London on Monday (November 27).

There is some speculation that Team Bhansali is on a mission to bring the awareness of ‘Gangubai Kathiawadi’ to the attention of the BAFTA members, so that it can be considered for nominations to the BAFTAs (February 19 2023) and the Oscars (March 12 2023).

The Q&A was interposed with excerpts from his films and the audience consisted largely of South Asian cinema enthusiasts as well as creatives. (It is hard to say how many BAFTA members were in attendance).

Bhansali revealed that his love of filmmaking was inspired when his father took him as a four year old to a film studio, leaving him there while he went about his business. The boy watched a cabaret scene being shot and felt “this was my world”. Growing up in a chawl (tenement building) in Bombay /Mumbai (he grew up in Bhuleshwar, a neighbourhood in South Mumbai) he said there was a film screen at the end of the lane and a projector would show films without sound. He was also watching them from the wrong side, and said he had seen the classic ‘Mughal-e-Azam’ (1960) fifteen times.

Dwyer did not quiz him much about his childhood or family, however as an adult Bhansali began working in film as an editor for Vidhu Vinod Chopra in ‘Parinda’ (1998) and ‘1942: A Love Story’ (1994) and directed ‘Khamoshi: The Musical’. The romantic drama featured a deaf-mute couple who has their hearing daughter take care of them. Tackling such difficult subjects which Indians like to keep hidden, did not result in box office success.

‘Black’, a story of a deaf and blind girl, played by Rani Mukherji and her teacher, reprised by Amitabh Bachchan, did fare better. He was even persuaded to do a “kiss scene” with Rani’s character.

Bhansali is a multi-hyphenated talented creative working as a director, producer, editor and music composer.

He is inspired by filmmakers like K Asif, Kamal Amrohi, V. Shantaram and driven by a desire to fulfil his late father producer, Navin Bhansali’s dreams to make larger than life spectacles. (Although this wasn’t directly discussed at BAFTA this seems to be the underlying narrative).
Bhansali talked about his father’s alcoholism and how it led to his death. In his black humour way, he talked about how his mother kept a half finished bottle of whisky in the cupboard and when Bhansali felt melancholy or missed his dad, she pointed him to the direction of the wardrobe and would say: “Your father is there!”

It was his 2002 film, ‘Devdas’ that propelled Bhansali into the global limelight. The film is based on a 1917 Bengali novel by Sarat Chandra Chattopadhyay, telling the romantic story of Devdas and his love for ‘Paro’, who were childhood playmates but because he is from a higher echelon of society, his family do not accept her as a possible match. This provokes his descent into alcoholism and drives him into the arms of a prostitute, Chandramukhi, who absolutely adores him.

The classic has been made twice before in Indian cinema with a 1955 version starring Dilip Kumar – considered to be a definitive rendition of the character, making it a hard act to follow.

As Bhansali told his audience at BAFTA he had wanted to explore the “purity of love” and felt that only the Bollywood star, Shah Rukh Khan, was able to realise the main role, as he is a “wickedly charming man with lonely eyes”. Paro was played by Aishwarya Rai Bachchan.

He also revealed how Madhuri Dixit who was Chandramukhi made him wait for over two and half years outside her vanity van, before she condescended to see and talk to him.

The film was shown at the Cannes Film Festival, where it received a standing ovation with yours truly in the audience and the film was nominated for a BAFTA in 2003 for Best Film Not in the English Language (Bhansali shared the nomination with with producer, Bharat Shah). It was celebrated at the Cannes Film Festival in 2017, on its fifteenth anniversary by sponsors L’Oreal. (See below for our Aishwarya Rai Bachchan interview and Devdas screening video).

He followed this with films that challenged audience expectations.

In ‘Saawariya’ (2007), inspired by Fyodor Dostoevsky’s short story, ‘White Nights’, he launched the careers of Neetu Singh and Rishi Kapoor’s son, Ranbir Kapoor and featured him in the nearly altogether, his modesty hidden only behind a white towel – and Bollywood star Anil Kapoor’s daughter, Sonam Kapoor.

In ‘Guzarish’ (2010) he turned heartthrob Hrithik Roshan (whom he described as “a Greek God”), into a paraplegic who petitions the court to end his own life.

In 2008, Bhansali was invited to direct an opera, ‘Padmâvâti’ at the Théâtre du Châtelet, Paris. This is a 20th century opera-ballet by Albert Roussel and originally and later went to Spoleto Festival Italy. (See link below for more on the Bhansali opera).

Described as an “Orientalist” opera this is the story of a 13th century titular Queen who has to fight Mughal emperor, Alauddin, when he becomes besotted with her and asks her husband to hand her over in order to prevent war.

I travelled to see this opera in Paris which was a visual treat and I marvelled at the use of live animals on the stage.

It could be argued that this gave him the impetus to later make ‘Padmaavat’ (2018) starrer featuring Ranveer Singh and Deepika Padukone.

This showbiz couple has worked in Bhansali’s lavish epics, ‘Bajirao Mastani’ (2015) a period drama, and his lusty Gujarati folk adaptation of ‘Romeo and Juliet’ with ‘Goliyon Ki Raasleela Ram-Leela’ (2013).

Bhansali is a dedicated and tenacious filmmaker in pursuit of his art and he explained that he is always trying to portray the different rasas (aesthetics) in his films.

His favourite are shringara (romantic love) and veer (heroism). His latest film, ‘Gangubhai Kathiawadi’ is a women who stood up for herself in a man’s world. “Most of my characters are lonely but they fight for hope and goodness.”

Privacy & Cookies: This site uses cookies. By continuing to use this website, you agree to their use.
To find out more, including how to control cookies, see here: Cookie Policy
← ‘Bollywood Jack’ – Putting the Chilli into Panto and Jack tells us he wants to work with SRK…
‘Shambala Junction’ – Dipika Mukherjee’s stirring tale of ‘baby sales’ wins Virginia Prize →