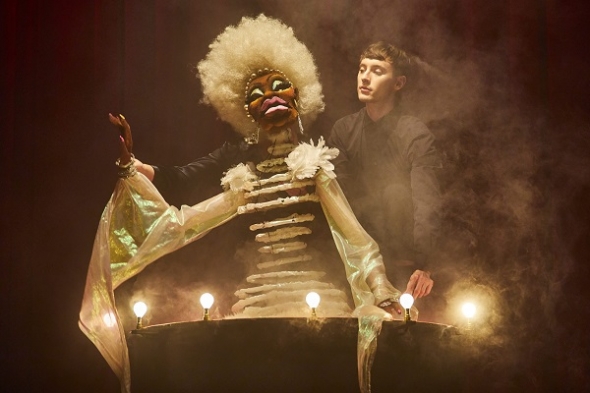 USE YOUR eyes and not your phone, says the MC as this circus, burlesque, variety, and cabaret show is about to unfold. And a sign warns the audience that the show contains “haze, nudity and expletives” and is a form of live entertainment you might not have experienced in a stage environment.

First up are Cabaret Decadence, a duo with a skeleton puppet that resembles a black soul ‘diva’ in the mould of a Diana Ross or Shirley Bassey dressed in hoops, miming the very popular song ‘If you could read my mind love’.

Daredevil Chicken and their ‘Bananas’

This is followed by two Bombay Boys with a piece called ‘Mallakhamb India!’ that can be best described as ‘Pole Dancing with a difference’ – they use their supple and lithe bodies to perform some yoga poses and gymnastic moves onto a vertical pole all the while moving to the music of maestro AR Rahman and from the global blockbuster ‘Bahubali’ film. They have grace and daring in equal measure.

After them, appear Daredevil Chickens from Las Vegas with a number, ‘Bananas’ where they masticate the fruit and regurgitate them – throwing out bits – a date night with a difference if you dare.

In the second act they do the magic of dressing and undressing in a piece called ‘Striptease’.

We are then confronted by a blonde woman in a leotard with a half-naked man doing what can only be termed as ‘sexy acrobatics’ (Leon and Klodi).

Amy G, a legend in the international cabaret scene arrives in rollerskates doing flamenco and enlists the help of the ‘Posh audience’ – people who’ve paid a lot of money to sit on stage and get up close and personal with the show. She is basically humouring Spanish machismo and her conversation is a bit irritating – but she has an amazing singing voice and can belt out those numbers.

She comes back at the beginning of act two singing, ‘Mad About the Boy’, and goes around to audience members asking them, “May I touch you?” and if the answer is affirmative, then she does and some…(not for the granny who thinks Strictly is rather too racy with those dresses and tight trousers…).

Michelle Clarke, the Hula Hoop artist performs her act to the classical sounds of the Russian composer, Modest Mussorgsky. The music is really dynamic and motivational, allowing the artist the creative freedom of expressing herself to the fullest.

We are treated with LJ Marles, the aerial artist followed by Maxime and Nathan aka, The Chilly Brothers – a circus duo who do some defying acrobatics on a high wire.

The second act also features some of the same artists, but special mention must go to the act, ‘La Serviette’, (where two guys, Leon Fagbemi and LJ Marles do a comic number with a towel, well two…but a small one), you get the idea…

Cabaret artist Fancy Chance (Veronica Thompson) gives us ‘Hairhang’ and what a sight is it to behold as she pirouettes high!!

It’s an evening that is a bit funfair, a bit burlesque and the acts are a mixture of endurance feats and bawdy humour and suggestiveness…

Try it for a daring night out that’s different enough from panto and memorable for not being like anything you’re likely to see on the West End stage any time soon…!

ACV rating: **** (out of five)
See main story for video and story about Mallakhamb!

Pictures courtesy of La Soirée and photographs by Brinkhoff-Moegenburg

Listing
Recommended age 17 and above…
See ‘Mallakhamb India!’ and Rajesh Mudki and Rajesh Rao as part of ‘La soirée’ until February 3 (2018) at The Aldwych Theatre, 49 Aldwych, London WC2B 4DF
Monday-Friday, 8pm.
Saturdays at 6pm and 9pm. Show is approximately two hours with an interval.
La Petite Soiree, a family friendly version runs from Saturdays at 3pm and is just 1 hour long. There are extra performances over the Xmas Holiday break. Check
http://www.la-soiree.com/
http://www.nederlander.co.uk/aldwych-theatre
http://www.nederlander.co.uk
Box office: 0845 200 7981