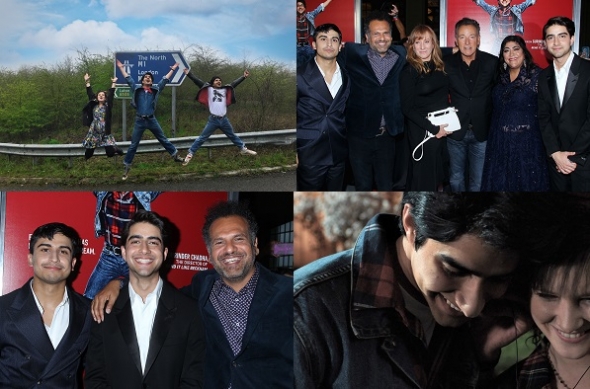 She’s only gone and done it again, as acv speaks to Chadha, Manzoor and Kalra, about fathers and sons, uncovering acting talent and how the film connects to disparate communities and is about dreams and dreaming…

Director Gurinder Chadha believes that herself and she’s right of course. (She told us this in our interview at Sundance Film Festival in the US earlier this year).

This isn’t to decry ‘Bend it like Beckham’ (‘BILB‘) in any way – it said something about female ambition.

It struck a chord globally and hit a seam of thought everywhere with girls, who had dreams but knew the world around them wouldn’t accept them or their plans.

The film pushed a door for them, everywhere. Gurinder Chadha got them – almost like no other filmmaker had previously or in that way.

In a similar frame, ‘Blinded by the Light’ has that same motor at the heart of it – wanting to do something but the world shrugging its shoulders and saying, ‘nah, mate, move on, that’s not for you’.

But in ‘Blinded by the Light‘ the main protagonist defies those very odds – and using the music of US rock legend Bruce Springsteen smashes those doors down that say – Stop – to his own dreams.

Inspired by a true story and adapted loosely from British journalist Sarfraz Manzoor’s memoir ‘Greetings from Bury Park’, it’s about his journey from Luton to Media Land, and writing, via the music of the man known as, The Boss.

Chadha put it very simply to us at www.asianculturevulture.com’s first and only one-to-one interview at the Sundance Film Festival in January this year: “My job was to take Sarfraz’s words and life and Bruce’s words and legacy and give honour to both – that was really the challenge.”

Chadha and Manzoor knew each other before Manzoor had penned his book, published in 2007 and the journalist revealed at a round table press meet in London earlier this month, that he had thought about a film and Chadha making it as he was writing his memoir.

However, Manzoor wasn’t a screenplay writer and Chadha said it needed work to become a fully shaped story that could support a film.

She told him as Manzoor paraphrased: “This could be something but what is the story?”

She also said then that it was important they got Springsteen’s backing – without the music there would be no film.

The story about that is quite well-known now (Chadha described it at Sundance post the screening from 6mins in).

Manzoor is something of a super fan and has seen Springsteen some 150 times – The Boss recognised Manzoor (as the only brown Afro sporting individual at concert after concert) on the edges of red carpet film event in London and went over to congratulate him on his book. Chadha had to jump in as Manzoor hyper-ventilated. A dialogue began and Springsteen liked the script enough to grant permission to use his music for the film.

But still there was the problem getting a film out of Manzoor’s memoir. Then he saw ‘An Education’ starring Carey Mulligan and adapted from famous journalist Lynn Barber’s own memoir of the same title.

“It’s her life being transformed by a charismatic outsider between 16-18 – that’s the core of it,” recounted Manzoor, saying it unlocked the door to his own story on celluloid.

Chadha and husband Paul Mayeda Berges took Manzoor’s effort and with further inputs from him turned it into a film.

Chadha told us in Sundance: “I had to push him (Manzoor) to make it moving – he didn’t want to go there, it was hard.

“We had to mine this story and take all these details about his mother and father and change them into characters. He wanted to protect them naturally and put distance between him and them for the film.”

That’s what they mean when they say the film is inspired by true events – the story is Javed’s, not Manzoor’s totally – there wasn’t a feisty, politically conscious young woman like Eliza (Nell Williams) around. She’s Javed’s love interest and that part of the story is very well done.

Manzoor told us at the round table meet it was hard to say how his father would have reacted to his film’s portrayal.

“He died when I was 23. I don’t know what he would make of it, it’s a hard question. He lived and died in complete anonymity.”

But now thanks to this film everyone knows what happened to Saf’s dad and it’s no bad thing.

At that time he would write poems and one features in the film – and it is about how he feels about his father. In real life, his dad found one of his many poems.

“It was the most excruciating point in my life – he said: ‘Do you think I am not intelligent enough to understand what you’re writing?’ – I didn’t know what to say that,” said Manzoor, poignantly.

Kalra as Javed is really quite superb. It’s his first leading big screen role (he featured in ITV’s ‘Next of Kin’ ) and he is still at drama school, learning his craft.

Chadha has this knack of discovering talent – she after all found Keira Knightley and Pariminder Nagra in ‘BILB‘ and at the roundtable in London she gave us an insight into her casting considerations.

“When I cast I am always looking for something particular in them, some instinct – a complete lack of an ego, if I see an ego I can’t really work with them.”

It has to be said she gets wonderful performances even from her lesser (screen-time) characters – Meera Ganatra as Javed’s mother is quietly compelling and draws huge empathy, as does Javed’s sister Shazia, played by Nikita Mehta.

Kalra has a big set piece near the end and it’s hugely impressive and in some ways goes to the very heart of the film’s appeal and why so many who have already seen it, find it powerful.

“What is most important is people connecting to something in it,” revealed Kalra at the round table. “This is the most exciting thing – this film about a little brown kid is now translating to other people.”

Manzoor has spoken of his surprise of white folks in remote parts of America connecting with Javed’s story and for Kalra his final speech, in the film, says something about where we’ve come from (as a community) and encapsulates something about aspiration.

“I think it was difficult to talk about race then (in the 1970s of the film), and I didn’t think it was as much of a thing back then: when you are getting the crap beaten out of you, you don’t really have time to stop and talk about race and to be that character (Javed) in that situation where your circumstances are so tough and you haven’t been broken (by it all) and you are aware of his circumstances, then you know where that speech is coming from.”

It’s about dreams, cherishing and respecting them and believing in them when much, if not everything, might be against you.

It is a fitting way to end the film and an appropriate way to conclude this piece on what will become, in time, another totemic Gurinder Chadha film.

We can think of no higher praise than say, go see it!

Pictures: Courtesy of Blinded by the Light (except where stated)

Our original review (from Sundance)

‘Blinded by the light’ – UK preview screening brings house down…