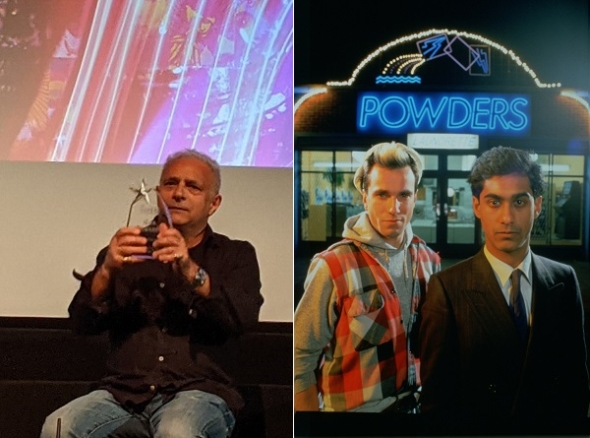 FUNNY, insightful and ever so slightly provocative – Hanif Kureishi’s talk at the BFI Southbank in London last night (June 18) as part of the London Indian Film Festival (June 17-July 4), was just a little like the film that proved to be his big breakthrough.

Speaking before the screening of his seminal ‘My Beautiful Laundrette’ (1985), one of Britain’s most successful writers, shared just what a difference the film’s success made to his life – and his writing.

“I had money and meant I could write what I wanted…”

It was in 1990 that ‘The Buddha of Suburbia’ was published and it still remains one of the most admired and popular novels of recent years.

Talking to Rich Cline, chair of the UK Film Critics’ Circle, Kureishi told the audience he had found his ‘voice’ in writing ‘My Beautiful Laundrette’ and arguably it set him on the path to success and making a living from writing – “just” – Kureishi emphasised.

He told the packed (with social distancing in operation) NFT1 that he felt a bit jaded after writing for the theatre where he was based at the Royal Court in London, and it was on his first trip to Pakistan that he began to write the script for ‘My Beautiful Laundrette’. He said he was very bored in Karachi and started to think about the characters and their story.

The film charts the early adult life of Omar (Gordon Warnecke) and Johnny (Daniel Day-Lewis) who meet in South London and join together to run a laundrette.

The former skinhead Johnny who used to indulge in P**i-bashing jaunts around South London falls in love with Omar and the film charts the life and times of both young men living in South London in the 1980s.

The film features a sexy kiss between the two young men – something that was hugely taboo at that time.

Kureishi told the audience that he visited an early screening and there were protests by some Muslims who threatened to burn down the cinema and vehemently denied homosexuality even existed.

Kureishi knew that to be blatantly false. “I’d just been to Pakistan,” he half-joked.

He said he was fond of putting characters such as Omar and Johnny together and have them “collide”.

He confessed to the audience that he initially wanted to cast Gary Oldman in the role that catapulted Daniel Day-Lewis into the front ranks of British actors – he had a few roles before but was certainly not a name at that time, Kureishi reflected.

“He used to come round my flat and watch all these old movies,” Kureishi said of their friendship at that time.

He revealed that wherever they went people were always coming up to him (Kureishi) and slipping notes of paper with their numbers on them.

“’Give this to Dan’, they would say…It was so annoying,” he laughed.

Kureishi stated that Day-Lewis’ sex appeal was a significant part of the story – and that the relationship with Omar had to embody that.

He also wanted to create a joyous gay love story on film. “They’re all so miserable,” he teased.

The change in his life was none more so perceptible than when he went to America for the Oscars. He was nominated for one as the screenwriter of ‘My Beautiful Laundrette’.

“I was living in a council flat and when I went to New York I got picked up in a limousine and then going to the Oscars, it was fantastic and a once in a life time sort of experience (as a debut writer).”

Asked what was the best advice he had received – he told the audience that it was “Write about race” – he explained that he had encountered much racism growing up and he could write about the subject with depth and of course personal experience, whereas few other writers, especially those from the literary establishment could do the same.

It was also how he found his voice, and purpose as a writer, he suggested.

Intriguingly, he said both his adult sons are writers and they work on soaps.

“I got offered Doctor Who, it was good money – but it wasn’t for me.

“They work in the system,” he reflected, counterpoising the way he developed as a writer on the street, almost quite literally.

*The London Indian Film Festival continues – Asif Kapadia is at the BFI Southbank today (June 19) as it screens ‘The Warrior’ – his debut feature which won a Bafta.

For more on the above and LIFF 2021 http://www.londonindianfilmfestival.co.uk