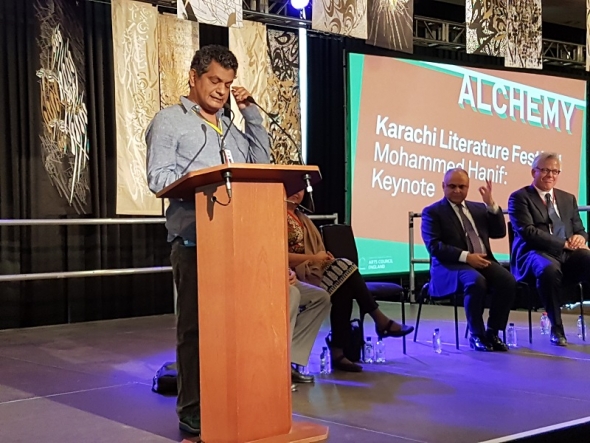 It is the country’s largest city and it has a thriving arts scene but you wouldn’t know that if you simply watched the news in Britain..

KLF is a young festival that began in 2010 and is organised by the Oxford University Press Pakistan and its founder directors, are Ameena Saiyid (head of OUP Pakistan) and Dr Asif Farrukhi (writer and editor).

The founders explained that there is a thriving literary scene in Pakistan and the reason for the festival was to “bring back books into the hands of younger generation”, and how perceptions of Pakistan in general and Karachi in particular, “need to be talked about in quite different terms other than the nexus of violence, drugs and international terrorism”.

Saiyid also revealed that this year OUP Pakistan would be publishing 70 books to mark 70 years of the independence of the country. Apart from the founders, the opening panel of guests included: Adrian Mellor, managing director of Asia Education Division, OUP; and His Excellency, Syed Ibne Abbas High Commissioner of Pakistan.

The day on May 20 began with a keynote address by the writer, Mohammed Hanif (pictured above) offering insights into Pakistan’s history, hopes and dilemmas.

As with his writing, Hanif adopted an irreverent and satirical approach poking fun at the pomposity of how men like to give “Keynotes”, alongside a story about his late mother being asked to throw herself into the well, if freedom meant dishonour in any way.

“Give a man a podium and he will tell you what he thinks of the world even if he has no idea what he’s talking about,” he joked.

In between all this he found time to lampoon the government over the state of affairs at home.

“In 2016, according to Human Rights Commission of Pakistan 728 people were disappeared, that’s the highest number in past six years, but reporting or talking about the disappeared involves real risk – you too can become a missing person,” he said, before giving an example of a person who has been missing for 16 years. He then related this to the story of his late mother and missing people at Partition.

Hanif, the storyteller that he is, interwove his speech with many personal and wider experiences about living in the UK, exploring multiculturalism at his son’s school by teaching the children there to make ‘parathas’, working for the BBC, bathing white people’s dogs, and having his own dog and following the life of Princess Diana.

However, he ended his address on a serious note by talking about Malala Yousafzai; “It’s a tragic state of affairs that the public face of her attackers is being rehabilitated in Pakistan…but we still haven’t managed to create an environment where Malala and many others like her can walk the streets without someone trying to push them into a well or shooting them in the face.”

After such food for thought, the audiences were spoilt for choice from four simultaneous events happening at every session, so overall there were about twenty events throughout the day.

The KLF programme dealt with a lot of different subjects ranging from legislation to making transgender people and women safer, to characters and fiction inspired by exile and displacement and a renaissance of Pakistani arts and cinema, where www.asianculturevulture.com especially enjoyed listening to actor, Atiqa Odho and designer, Maheen Khan. Other panellists were filmmaker, Faris Kermani and journalist, Cyril Almeida.

There was a talk about the education system in Pakistan around the private and public education; conflict around Urdu versus the English language and regional languages, about social media Karachi, and a conversation between artists, inlcuding Nimra Bucha and Rehan Sheikh (where it would have been helpful to see excerpts of their work).

Baroness Warsi was interviewed by Suniya Qureshi about her book, ‘The Enemy Within’ and her life in politics. The former cabinet minister is no longer in front line public life, after serving as minister without portfolio initially and then as a minister at the foreign office in the former David Cameron administration between 2010-2014.

However, as with all these types of conversation sessions, they are only as good as the chair or facilitator. Some sessions assumed context and if you didn’t know that then it was difficult to engage in any meaningful manner.

An inspiring session was Partition Stories, chaired by Urvashi Butalia (author of the seminal work on partition, ‘The Other Side of Silence: Voices from the Partition of India’, 1998), and featured a panel including Nimra Bucha (reading some Manto stories), Vayu Naidu, Professors, Sarah Ansari (History, Royal Holloway) and Kamran Asdar Ali (Department of Anthropology, University of Texas) and musician, Amrit Kaur Lohia.

The session was about reconciliation and breaking a culture of silence which still left people feeling victimised – notably women who were either kidnapped and ended up on the ‘other side’ creating new families. Overall, the KLF was a success and the event was rounded off with music by the Pashtun folk-rock band, Khumariyaan presented by Funoon London.

JLF moved this year to the British Library in King’s Cross, London but over the same weekend, May 20-21, leaving some to decide where the allegiances lay.

Privacy & Cookies: This site uses cookies. By continuing to use this website, you agree to their use.
To find out more, including how to control cookies, see here: Cookie Policy
← Bird Eye Review Show Series 2 episode 4 – Madhuri Dixit Nene in Netflix’s ‘The Fame Game’
‘Life Between Islands Caribbean-British Art 1950s – Now’ – Uplifiting, inspiring, heart-rending and deeply moving… (art review) →