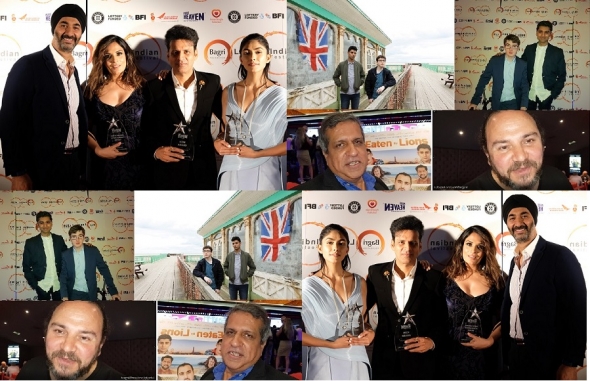 The award and other actor gongs (see below) brought the nine-day and ninth London Indian Film festival to a close.

‘Eaten by Lions’ was something of a highlight for acv – the only British film in the 2018 line-up it deserved to win big and hopefully it will now secure distribution and go on to be a hit.

Jason Wingard, writer and director of ‘Eaten By Lions’

Writer-director Jason Wingard reacted: “We’re delighted to win this fantastic award. ‘Eaten By Lions’ is a modern relevant comedy dealing with contemporary issues such as diversity and disability, but ultimately captures that life is about relationships and people, and we’re so pleased audiences are connecting with it. It was fantastic to work with some of Britain’s best loved comedians, who all bought emotional heart and humour to the story.”

Elsewhere for us, interviewing Bangladesh director Mostofa Sarwar Farooki and seeing the widely-acclaimed and much garlanded, ‘What will people say’ (‘Hva vil folk si’) proved to be another two very high points.

ACV contributors Tasha Mathur and Momtaz Begum-Hossain were the Q&A moderators for the films, ‘Village Rockstars’ (one of our recommendations) and ‘Eaten by Lions’, respectively.

On the eve of the festival opening, star Richa Chadha, and a recipient of the LIFF Sunmark Ltd Pure Heaven Icon Award, spoke to us live about her hopes and thoughts about the film ‘Love Sonia’ in which she stars and which opened the festival.

Chadha said that her Icon Award would help to promote films like ‘Love Sonia’ which were to hard to hear about in the cacophony that is Bollywood in India.

“Festivals like LIFF help us in making the right noise back home, so these films stand a chance against the mainstream expensive spectacle films,” (often described as Bollywood), Chadha explained.

Her film is a hard-hitting feature about human trafficking set in Mumbai and also features Freida Pinto as you have never likely to have seen her before – as a rather surly prostitute (something LIFF director Cary Rajinder Sawhney alerted to us when we spoke to him for our preview to the festival).

Back now though to ‘Eaten by Lions’. It enjoyed two screenings – including a sold-out Cineworld Leicester Square screening and another one at Stratford Picturehouse on Monday (25).

The film became the first british production to win the top award – the festival aims to showcase the best of South Asian cinema, both from home and abroad.

Writer-director Jason Wingard who spoke to us at the Cinewold screening, said he was delighted it was connecting with audiences.

Our coverage (see above loink) includes a live Twitter interview with the star of it, Antonio Aakeel. (Just the Aakeel interview here)

Irrfan Khan took one of the acting gongs. He received the award privately as he undergoes treatment for a tumour in London. He is understood to be responding well to treatment.

Two of his films featured in the festival – ‘Doob: No bed of roses’ (link above) and in Anup Singh’s ‘The Song of Scorpions</em>’ .

Manoj Bajpayee was another awardee. He appeared in ‘Love Sonia’ and ‘Gali Guliyan’ (‘In the Shadows’).

He said he was delighted to have received the award in London, his favourite city and felt the films screened at the festival showed that independent sub-continental cinema did “complete justice to the medium of cinema, where creativity is at its peak”.

Newcomer Mrunal Thakur who is the undoubted star of ‘Love Sonia’ won an Icon award too.

She can look forward to a glittering future. She is soon to appear alongside Bollywood heartthrob and icon, Hrithik Roshan in ‘Super 30’ a biopic about a mathematician who helps underprivileged students get into some of India’s top educational establishments.

Thakur said she was on cloud nine to have got the award and was encouraged that ‘Love Sonia’ had touched so many.

“I always wanted to do a film that would touch the audience and ‘Love Sonia’ it is!”.

Sunny Ahuja of Sunmark Ltd, sponsors of the Icon awards, commended the team behind the festival and greatly looked forward to its tenth anniversary next year.

Sawhney, LIFF director, said it had been a successful year despite the very real challenges of getting people into the cinema during a heatwave and the football world cup.

The festival continues its Birmingham and Manchester editions until today (July 1).

*Material about the closing film, ‘Venus’ to come