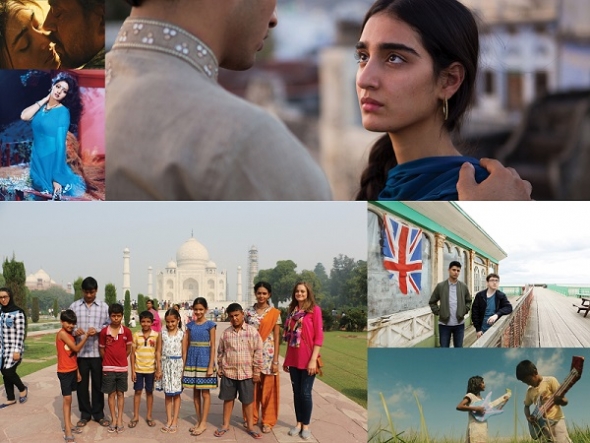 Known better as LIFF, and sponsored by the Bagri Foundation, it starts on Thursday (June 21) and we chose seven films ( in the end, was meant to be five…)

IF YOU are a fan of Freida Pinto there’s a chance to see a film of hers that will enjoy a world premiere at the Bagri London Indian Film Festival on Thursday (June 21).

It is the opening film of the London Indian Film Festival (LIFF) this year and has an impressive Hollywood and Indian indie cinema cast line-up.

The festival is split into different strands – The Female Eye; Fathers and Sons; Extra-ordinary Lives; Hard-hitting films about famine and toilets; and Mystical India.

The festival closes on June 29 with a transgender comedy from Canada, called ‘Venus’ at the BFI Southbank.

We have interviews with Cary Rajinder Sawhney (see link shortly), founder and director of the festival and Khireet Khurana, the director of the Central Gala film, ‘T for Taj Mahal’.

As there are some 20 plus films, we’ve picked out five films we think really stand out and specially deserve your attention and your money!

The festival now in its ninth year also has editions in Birmingham (June 21-29) and a new cinema in Manchester, screening films over Saturday June 29 and June 30.

Eaten By Lions
AM ALL-STAR UK cast including Johnny Vegas, Asim Chaudhry (Chabuddy G from ‘People just do nothing’) Nitin Ganatra, and Antonio Aakeel appear in this comedy drama about a couple of half-brothers who find themselves intertwined by fate and go in search of an Asian dad. They find themselves in the riviera of the north, Blackpool – with some hilarious consequences.
A Q&A with director Jason Wingard and others follows the screening. It’s an English premiere (it also features at Edinburgh Film Festival June 20-July 1 with the Eaten by Lions screening there on Thursday, June 21). It premieres down south at LIFF at Picturehouse, Stratford on Monday, June 25 at 6.45pm. Two other screenings are on Wednesday, June 27 at Cineworld Leicester Square at 8pm and at Home in Manchester, Saturday, June 30 at 4pm.

What will people say (Hva vil folk si)
PREMIERING at the Toronto International Film Festival last year, Iram Haq’s tale of love across ethnic and religious lines in Norway (where there is a sizeable Pakistani community) has been garnering wide acclaim, and not to say a few awards along the way too. Nisha’s (debutant Maria Mozhdah) outwardly happy existence is shattered when her rather traditional Pakistani father (Adil Hussain) discovers she has a native Norwegian boyfriend. Not happy, he sends her to Pakistan to be ‘educated’. There will be a Q&A with Haq. It screens at the Barbican on Tuesday, June 26 at 8.30pm, and again at Picturehouse Central on Wednesday June 27 at 6.30pm.

Village Rockstars
A MASSIVE international film festival award winner and recently championed by India’s Ministry of Information and Broadcasting at the Cannes Film Festival, ‘Village Rockstars’ is about one young girl’s innocent dreams of playing a guitar.
Set in rural Assam, not everyone approves of the young girl’s ambition and her mother finds herself caught between stiff traditions and modern ideas about what young women should aspire to achieve. There’s a Q&A with director Rima Das at Stratford Picture House, Tuesday, June 26, at 6.30pm (With British Sign Language Interpretation too) and the film screens again at the BFI Southbank on Wednesday, June 27 at 6.20pm and and at Home in Manchester on Sunday, July 1 at 4pm.

T for Taj Mahal
DIRECTOR Khireet Khurana’s first feature film reads almost like a true story. And one can’t help think it should be…an illiterate villager runs a popular roadside restaurant which is on the route of tourists travelling to the Taj Mahal.
Concerned that many young in the village are not studying and learning to read and write in a bid to escape poverty, the restauranteur gives his diners the option of paying the bill or teaching the youngsters. The scheme proves a big hit but then a big company sees further potential – but without our original social entrepreneur! It’s backed by Sony India and Khurana will be at the festival for post-screening Q&As at Cineworld Leicester Square on Saturday, June 23 at 6pm and at Watermans Arts Centre (Brentford) on Sunday, June 24 at 6.30pm.

Tribute event to Sridevi and screening of Mr India
Finally, this is not a new release and is a tribute event to the late Sridevi.
The woman who enchanted a billion hearts in Bollywood died earlier this year quite unexpectedly and will be the subject of tribute from Akademi dance director Mira Kaushik, followed by a screening of one of the most iconic Bollywood films of the 1980s.
Shekhar Kapoor’s Mr India has a welcome one-off big screen showing at Genesis Cinema (Mile End) on Saturday, June 23 at 4pm.

*Okay, five and halfish… Anup Singh’s ‘The Song of Scorpions’ which premiered at London Film Festival last October, returns to the big screen. Irrfan Khan stars alongside Iranian siren Golshifteh Farahani in this intense romantic potboiler. Singh, who returns to the festival after ‘Qissa’ will be at post screening Q&A at Picturehouse Central on Saturday, June 23 at 6.30pm and Crouchend Picturehouse on Sunday, June 24 at 3pm.
Khan, who is receiving treatment for a tumour in London, also has another film of his in the festival. He can also be seen in ‘Doob’ (‘No bed of roses’) which is a Bangladeshi/Indian production. Director Mostofa Farooki will attend. It screens at Genesis on Sunday, June 24 at 6.30pm.

This and the film ‘Teen Aur Adha’ (‘Three and a half’) are elaborated on in our interview with Sawhney and this sounds intriguing to say the least! Director Dar Gai comes to LIFF for post screening discussions. The film screens at the BFI Southbank on Sunday, June 24 at 8pm and then the next day at Genesis Cinema at 8.45pm.

Previously
Coverage of the London Indian Film Festival since 2014

Privacy & Cookies: This site uses cookies. By continuing to use this website, you agree to their use.
To find out more, including how to control cookies, see here: Cookie Policy
← Sir Sean Connery – 007 author Ajay Chowdhury remembers legend, dancing with his wife and says on-screen Britishness and masculinity had global and generational appeal
‘Mogul Mowgli’ – Deep connection and urgency of Riz Ahmed, co-writer and director Bassam Tariq on collaborating with star and Anjana Vasan and Nabhaan Rizwan on roles… →