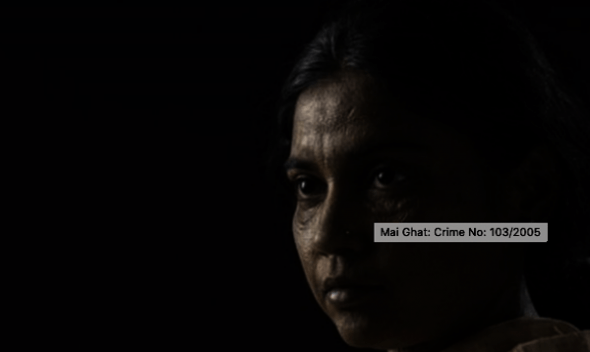 You can’t help but feel the ‘Mai Ghat – Crime No.103/2005’ has echoes of the fight Doreen Lawrence waged against the authorities in the pursuit of justice for her murdered son, Stephen – to put this in a wholly British context.

Let’s first of all say though, the circumstances are very, very different.

In this film and real life occurrence, the mother loses her son to a brutal and cruel campaign of harassment and torture by two policeman against her innocent son.

Like Stephen, he has not committed any crime and he was simply going about his business, when a policeman first decides to steal money from him.

Yes, you read that correctly – a policeman decides he can take money from a young metal scrap worker who comes from the other side of the social tracks.

Riding his bike and perhaps a little carelessly, carrying his friend on it as a passenger, the young man almost collides with the policeman in question.

An argument ensues, the scrap metal dealer is polite and apologetic and respectful.

However, the fact that he is carrying ₹4,200 (about £45) makes the policeman suspicious – in fact the money is his mother’s and saved up to buy some new clothes. She is a dobiwallah and ironically washes police uniforms.

The policeman has absolutely no qualms stealing the money and threatens the boy and his friend if they protest.

Irritated by the boys’ soft challenges, both are picked up later and tortured – one far more than the other – as a lesson not to question police authority.

Sadly, the actual boy whose money has been stolen dies at the hands’ of the policemen – the cop and his boss both indulge in the horrific violence – which is only alluded to in the film.

A wall of silence quickly comes around what happened at the police station and the other boy has to flee for fear that he will go the same way as his friend. The policemen simply make out that the boys were never arrested or picked up – the body is just dumped by a river. And the police say it isn’t known how he suffered some 40-plus bruises.

And so begins Mai’s battle.

She knows her son has done nothing wrong and begins the campaign to get justice.

She is poor and voiceless, but finds allies in a decent woman lawyer and a politician who fights for those who are not high caste.

He helps to bring in India’s national crime fighting agency, the Central Bureau of Investigation (CBI). It is a crucial breakthrough as the CBI (can) look at the facts on the ground and are, at least in theory, immune to local connections and considerations – they feel a case has to be answered.

Mai faces huge challenges and the policemen try their damnedest to get the case stopped or thrown out.

The eventual outcome is already widely known – the two policemen were convicted of murder last year and face the death sentence now.

It is thought to be the first time in India’s history that any policeman has been convicted for such a crime.

Directed by Ananth Narayan Mahedevan, an actor and director already of some distinction and made in the native language of Mumbai and its state, Maharashtra – Marathi, this is a quiet and very understated film.

What comes through is Mai’s determination and dogged persistence to clear her son’s name and put the policemen to justice.

It is an inspiring story and beautifully rendered by Mahedevan, who gets great performances from the lead cast and the policeman at the centre of it all, is also very credible and human – Mahedevan makes a point of showing the man with his family, tender and compassionate, and caring, but when he sees someone like the scrap metal dealer he does not see another human being…

He sees a young, poor, voiceless and a lesser soul, he can exploit and brutalise because he believes he is more useful to society – and that the young man is little better than a wild animal. Sadly, this kind of wretched thinking persists in some places and among a few communities.

While some directors would have gone for the whole fist thumping calls for justice and ocean of tears to illustrate this mother’s pain, Mahadevan instead focuses on Mai and her own quiet dignity and focus. She never raises her voice.

At 104 minutes, it has a simplicity and sublime beauty – some might find it a little slow and self-conscious (in places), but it ends very powerfully with the real Mai talking about her story… it deserves to be seen very widely and the award reflects its triumph as a creative and artistic endeavour.
ACV rating: ***3/4 (out of five)