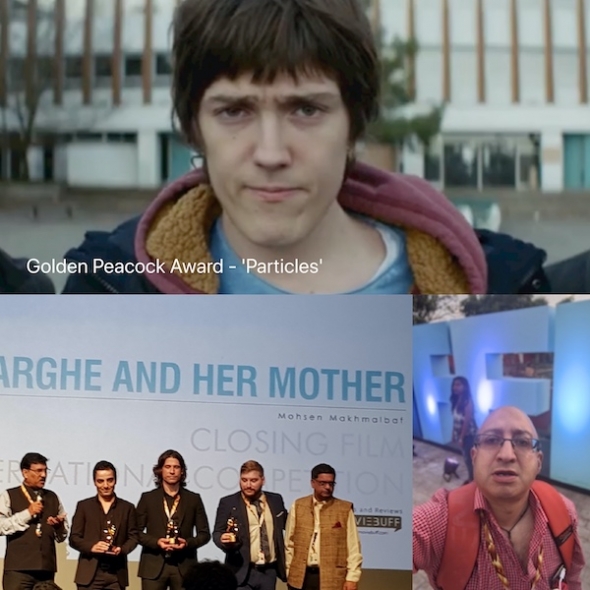 The curtain came down on India’s biggest film festival, celebrating its 50th edition – acv has been here November 20-28…

ANOTHER three-hour show and the final closing film of ‘Marghe and her mother’ brought the curtain down on the International Film Festival of India (IFFI) in its 50th edition – with a French-Swiss film, ‘Particles’ winning the Golden Peacock – the top prize in Goa yesterday (November 28).

First time director Blaise Harrison was not in Goa to receive his IFFI memento and cash prize of ₹50 Lakhs (almost £55,000/$70,000 and shared with the producer), but spoke of his delight in a video message watched by thousands inside the Dr Shyama Prasad Mukherjee Indoor Stadium at Goa University and millions watching on state broadcaster, Doordashan.

The film premiered at the Cannes Film Festival’s Director’s Fortnight earlier this year and was praised for its rather original take on the classic coming of age drama.

At the closing ceremony which included a spectacular dance show that went on probably a little too long, the minister of state for Information and Broadcasting (the Indian government department that runs the fest), Amit Khare, announced IFFI would celebrate the life and work of legendary director, Satyajit Ray at its next edition.

ACV also saw ‘Marghe and her mother’ – as the feature by Iranian director Mohsen Makhmalbaf wrapped the 190 features screened this year at the festival.

ACV saw a handful of movies in Goa – and all were decent films with strong messages subtly embedded within them. Among them was ‘Hellaro’ the Gujarati film, which opens in selected screens in London and Leicester today (November 29) and was the subject of a ‘special mention’ by the competition jury headed up by Hollywood stalwart and former Academy of Motion Pictures and Arts & Sciences president John Bailey. Among the other judges was Scottish director Lynne Ramsay and Robin Campillo, whose ‘120 beats per minute‘ so impressed acv in Cannes two years ago.

Another film ‘Jallikattu‘ which acv saw in Toronto in September won the Best Director Prize for Lijo Jose Pellissery. The film about a rampaging bullock in a remote village in Kerala is highly original and is a work of much flair and imagination. Read our interview with Pellissery here.

Another film that acv saw at IFFI was among the prizewinners – ‘Mai Gai: Crime No.103/2005’ is the incredible story of a mother’s 13-year long fight to bring the killers of her son to justice. Usha Jadhav, who plays the mother, won the IFFI best female actor award.

The film is based on a true incident – two police officers were sentenced to death last year for murdering the mother’s son – a scrap metal dealer, he has the misfortune of accidentally bumping into a police officer on his bicycle, when carrying a friend. Forced to empty his pockets, the police officer brazenly steals ₹4,200 (about £45) from him – the boy and his friend mildly protest, but the police officer takes great umbrage at this and wages a campaign of intimidation and fury, culminating in the torture and death of the boy. Read the full review tomorrow.

We will be wrapping our festival experience in a special video – don’t forget to subscribe to our Youtube channel and catch up with all our interviews from Goa over the last nine days here – we talked to actors Kabir Bedi, Adil Hussain, Central Board for Film Classification (CBFC) member and actor herself, Vani Tripathi, directors Mahnaz Mohammadi (‘Son-Mother’), Laxmy Ramakrishnan (‘House Owner’), and a group of film professionals attending Film Bazaar, including a few British Asians from back home participating in the market section of IFFI, hosted at The Marriott Hotel in Panjim, Goa, between November 20-24.

Signing off for today…

More tomorrow on IFFI50 (including film reviews) and more video interviews on our Youtube channel to come over the weekend and coming days!

Privacy & Cookies: This site uses cookies. By continuing to use this website, you agree to their use.
To find out more, including how to control cookies, see here: Cookie Policy
← London Film Festival 2018 – end game, highlights and a wrap!
‘House of my fathers’ – mixing myth, fable and allegory to tell a unique story about the conflict in Sri Lanka (London Film Festival interview) →