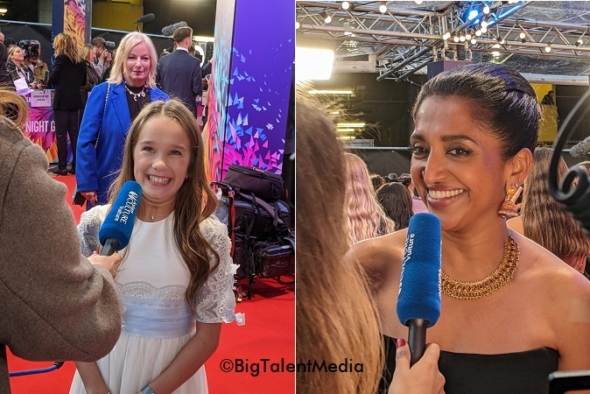 WE WERE on the red carpet last night (October 5) for the Opening Gala film of the London Film Festival (till October 15).

Presenter Trishala Lakhani caught up with several stars of ‘Roal Dal’s Matilda – The Musical’ to give its full name.

Check in our socials to see all the latest coverage from LFF 66!

In the photographs are Alisha Weir who plays the central character of Matilda and Sindhu Vee who reprises the part of the librarian, Mrs Phelps and is one of Matilda’s closest confidantes.

See our main preview here or above on our home page – http://asianculturevulture.com/portfolios/asif-kapadia-on-creature-and-its-world-premiere-at-london-film-festival-lff-2022-its-pure-cinema-main-lff-preview-see-below/

Privacy & Cookies: This site uses cookies. By continuing to use this website, you agree to their use.
To find out more, including how to control cookies, see here: Cookie Policy
← LFF 2022 wrap: Our highlights: ‘Creature’, Matilda and UK Asian Film festival reception for South Asian filmmakers and the films that impressed us… (gallery)
LFF 2022 : ‘Creature’ – Asif Kapadia and Akram Khan and others behind new film talk to acv… →