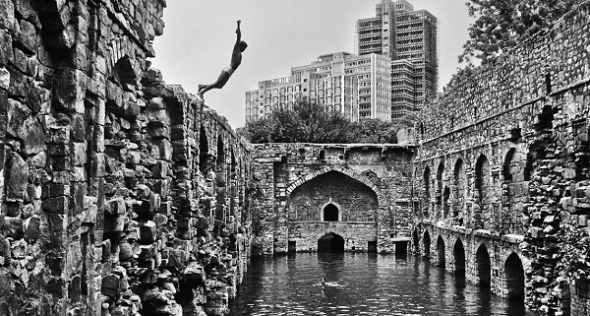 Iconic photographer has lens turned on him in revealing portrait…

RAGHU RAI is one of the world’s best known-photographers – for nearly five decades (he is in his 70s now) now his pictures of India have travelled the world and back.

Perhaps most famously, he is recognised as the photographer who put the horrors of the Bhopal Gas tragedy on the front pages of the globe’s newspapers.

On the night of December 2/3, in 1984, a gas leak caused widespread and in some cases fatal distress and suffering – estimates vary about the total numbers killed – but a few thousand died of gas related issues within days and within two weeks, 8,000 people had perished.

Rai caught images of children and old people who had died in the immediate aftermath and they made a huge impact across the world.

This documentary assembled by his daughter, Avani, is a fascinating portrait. She is a videographer essentially, but also picks up her camera to capture images.

The pair are currently based in Kashmir, and are documenting the region, taking pictures and conducting ‘interviews’ with those who have been caught in the civil strife.

There are scenes of Raghu Rai taking beautiful pictures of Dal Lake, getting caught close to a stone-throwing demonstration and interviewing a man who was blinded during the protests in 2017.

It is only one element of the film, which looks at Rai’s overall career and output – he was famously Mother Teresa’s main photographer, if we can put it like that.

In this 55-minute documentary, his daughter talks to him about the nature of his work and what made him do what he does.

He comes across as a man with a serene sense of the world and a duty to observe, not affect. He knows when things are wrong, but he will let the lens do the talking.

Avani spoke to David Moore from the University of Westminster and the audience at the Regent Street Cinema in central London following the screening.

There were technical difficulties with the link-up to India, but Avani explained that at at one point the producers (as people putting money into the project of documenting her father’s work) did not want her.

Who knows how that would have worked with a different director? Rai is probably not that accommodating – there are clear moments of tension between Dad and daughter and it seems unlikely another director would have enjoyed the same access.

The film seems a little incomplete and without questioning Avani further it isn’t clear whether this is just a one-off, part I or part of a something that is still taking shape and an instalment of something far bigger and grander. Rai’s wife is also interviewed, a well-known artist herself, but she is not titled and her observations lack the appropriate context.

Despite all this, if you are interested in the craft of news photography and photojournalism, this is well worth searching out. Rai has much to say and Avani deserves credit for pushing him and drawing out as much she can.

It will be interesting to see what perspective Rai brings to the debate about Kashmir. As we said, of the UK Asian Film Festival opening film – ‘Hamid’, which is set in the region, it is remains one of the most beautiful places on earth and has a culture to match – its poetry, art and gentleness are completely obliterated by the troubles and in no way deserve to be relegated – in fact, one might argue quite the opposite, in these exacting times. (Sailesh Ram)
ACV rating:*** (out of five)

The UK Asian Film Festival goes on until April 7 and until May 4 (and across Leicster, Manchester and Glasgow). Check listings: http://www.tonguesonfire.com

For more on the film

Privacy & Cookies: This site uses cookies. By continuing to use this website, you agree to their use.
To find out more, including how to control cookies, see here: Cookie Policy
← Adil Hussain – ‘Pareeksha’ and more international work on the horizon and to appear in new Star Trek series 2020 …(video) IFFI 50
Hellaro opens Indian Panorama section at IFFI 50, set to come to London November 29… (video) →