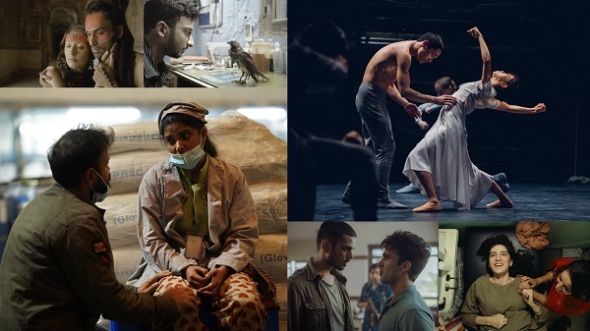 🎥 Sundance and Cannes award-winning documentary film ‘All that breathes’ comes to the UK for first time, video interview with director Shaunak Sen (see below) Releases this month in the UK

🎥 Cannes Jury Prize winner, the critically acclaimed Pakistani ‘Joyland’ comes to the UK and is up for Sutherland Award (given to a first-time filmmaker)

🎥 The Cloud Messenger – (‘Meghdoot’) Rahat Mahajan’s tale is one of myth, mystery and memory as two students find themselves drawn to each other

Some of these films show this week…

FILMMAKER Asif Kapadia first met Kathak dance supremo Akram Khan when he made his first Bafta-winning feature, ‘The Warrior’ (2021) but it took lockdown and a rehearsal of Khan’s English National Ballet commissioned work, ‘Creature’ (2021) for them to work creatively together.

Kapadia told www.asianculturevulture.com: “I went along to a rehearsal – and I know nothing about dance. I sat on the floor and watched them working and then at some point they pressed the button and they just performed, while it was still a work in progress and it just blew my mind. We shot a feature film in 10 days.”

This is different to a stage version of ‘Creature’ – not least because the music, rather than the dance, dictates the grammar of the film.

“It’s Vicenzo Lamagna who does all Akram’s shows. He created the music. So, the music almost comes first and then the dance works to that, and then I come along with a crew and make it into a film. It’s very different to the show I would say.”

Khan’s stage work was well received when it premiered as a stage dance work in November last year and it certainly was beautiful, visually striking and had distinct cinematic possibilities – even to the untrained eye (our review of that production).

In this, a man, called ‘creature’ is delivered to an arctic substation – the set is spare and haunting. The facility is run by a military and the poor man is subjected to all kinds of gruesome experiments and is made to suffer.

There is a distinct hierarchy and the man finds kinship – love – with a female cleaner. Of course, this is forbidden and the women herself has been subjected to sexual abuse by a military figure of some standing.

Kapadia told us about his ‘Creature’ on film: “I would say it’s a story of an outsider character, it’s a love story and very emotional.

“It’s also got these themes of the Authoritarian – this group come along and screw everything up and then go.”

Kapadia said for him the lines needed to be very clear – in the dance piece a lot is left to interpretation, though the broad contours are clearly discernible: a vulnerable man is exploited and abused, finds solace with another human being, but his situation worsens when the authorities discover what is going on.

Kapadia explained: “Because of the nature of Akram’s work, he would say it’s up to you (to interpret it).

“It’s really important for me to know what we are seeing here, so that’s why it was an interesting dynamic.

There’s a very mixed cast and the crew and the creatives behind it are also drawn from London but with international heritages.

‘Creature’ enjoys its world premiere at LFF on Saturday, October 15 (see below for the full listing).

Tricia Tuttle*, director of the BFI LFF, told acv about the South Asian films this year: “I would highly recommend ‘Joyland’ – it’s a pretty astonishing, not only because it’s really progressive and really bold and tells a story that we haven’t seen from Pakistan cinema very often, but it’s also really very visually beautiful and dynamic.”

She told acv her team wanted films that said something about the uncertain times we live in and looked at “shifting ideas of truth and about the climate crisis Everything is in flux and filmmakers are really responding to that.

“We’re always looking for quality and quality is both subjective and hard to put your finger on”.

Also in the line-up in the short selection is ‘Moshari’, which appears in the Feel the Rush of Adrenalin strand of short films (see listing below). Anyone looking for the next gen talent from Bangladesh should look at director Nuhash Humayun.

His film depicts a near-apocalyptic world – the West has pretty much vanished – and people are told to stay inside in Bangladesh to keep themselves safe. Two sisters retreat to their mosquito-net covered bed and the younger one begins to feel a vampire is out to suck her blood.

“You always see these perspectives from the West (of apocalypse and horror) and I thought what if I flipped it and explored this genre which is not done much in South Asian cinema,” Humayun told acv.

We will have more on the South Asian films and the directors behind these films as LFF gets under way.

Acv attended the BFI launch event in September and was able to talk to these other British filmmakers about their work appearing at the festival.

One of the undoubted almost hidden gems is a documentary about a little known British black funk pop group – Cymande.

This is covered in the film, ‘Getting it Back: The Story of Cymande’. Little known in the UK that is – Cymande did enjoy success in the US, with their stirring blend of funk, calypso, soul and Jazz. You are more than likely to have heard their music as it was heavily sampled, as hip hop took off in the 1980s, especially Stateside. The group reformed about 10 years ago and were re-discovered by filmmaker, Tim Mackenzie-Smith.

“They made a comeback 40 years after they quit – in their 70s,” he told acv at the BFI LFF launch. “These guys were the children of Windrush, and found their own vibe and they brought their own particular flavour to the music scene but it didn’t translate here.”

Mackenzie-Smith feels the racism of the 1970s in Britain held them back.
“Two became lawyers, one an electrician and they just got on with various things like that, but the quality of their music lived on.”

Those of you who follow British indie films closely will know that ‘Enys Men’ had its world premiere in Cannes earlier this year and will be distributed in the UK by the BFI itself.

Director Mark Jenkin told acv: “Any time my films played at the NFT (BFI Southbank), I am happy. A lot of friends and colleagues have not seen it, even though it’s played in Cannes, Poland, Australia and New York, so it’s a big relief to be here.”

Following the success of his first film ‘Bait’ and exploring a folk horror genre more typical of the British 1970s, Jenkin’s film follows a volunteer ecologist who is on her own on a Cornish island observing a rare flower. The isolation and lack of social contact starts to play on her mind…

Debut feature maker Thomas Hardiman has something very different to offer in his black comedy thriller, ‘Medusa Deluxe’. Set in the world of a high-stakes hairdressing competition in the north of England, and shot by acclaimed cinematographer Robbie Ryan, it’s something of an original.

“It’s a celebration of UK hair!”declared Hardiman. “We actually worked with a hairdresser called Eugene Souleiman who is one of the biggest hairdressers in the world – he does Nigella Lawsons’ and did the late Alexander McQueen’s.”

What drew him to such – the world of hairdressing and wanting to make a feature film about it?

“I went to the hairdressers as a kid with my mum. She went a lot. You take a passion, don’t you? I’m always interested in people who take passion into obsession and that’s what attracted to me to the world (of hairdressing) and it’s the heartbeat of the story.”

London Film Festival begins this Wednesday (October 5) with the opening film, Matilda or ‘Roald Dahl’s Matilda: The Musical’ to give its full official title – and features a very multi-racial cast including Lashana Lynch and Sindhu Vee.

*It was announced this lunchtime that Tricia Tuttle will be stepping down from her role as director of BFI Film Festivals in early 2023. She implemented a successful five year plan to increase audiences and get more industry participation.

LFF2022
October 5-16 – https://whatson.bfi.org.uk/lff/Online/default.asp
Check all listings with above for ticket availability