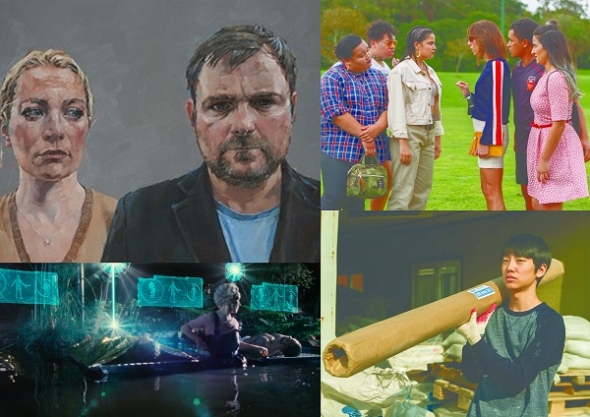 Happy New Year, Colin Burstead (Ben Wheatley)
THIS has play for today written all over it – and picked up by the BBC; made on a tight budget and crammed into two weeks, it has something to offer, even if it promises a little more than it can really deliver.
Colin Burstead (Neil Maskell) decides to throw a massive family New Year’s do in a country house. We get to know his mum, dad, sister and brother, an uncle, cousins and parents’ neighbours (Vincent Ebrahim and Sudha Bhuchar and fictional son, Asim Chaudhry of Chabuddy G fame). There is a brooding family resentment at the heart of it all – but Wheatley leaves it to the last act for the revelations and fallout to explode. It’s a bit slow, and rather windy and seemingly aimless (Dogme-realism style comes to mind) for very short stretches – not for the popcorn set, but anyone who has been to an awkward family gathering may find much of amusement and entertainment here.(SR)
ACV rating: **½ (all out of five)
Limited cinema release this month; and likely to be broadcast on the BBC at Christmas

Last Child (Shin Dong-seok)
THIS slow-burning domestic drama might be deceptively mild, but this is a film with wrenching twists as unpredictable as any Korean thriller, if more subdued. Sungcheol and Misook are a couple alienated from one another after the death of their son who drowned while saving another child. He is now considered a hero but that’s little comfort to his parents whose lives have since been torn apart.
A film that isn’t shy about taking its time, Last Child can seem derivatively, too patiently handled, yet the film’s second half thrusts the viewer into wholly unexpected territory, asking questions around what is preferable to know in the event of a tragic death, both for those left behind, and for those who might be responsible, with its emotional ruptures coming from how writer-director Shin Dong-seok juggles wider issues around societal cover ups, social hierarchies, guilt, revenge and second chances, specifically about who deserves them. Well worth investigation. (SC)
ACV rating: ***½
No UK release known (released in Korea this month)

Diamantino (Gabrial Abrantes & Daniel Schmidt)
A FILM like no other, ‘Diamantino’ follows a millionaire footballer with the physique of Ronaldo and the child-like harmlessness of Michael Jackson (pre-abuse-allegations, naturally).
When our beautiful, dumb hero becomes a national shame after failing a penalty kick, he is rendered a sobbing mess.
Looking to redeem himself, he adopts a refugee. But instead of redemption, the goodwill gesture unwittingly sets Diamantino up as a target of an investigation into offshore tax havens and the source of a new government cloning project, setting off a narrative that digs into nationalism, eugenics, a Portugese answer to Brexit, and the premise of football as a cure for a nation’s poor self-image. Experimental, playful, totally out there, yet still touching, ‘Diamantino’ is a gem of political fantasy that’s well worth seeking out. (SC)
ACV rating: ****
No UK release date known; won award at Critics Weeks in Cannes; US rights acquired by Kino Lorber

The Breaker-Upperers (Madeleine Sami & Jackie van Beek)
SEEMS half-plausible that there should be an agency offering people to chance to break up with partners – with a little help.
Mel (Madeleine Sami) and Jen (Jackie van Beek) play the two women behind the agency.
This is New Zealand but not as you have ever likely to have seen it before.
Mel is half-Indian, bisexual and naturally flirtatious – Jen on the other hand is straight-laced, business-like and has long given up on men as romantic possibilities. It’s a great set up and throw in a strong dose of minority Maori culture and you have a wonderful hotchpotch of themes and currents, but the main focus remains humour. Some may find it tries a little too hard or is just rather inconsequential – but it does tickle a few bones, if you are in that sort of mood. (SR)
ACV rating: ***
Netflix acquistion

London Film Festival 2018 reviews (part I) – Maya, Rajma Chawal, Sorry to bother you, The Hate U give, Assassination Nation

Privacy & Cookies: This site uses cookies. By continuing to use this website, you agree to their use.
To find out more, including how to control cookies, see here: Cookie Policy
← London Film Festival 2020 Reviews more (2/2): The Human Voice; 200 Meters; Limbo; Bloody Nose, Empty Pockets; Time
London Film Festival 2020: ‘Lovers Rock’ – Nostalgia and romance don’t get better than this (review) →