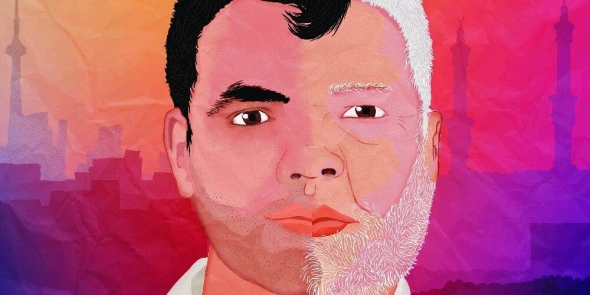 Born in Pakistan, raised in Canada, the son of an Army officer, Arshad Khan has much to say when we talked to him about his first documentary feature…

*There are spoilers in this, please note*

“9/11 MADE ME WANT to become a Filmmaker”, said director Arshad Khan, the man who put the film ‘Abu’ together.

It’s a bold, brave statement and not one usually expressed by a person declaring why they chose a certain career path, but then Arshad is no ordinary person.

His soft, comforting voice narrates the powerful documentary ‘Abu’ which is a story about him, his family and the culmination of years of life experiences, including abuse, migration, and personal questions regarding sexuality and religion.

Though it sounds like a serious watch, these sensitive topics are brought to life through humour while being illustrated by archive photos, animation and footage which include rare videos of the city of Islamabad, and photos from his childhood.

Storytelling is in Arshad’s blood and while he confesses to being the ‘history keeper’ in his family, having kept diaries since the age of seven, it was in fact his father, whom much of the film centres on, who was the original visionary.

He was one of the first people in Pakistan to purchase a VHS camera recorder and as such, Arshad and his family own incredible footage of their life. And it’s this that allowed Arshad to weave together an 80 minute film that charts a number of personal journeys.

But why does one make a film about themselves? Arshad explained in a one-to-one at the London Film Festival teas: “In 2011 my father passed away and I decided to make a five minute film to play at his memorial. But when I started to stockpile footage and memories I realised I had so much content that I decided to expand it into a bigger film. I was just wrapping up film school where you are taught to work with what you have. So I decided to expose myself.”

The film follows a liner path of Arshad’s life juxtaposed against that of his parents.

There are some shocking admissions early on, as he describes his childhood, falling victim to sexual abuse and beginning to realise that he is gay.

He talks us through the many emotions he experiences, how he develops a friendship as a teenager with another young boy and the impact that moving from Pakistani to Canada had on him.

At the same time he explains the career of his father, who worked in the army, became a businessman, then lost everything.

Both stories are equally as fascinating despite the fact there is conflict between the characters.

Arshad explained: ‘I hated my father for a long time but his death moved me so much. Examining his life for the film process was cathartic.’

Arshad’s mother and sister (he is one of six siblings) are also referenced in the film and it’s interesting to see how different his mother and father adjust to life in Canada.

While his father struggles to find work, his mother revels in the opportunity to make a living and socialise with new friends.

This marks the start of the change in his dad’s character. A highlight of the film is seeing this development of his father, beginning life as an orphan, becoming successful in his career, losing his self-esteem, discovering faith and becoming a devout Muslim.

Archive photo of Arshad and his father

Meanwhile Arshad is faced with the realties of coming out, living as a gay man who distances himself from his family, then has to face them.

There are some very honest and surprising moments and it’s these that have resonated with audiences in the most unexpected of way.

Arshad revealed: “I wanted to tell a story that was entertaining that really showcases the existential crisis we all have.

“The complexity of a father son relationship, the anxiety of migrants and the trials and tribulations of being from a South Asian community which resonates with many people regardless of their ethnic background and sexual preference.

“When I made it I didn’t know what people would think about it but it turns out that old and young people alike are loving it. I showed the film at a school in Montreal and it was the first time the kids in the class didn’t take out their mobile phones because they were so captivated.

“They returned early after their break to finish watching it and afterwards, four students came out and no one knew they were gay. If you can move people like this through filmmaking then that is a success.”

Though ‘Abu’ has yet to find distribution in the UK it has found itself screened widely on the international festival circuit, including Hamburg, San Francisco, Amsterdam and New York and Arshad hopes to take it to India, Pakistan and Bangladesh.

Coming back to why he wanted to become a filmmaker after 9/11, Arshad recounted: “I wasn’t ok with how 9/11 became an attack on my identity and that’s why I make films. There are many stories I am working on including fiction but for now I hope to show ‘Abu’ to the world.’