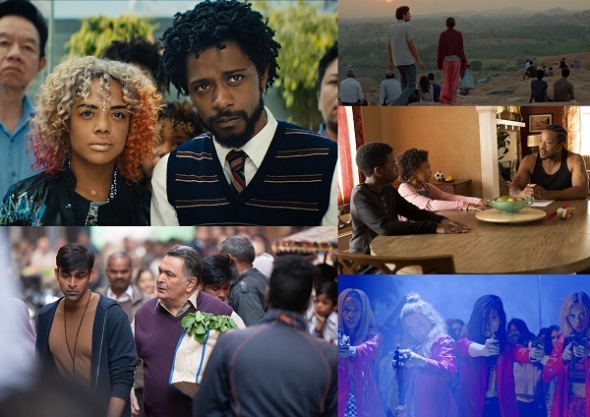 Part I of reviews of films seen at London Film Festival

Maya (dierctor-Mia Hansen-Løve)
ANOTHER character study from Mia Hansen-Løve (MHL), this time about a French war reporter rescued from Syria who sets out to escape his trauma by setting off for Goa. Like a companion piece to ‘Eden’ or ‘Things to Come’ where Isabelle Huppert’s teacher proved too restless to pause for breath, Gabriel (Roman Kolinka) too is desperate for resolution.
While Hansen-Love is keen to resist obvious signposts, Gabriel finds it, somewhat, in Maya, the young daughter of Gabriel’s godfather, Monty. Here, the film seems to lose its coordinates, ending up equal parts beautifully crafted India travelogue, romance – a cousin to the older man-younger girl dynamic often seen in French cinema, and existential musing.
The title however is misleading – though intelligently acted by Aarshi Banerjee, Maya’s titular character has little to do. This might be better titled Gabriel, a film about a man’s search for himself in a foreign land, particularly as Kolinka gives Gabriel all the questing yearning you hope for. As is typical in MHL’s work, the film has a cerebral arc beyond its characters’ internal questions – they riff on wider concerns (here, the commercialisation of Goa and the impact of tourism) and moments where most filmmakers would linger are cut short – a little like Maurice Pialat, MHL lets you fill in the gaps. Yet despite its sensitivity, MHL can’t quite connect all the film’s parallel tracts. War trauma, PTSD, Goa, Gabriel’s quest to recover himself, his romance: Maya gets some of the way there, but it over-reaches itself, leaving little satisfyingly explored. (SC)
ACV rating:*** (all out five)
With Orange Studios (France)

Raja Chawal (Leena Yadav)
HER FOLLOW-UP to critical and international hit ‘Parched’, director Leena Yadav looks like she’s now gunning for the multiplexes (the film was picked up by Netflix post-production and will release November 30).
Starring Rishi Kapoor as a father looking to understand his rockstar-aspirant son (Anirudh Tanwar), when the latter returns home after the death of his mother and attempts at conversation fall flat, the family patriarch sets up a fake Facebook profile and masquerades as an attractive young girl (Amyra Dastur) to ‘chat’ in place of his earlier dinner table interrogations. Contriving a set-up that covers death, father-son estrangement, generational divides and how social media can both interfere with and start relationships, ‘Rajma Chawal’ shifts its focus at regular intervals.
At first appearing to be a tearjerker of family reconciliation, it then sets itself up as a rom-com, before truly coming alive in its final act as a screwball comedy-caper. Yadav hits all her beats, if never quite earning them, its Big Emotional Moments popping up at the right times, yet never quite justifying their appearance. Still, even as the film’s sympathies are mostly aligned with Rishi Kapoor, it also challenges prejudices about ‘fast’ girls, making it a film as much for those nostalgic for older Bollywood as it is about modern communication breakdowns and romance outside of traditional structures. (SC)
ACV rating: ***
Netflix acquistion (release date November 30)

Tessa Thompson and Lakeith Stanfield in Sorry to Bother You

Sorry to bother you (Boots Riley)
IS A POPULAR critique of Capitalism possible in a film?
Yes, sir – Boots Riley’s film is both funny and telling in this regard – at least against the usual and necessary suspects.
Cassius Green (Lakeith Stanfield) is a sharp-witted dude who just needs a decent paying job.
Living in the garage of his slightly better off (just, but also in considerable debt) uncle, he winds up as a telemarketer.
Here, he quickly learns to lose his blackness to sell to white folks (mostly) and is wildly successful, earning him a spot further up his building and with a team of super sales folks.
From here things get even more weird and funnier – cue a character called Steve Lift (Armie Hammer), who is a multi-billionaire who believes he is offering to save the US (economically) by employing people for life (no money, but basic living expenses covered). Slavery by another name. Lift is mad and thinks that the answer to labour productivity is a new species… it’s all very funny and crazy, but it does have – and make a point. The giant penises make another. (SR)
ACV rating:****
UK release: December 7

The Hate U Give

The Hate U Give (George Tillman Jnr)
TIMELY and emotionally panoramic in its sensibilities, this film, centred as it is with the senseless shooting of a young black man, is as good a film as you will see on what it means to be growing up in the US…and black.
Adapted from Angie Thomas’ Young Adult novel, Amandla Stenberg as ‘Starr Carter’ gives a measured and weighty performance as the film demands.
Part teen growing up tale (replete with trendy music) and coming-of-age political education, Tillman handles the material adeptly, even covering the police take on shooting young (black) men through the rapper Common, playing Starr’s senior cop uncle.
Impressively undidactic (in a cinematic sense), Tillman and his cast deserve huge praise and this is a film that should comfortably outlive its contemporary moorings. (SR)
ACV rating: ****
On release in the UK now

Assassination Nation (Sam Levinson)
COVERING similar age territory to ‘The Hate U give’, Levinson’s teen slasher centres around a group of four smart, sassy and attractive young women – one of whom is black.
It starts in teen mode and works towards its violent and brutal conclusion at first a little unassumingly but gathering real force in its last quarter.
For many of a progressive nature, this might be where an outright gender war will take us. Brett Kavanaugh, take note.
More seriously, this horror story is well pitched towards its primary audience (young people) and should move some enough to understand toxic masculinity is sometimes at the very heart of popular culture at one level. Perhaps, Levinson’s choice of attractive cast and attiring them in skimpy outfits is part of the unease he plays with throughout the film. Indeed, there is an unsual warning at tbe beginning – a distinct and entertaining fable if a little gory and ‘horror flicky’ by the end. (SR)
ACV rating: *** ½
UK release: November 23

You will also find stories and interviews on ‘House of My Fathers’, Manto (ACV Youtube) ‘Soni’ and Tumbaad’, ‘Been So Long’ (soon), put either the title into the acv search bar or London Film Festival