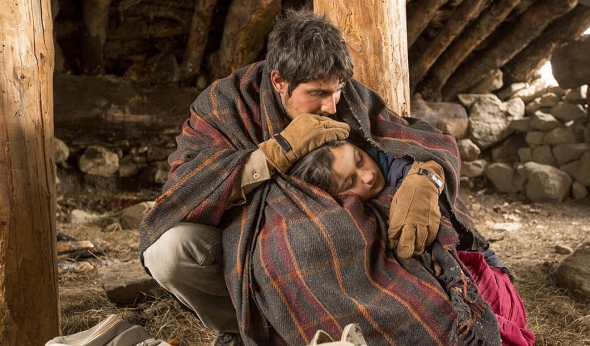 Known as the Yash Raj of his age for his romantic films, Imtiaz Ali has delivered another fine instalment of comedy, romance and high drama…

“HIGHWAY” – which celebrated its worldwide premiere in the Panorama Section on Thursday (February 13) at 64th Berlin film festival – is a Bollywood blockbuster road-movie.

It’s the fifth full-feature by renowned and commercially successful Indian writer-director Imtiaz Ali, and also the first feature produced under his own company, Window Seat Films.

With the duo of rising Indian film stars, Randeep Hooda and the gorgeous but relative newcomer actor-model Alia Bhatt (pictured below) at its wheel, “Highway” guides us through a visually opulent and heart-warming story. It’s a mind-expanding journey-of-a-lifetime tale.

By mistake, Veera is abducted by a group of unsuspecting criminals led by a rough fist of a man, the cold-hearted Mahabir (Randeep Hooda).

At the back of a rusty van, Veera is driven to the other side of India. When the gang discover Veera is a daughter of a leading industrialist, they decide to demand a ransom from her family.

Surprisingly, the wayward city girl gradually begins to enjoy the poor, yet adventurous nomadic life, more than the tyranny of her rich and hypocritical family.

On the road through magnificent and never before experienced India, Veera learns her true nature, and helps to brings out the gentle and sensitive side of Mahabir – traits which the criminal himself never knew he had.

Although the pair know they are far from a perfect match, and can sense that their days of careless freedom are numbered – they enjoy every sunrise and sunset they witness, every river, tree and mountain they leave behind.

This is beautifully expressed with a soundtrack written by Academy and Grammy award winning musical maestro, AR Rahman.

Although the lyrics convey the feelings of main characters pretty straightforwardly, this should not be mistaken for superficiality: there is an implicit wisdom and sense of seizing the moment in every song, and the percussion has a new-age twist. “Don’t sell your diamonds at the vegetable market / Keep them close to your heart and go your way”, sing the Nooran Sisters in wonderful harmony as we watch Veera’s face fill with joy.

The traditional song-and-dance aspect of Bollywood is still present, but the songs are not sung directly by the characters – they embody off-screen emotions, eliciting depth and stirring feelings.

“Highway’s” narration structure is that of a classic Hollywood road movie (think of “The Searchers”, “Bonnie & Clyde”, “Thelma & Louise”, “Rainman”, and “Wild at Heart”, to name just a few), where the protagonists sacrifice their secure but mundane every-day routine for the sake of discovering that which is out of their reach, and out of their comfort zone – be it distant lands or the depths of their own characters, usually both – to the point of no return.

“Highway” is what a westernised Bollywood-turned-Hollywood blockbuster looks like – the formulaic and well-tested story is so universal that almost everyone anywhere can relate to it – suggesting it could have an audience beyond Bollywood, given appropriate signposting.

Yet traditional techniques are still deployed, when Veera and the gang break into a dance of joy at one point, indicating that they do hear the off-screen music and simply cannot help but use conventional means of expression.

Mahabir, on the other hand, is hesitant to join in, and watches the nonsense from a distance.

After all, there must be a reason – even though it seems to be a deliberately cheesy one – the first credit after the film ends is that of a body language consultant. (What is that?)

Another good parallel to illustrate the crossover between old-style Bollywood and classical Hollywood, “Highway” is based on Bhatt’s acting.

Her exuberance is controlled with subtlety, and she manages to grasp the self- awareness of her character’s position to the point of even mocking it for its traditional, pre-destined path.

Just as Alia strives to break out of her upper-class surroundings, and in the end – her own destiny, “Highway” also tries to break away from traditionally symbolic storytelling to a more realistic style of shooting with ground-rooted performances, such as Hooda’s.

In this aspect, “Highway” is quite a traditional film for a Hollywood audience, but might be very postmodern for Bollywood – yet it plays strong in both fields.

As in every road movie, Veera’s and Mahabir’s journey comes to an end. What kind of end should remain a mystery – for your viewing pleasure.

“Highway” was surely one of the most pleasurable and all-encompassing stories that premiered at the Berlinale this year.

www.asianculturevulture.com star rating (out of five): ****

Ruta writes: There were many long applause following the showing at the Berlinale. The audience  was very impressed by the director’s calmness and intelligence as he appeared on stage, and thanked everyone from the bottom of his heart. All the cast said they appreciated every single person in the audience, and will always remember us, since we were the first to see this film, so will be forever in their hearts. Alia was glowing and looked terrific. She said, on stage, that having a premiere in Germany and being in Berlin was very special for her, since her grandfather was German and ran an underground paper against Hitler.