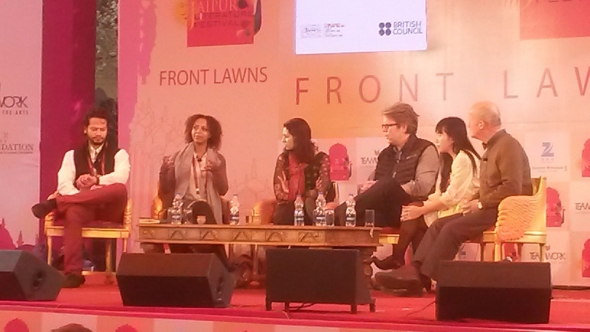 FROM the high-brow (Wittgenstein, no less) to the low-brow (vulvas and vibrators), and quite a lot in between (with Professor Amartya Sen’s ‘God of Medium Things’), the Zee Jaipur Literature Festival had something for everyone.

Billed as the world’s largest free literature festival, there’s little that’s really modest about this author extravaganza or “Kumbh of literature” as Margaret Alva, Governor of Rajasthan (the state in which Jaipur sits), described it.

And that is no bad thing. More than 200 authors appeared and there must have been more than a 100 sessions devoted to various books, themes, languages and politics.

With such a huge and diverse range of offerings, it’s always a challenge for a modest publication (such as ours at present) to cover everything and sometimes the best is the least touted or popular.

Intimacy has its own benefits and there are always mutterings from some quarters that the festival has got ‘too big’ and for a few the egalitarianism of the festival, in general, sits uneasily with the idea of an elite literature or an intellectualism at its most refined or sophisticated. Bunkum.

Sure, not everyone is going to be interested in ‘Wittgenstein’ or ‘The Life of Roman Times’, but sometimes the carping of those who complain about the festival getting too big, looks simply like a distaste for the hoi-polloi or ordinary folks who don’t usually read too many books, have only a basic understanding of English (if that) and no more than a vague knowledge about the authors, their books or the themes under scrutiny. Remember the festival is free, you simply need to register to enter.

Curiosity is a wonderful impulse and when you see these people (in an Indian context, relatively easy to spot, you wonder: do they understand, what are they getting out of this?) But those concerns are overwrought. Who cares? It may not be any more than an impulse to see a few celebrities at close quarters.

Some might baulk at the idea of writers being celebrities but in our 24×7 media saturated world that should be no real shock or surprise, and at a certain times, in a few sessions, it was discussed, dissed and reluctantly ceded.

But the difference is that many of these ‘celebrity’ writers often have interesting and meaningful things to say (unlike many actors who seem to dominate the pages of even reputable printed magazines in the West).

Professor Sen’s opening keynote address was wonderful – many stood in appreciation. It was both simple and profound at the same time.

Using the idea of meeting a fictional and symbolic, ‘God of Medium Things’, it had very many practical suggestions and very generally pinpointed some of India’s deepest problems.

Not too sound to repetitive (read here http://asianculturevulture.com/portfolios/jaipur-lit-fest-sen-sensibility/), there was an emphasis on alleviating poverty, hunger and destitution.

India still has too many people stuck in this category and despite more than 60 years of independence this number remains stubbornly high.

What Sen said was that India has the means to tackle this but much of it breaks down in delivery and management.

Is it still not shocking that a country that can send a probe to Mars, cannot provide each of its citizens access to running water, electricity or…toilets? Sen pointed out that 50 per cent of Indians still have to defecate in the open.

He even raised the issue of section 377, the law that once again makes homosexual relations a criminal offence in India.

For many here in India, it is still regarded as an ‘unnatural practice’ (a gentle riposte: nobody is asking you to think about it like that).

In the hallowed surroundings of the Diggi Palace where the festival is hosted and Sen delivered his address, it went down extremely well.

As another author, Amish Tripathi, who was also at the fest and talked to us when he was in London says, liberals in India have to stand up and shout more and challenge conservative forces.

Sen’s contribution has to be one of the finest statements of Indian liberalism ever espoused and in that respect it was virtually pitch perfect and a great way to open the 2014 Jaipur Literature Festival.

Shereen El Feki, author of “,Sex and The Citadel, ” was both blunt and brilliant in a session devoted solely to her book with interlocutor Jonathan Shainin adding some nice American observations to the talk.

Her study of sex in the Arab world is illuminating and asks important political questions and those questions can be turned to India too, she agreed.

Like Gloria Steinem, who was equally inspiring on some of the very same issues, she reminded people that control of women’s bodies is not something patriarchal societies or men (as individuals so inclined) give up easily.

In the wake of further shocking rape stories coming out of India, that much seems obvious. There are men (and some women too) who believe women must be punished for having any sexual feelings that are not proscribed within marriage (even then, El Feki said memorably, women in the Arab world often resorted to tacky lingerie to get what they desired).

She pointed to a time when the Arab world was much more tolerably licentious and freer than the West and she read from one particular passage that described a woman getting pleasure from a dog’s tongue and the creature applying itself quite vigorously to her … You get the idea.

Equally, vibrators remain strictly forbidden both in much of the Arab world and India itself and it was both slightly unsettling and thrilling (in a taboo-busting way) to hear El Feki take these subjects head on (sorry) with a rapt audience.

Another memorable session was the assembly of authors the festival had gathered to discuss ‘The Global Novel’.

It reflected the global pull of the festival to have Jhumpa Lahiri, Jonathan Franzen, Jim Crace, (all global award-nominated authors) discuss this theme with the relatively new voices on the block, so to speak, in Maaza Mengiste, and Xialou Guo, with the proceedings moderated by Chandrahas Choudhury.

Irrfan Khan added some contemporary Bollywood-Hollywood glamour to the fest, contributing in his home city to talks, sometimes in Hindi, about works from low caste poets and the role of Bollywood in popular Indian culture.

Away from the magnificent, sprawling and enchanting Diggi Palace, there was music in the evening at the nearby Clarks Amer.

It too was wonderfully eclectic and global in spirit, with both traditional Indian sounds, the Jaipur Kawa Bass Brand and music from Tinariwen (who emanate from the southern Sahara, including Mali), among several who kept festival spirits warm and doughty (even if the weather challenged that, as it did on Tuesday, when it rained and ACV left the city).

Yes, there were some no-shows in the form of Shashi Tharoor, the Indian novelist-politician, whose wife’s mysterious and sudden death prevented him from attending the fest, Indian television anchor and star interrogator, Barkha Dutt, whose journalistic engagements connected to the above put paid to her involvement and iconic poet and Bollywood lyricist Javed Akhtar who was unavoidably sequestered elsewhere.

Despite all this, there was much that was good and valuable and with a veritable cast list already seemingly assembled for next year that includes Malala Yousafzai and the most venerable Sir VS Naipaul, the festival promises to be another powerful magnet for all those who love ideas, books, or are just keen on a bit of celebrity spotting or fancy some light intellectual stimulation in a some splendid surroundings.