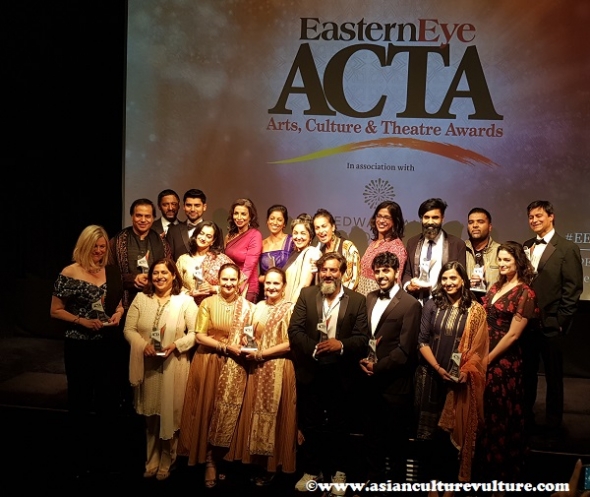 WE STAND on the shoulder of giants – it is a much-used phrase, but rarely does it have a near-physical import – at last night Eastern Eye’s Arts, Culture and Theatre Awards (ACTA), it palpably did.

The now much venerated and 30-year-old newspaper’s fourth annual awards event recognising achievements from the world of entertainment, arts and culture, was an event that touched many.

Why? Because there in that room – at The May Fair Hotel screening room – with the young and the not so old, there was a deep understanding of the sacrifices and struggle it can take to get to the top – and now there is a very distinct passing of the baton.

From Nitin Ganatra’s acting award for his performance in the Park Theatre play ‘The End of the Pier’ (reviewed by ACV’s Suman Bhuchar) on www.asianculturevulture.com and was name checked by Ganatra himself twice) to Antonio Aakeel’s award as The Arts Council’s Rising Star for his role in the film, ‘Eaten By Lions’, it was clear this was a community within a community – and one that has a special affinity with itself.

Akeel said Ganatra was one of his heroes when he started out – and so it was a bit special to be receiving an award at the same awards ceremony.

Amit Roy, Eastern Eye editor-at-large, and chairman of the acta judging panel in his keynote address, remarked: “I would urge Asian parents to encourage a love of theatre, movies, dance, drama, painting, photography and, above all, books in their children for another reason.

“It is spiritually nourishing – and will add to the sum total of happiness in Britain.”

There was much cheer for Suki Dhanda, a well-established photographer but now turning her craft into art with an exhibition – ‘Race, Place and Diversity by the seaside’ – an exploration of Plymouth, where she first studied photography.

The in-joke of the evening – prompted by compere and BBC broadcaster Nihal Arthanayake – was, how did all these creative but clearly smart folks manage to avoid going into medicine and carve out a career in the arts?

For some, the challenges were different – academic and Oxford History professor Rana Mitter – who won the ACTA for best presenter (‘Chinese Characters’, BBC Radio 4), said his parents encouraged him to learn Chinese, and never once told him he should be doing medicine. Today, he is one of the world’s leading authorities on the growing Superpower.

For others like Ash Tandon who won the best actor award for film, tv or drama (for his role as Detective Chief Inspector Deepak Sharma in ‘Bodyguard’), it was a fight, but acting won out.

There was also a video message from Mandip Gill who won the Eastern Eye People’s Choice Award – as voted for by readers of Eastern Eye and www.easterneye.eu.

The ‘Doctor Who’ star topped the polls and Shobna Gulati – who plays her mother in the BBC drama, (for which Gill won, essaying the role of Yasmin ‘Yaz’ Khan) – collected the award on her behalf and revealed that the young actor is so inspiring and talented, she has her own hashtag. #BeMoreMandip.

The Aga Khan centre is King’s Cross, London is a marvellous building – combining modern architecture with a strong sense of the plurality of Islam, both past and present – it has gardens within, modelled on North African, Persian and Mughal traditions. It won Eastern Eye’s Editor’s Special Award. The centre is just a year old.

The evening came to a close with the Eastern Eye’s Editor Award for outstanding contribution to the creative industry – which went to Sudha Bhuchar and Kristine Landon-Smith, the founders of Tamasha Theatre.

Though separate now, and involved in new ventures, Bhuchar explained that they came together as mates and not much else – they did not have a grand vision in 1989 when they created the theatre group. They went onto create the original ‘East is East’ , ‘A Fine Balance’ and ‘Wuthering Heights’(both adapted for the stage from the novels) and helped to launch the careers of such names as Parminder Nagra and Jimmi Mistry, among many others.
Landon-Smith, whose mother is Indian, said when they put on their first production, ‘Untouchable’ it was difficult to find 12 actors of South Asian heritage.

What talent is making that wheel turn…

All images in this gallery courtesy ©AMG

For caption only, hover cursor over picture – enjoy!

In all 20 awards were presented on the evening.

To watch the event in full, see here http://www.actas.co.uk/Live.php

Literature
Winner: Preti Taneja for’ We That Are Young’
Amit Dhand for ‘City of Sinners’
Gautam Malkani for ‘Distortion’

Eastern Eye Award for Best Scriptwriter
Winner: Vinay Patel for Doctor Who: Demons of the Punjab
Anil Gupta and Richard Pinto for Tartuffe
Iman Qureshi for The Funeral Director

Privacy & Cookies: This site uses cookies. By continuing to use this website, you agree to their use.
To find out more, including how to control cookies, see here: Cookie Policy
← www.asianculturevulture.com’s Sailesh Ram to be in conversation with literary platform, The Gronthee on Monday (July 6)
Bollywood asianculturevulture vibes – production to resume, as nepotism debate simmers following star Sushant Singh Rajput’s suicide… →