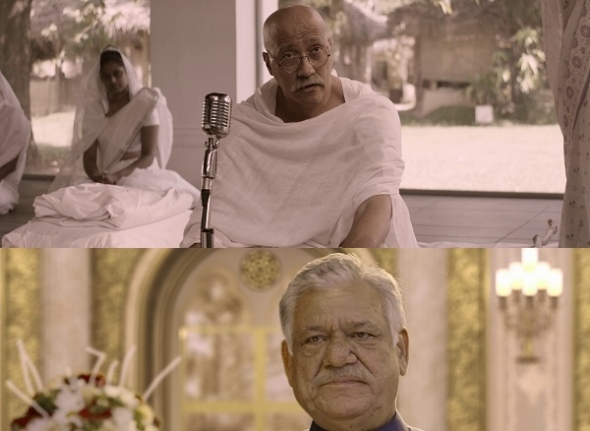 Mostly revered (a right-wing revisionism has been under way for a time), his work and life have been recreated on celluloid many times and in recent books and on stage…

Everyone knows about Richard Attenborough’s Oscar winning’ 1982 epic drama, ‘Gandhi’ (it won four Oscars’ – best picture, best director, best actor, best screen play) and this epic – let’s be fair – has drowned out other artistic interpretations of the man whose ideas, philosophy and character impacted hugely on other people – and for much of the 20th century.

This is not a finite list, but culturevultures, you may enjoy deciding how many you have read or seen …and keep adding to it. (Please note we have only dealt with fiction here – in books and plays, and films – not documentaries or non-fiction) .

‘The Gandhi Murder’ – which came out in January 2019. Directed and written by Pankaj Sehgal along with Algerian director Karim Traidia, ‘The Gandhi Murder‘, espouses a farfetched theory about why Mahatma Gandhi was assassinated as he was by a Hindu fanatic, Nathuram Godse around 71 years ago with actor Jesus Sans as Gandhi and Rajit Kapur as Nehru.
The directors say the film is based on “verified events” and it boasts a fine cast of international performers, including Vinnie Jones, in a cameo role. Mark Moses ( TV serial, ‘Desperate Housewives‘) and the late Om Puri as a top ranking policeman. Other cast members include Stephen Lang and Luke Pasqualino.

‘Gandhi My Father’ – Feroz Abbas Khan’s 2007 film is about the great soul and his troubled relationship with his eldest child, son, Harilal Gandhi – the story is based on a biography ‘Harilal Gandhi: A Life’ by Chandulal Bhagubhai Dalal. Khan also did a play, Mahatma v Gandhi (1998) on similar themes.

‘Gandhigiri’ – a 2016 film about the values of Gandhi’s wisdom in todays’ world. It featured Om Puri and is about a returned Non-Resident India (NRI) who believes in Gandhi’s values and encounters people who are not on a good path.

And then of course more famously…

‘Lage Raho Munnabhai’, a 2006 comedy drama by Raj Kumar Hirani (a follow up to ‘Munnabhai M.B.B.S’ in 2003) – featuring Sanjay Dutt as a the loveable rogue, ‘Munnabhai’ who begins to see the spirit of Gandhi all around him and through this begins to practice – Gandhigiri (a word coined to described Gandhi – isms). Dilip Prabhavalkar plays Gandhi in this film and Hirani said in an interview he wanted to make this film, as many people in India today, didn’t know about Gandhi and he wanted to revive an interest in the man.

‘When Chaplin Met Gandhi’ by James Kenworth This play was presented as a site specific show at Kingsley Hall – with actor, Divian Ladwa as Gandhi (he was in the play, ‘Child of the Divide’, 2006, and also in ‘Lion’ – as the druggie brother) and this was directed by Matthew Xia (now director of Actors Touring Company).

This delightful play reimagined what happened when a leading celebrity met a political figure of the day. The two characters could not be more different and yet they managed to click, especially if the performances of Divian Ladwa as Gandhi and Mark Oosterveen as Chaplin are anything to go by.Performed in Kingsley Hall, the place where Gandhi stayed for 12 weeks during his trip to London for the Second Round Table Conference in 1931 — the aura of history surrounds the place and the audience was transposed back in time. (I saw this play and my review is below).

https://www.youtube.com/watch?v=FXKVoaQNLG8 – here is the trailer and a copy of the script can be purchased from TSL Drama
https://tslbooks.uk/when-chaplin-met-gandhi-james-kenworth/

‘Sammy: A word that Broke an Empire’ (2007) play by Primetime Theatre company, headed by Lillete Dubey, written by Partap Sharma – the play featured Joy SenGupta as Gandhi, it tells the story of the man from his journey from South Africa to India and his transformation from a barrister into a leader of national import and becoming a Mahatma (great soul) – his conscience was played by Ravi Dubey (late, husband of Lillete).

‘Satyagraha‘ (‘Truth Force’) – This is a most incredible opera and deals with the story of Gandhi and his early years at Tolstoy Farm, South Africa where he began to explore his philosophy of non-violence as a political tool. The opera in three acts, is hypnotic and mesmerising was written by Philip Glass.
It was originally performed in 1980. It was revived in 2007 with the English National Opera and Improbable Theatre & co-produced with the Metropolitan Opera, New York), and has since been performed several times since then.
Each act features a prominent figure connected to Gandhi: in Act 1, feature Leo Tolstoy and Act 2, it’s Rabindranath Tagore and Act 3 features Martin Luther King who emulated his ‘ahimsa’ ( the concept of non-violent) approach to politics. Improbable theatre founders Phelim McDermott and Julian Crouch created the staging which includes giant papier-mâché puppets, video projections and an incredible set design. This is truly a masterpiece. https://www.eno.org/operas/satyagraha/

‘Waiting for the Mahatma’ by RK Narayan first published in 1955 is considered to be his most political novel – set in the fictional town of Malgudi – it tells the story of Sriram – a young man – whose father died fighting in WW1. Sriram is raised by his granny who has been saving his dead father’s military pension. Sriram becomes a follower of Gandhi, wears Khadi and gets involved in the Quit India movement and the story follows his life from 1930 up to the assassination of Gandhi in 1948, intersecting the personal with wider political events.

‘Untouchable’ by Mulk Raj Anand (1935) is the story of a day in the life of a young, latrine sweeper called Bhaka where he gets trodden and humiliated – but he has heard that Gandhi is coming to town and how things will change for the untouchables – as the Dalit community was known then – the story was also the debut play, by director, Kristine Landon-Smith and Sudha Bhuchar when they founded Tamasha theatre company –
http://www.tamasha.org.uk/about/history/ and opened at the Riverside Studios in December 1989 performed in Hindi and English on alternate nights.

Privacy & Cookies: This site uses cookies. By continuing to use this website, you agree to their use.
To find out more, including how to control cookies, see here: Cookie Policy
← Manchester International Festival 2021: Imtiaz Dharker on ‘Poet Slash Artist’ and her new artwork/poem ‘My Breath’ (video)
Manchester International Festival 2021 (July 1-18): Rashid Rana, Imtiaz Dharker, Zoe Iqbal, Abi Sampa, Akram Khan & Naaman Azhari: artists stepping up and back onto a platform…(preview) →