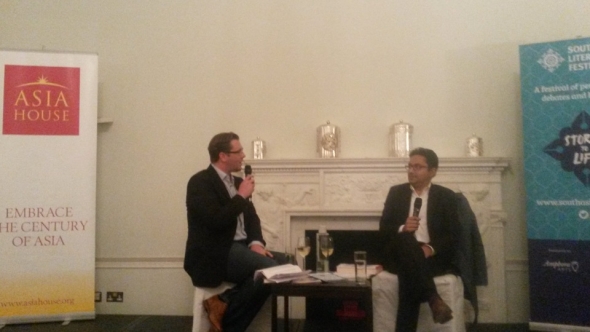 GROWING up in the 1980s in Britain was a fraught business, especially if you were brown or gay.

That much was clear from a talk at Asia House in London on Tuesday (October 22), entitled ‘Being on the Margins in contemporary Britain’.

Billed as pre-event to the South Asian Literature Festival (SALF), which opens on October 23, it was illuminating and funny. (See link below for  SALF competition ticket offer).

Writers Sathnam Sanghera and Damian Barr gave an intimate and revealing portrait of their formation as artists and how their respective communities have shaped their work and outlook.

Sanghera’s first novel, ‘Marriage Material’ has been widely praised for its comic and authentic depictions of working class Sikh life in a corner shop in Wolverhampton from the 1960s onwards. The novel follows on from his award-winning memoir, ‘The Boy with Top Knot’ (2009), which dealt movingly with his father’s mental illness and his mother holding the family together.

Barr’s book, ‘Maggie and Me’, is a humorous and poignant exploration of growing up in small-town Scotland amidst the savage cuts (to the steelworks at nearby Ravenscraig) and the ensuing social change inflicted by prime minister Margaret Thatcher.

Barr describes a sense of alienation and wanting to feel differently as the adults in his book took sides and reacted aggressively to Thatcherite policies.

“They were thinking what will it take to kill her and being adults there was a lot of swearing,” he said, explaining the backdrop to his memoir and his family’s reaction to the IRA bombing of 1984 of the Grand Hotel, which Thatcher survived.

For both writers, there was a sense of being invisible and not really understood by the wider world around them.

Sanghera said most white people’s first contact with Asians was through a corner shop.

“I wanted to take a cliché and humanise it. All great literature takes the specific and makes it universal.”

Revealingly, Barr referred in his book to the ‘Pakis’, which was the generic name for his local corner shop.

It was only when a lawyer read his book prior to publication that he was alerted to its offensive nature.

“Language is important,” Barr said. “I wouldn’t use it now.”

Their discussions revealed just how close being Asian and gay could be and that for gay Asians, there was still a level of subterfuge about their existence.

Barr, who lives in Brighton, recently gave a talk at Smethwick Library in the West Midlands, and said it felt like being in another world.

“There was only about one person and his dog,” he said, discounting the people he knew there. “Then suddenly about a dozen Asian people came in – I had to stop and ask them, ‘Was the bus late?’ They said they had been in the library and didn’t want other people to know and couldn’t be seen going.”

Sanghera described how most forms of social contact with women other than from your own family was frowned upon when he was growing up – and that he couldn’t be seen with a girl, without it being a subject of massive controversy and speculation.

He said attitudes were beginning to change but there were still some who either didn’t want to engage with the modern world or remained completely ignorant of it.

“It’s like being 1950s listening to the BBC Asian Network on their live phone-in programmes sometimes, but debate is improving. I still get Asians saying: ‘There are no gay Asians, we don’t have that ‘problem’.”

Both writers described how they came to be so, through good teachers, and forging careers in journalism before deciding to write more creatively.

Sanghera said his father had taken him to the library routinely, even though he himself could not read or write and that he had been the first person in his family to buy a book.

Barr revealed a touching story about the power of writing at the end. He had recently been contacted by a woman through Twitter, saying she thought her mother featured in his memoir.

“Though the woman has a different name in the book, it was her home I went to after school every day to avoid going home because it was so difficult. She showed me great kindness and generosity.”

The woman had not known she was in the book and had died very recently.

“They read a passage from my book at her funeral,” Barr said.