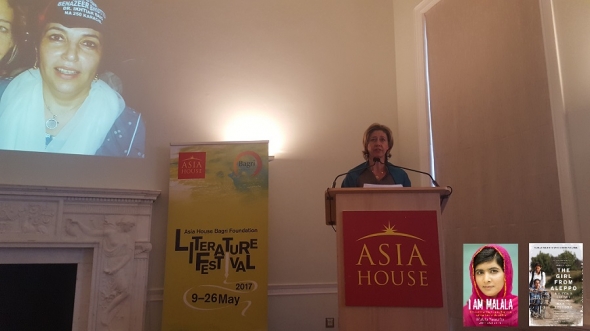 BATTLE-HARDENED journalist Christina Lamb vividly described the moments when she survived the bombing of an election campaign bus carrying Benazir Bhutto and went onto outline her life as a foreign correspondent covering war and conflict.

Lamb, who has been decorated many times for her reporting, talked about her experiences in Afghanistan and more recently covering the refugee crisis in the Mediterranean to a packed hall in central London at the opening of the Asia House Literature Festival, yesterday.

The Sunday Times chief foreign correspondent spoke personally about her friendship with Bhutto (first established when she worked for The Financial Times), her sadness that Afghanistan is almost always presented in a negative light with little attention to its rich culture and arts, and her fears that the West was continuing to repeat foreign policy mistakes.

It’s been reported that the US is considering bolstering its forces in Afghanistan as the Taliban insurgency against the government there intensifies.

Lamb said when she visited Kabul last month, she noticed a huge difference in security and appeared to be sceptical about the effectiveness of pouring more foreign troops into the embattled country.

“I was really shocked at how the security in Kabul had deteriorated. It has become a city of walls. I used to walk around on my own even at night,” she revealed.

Now she said even supermarkets and coffee shops had tight security with constant checks and gunmen on patrol.

She reminded her audience that the second largest number of refugees landing in Europe came from Afghanistan. As many as 200,000 have fled their homes in the South Asian country to resettle in the West recently.

However, the largest number remain Syrians fleeing the brutal civil war and Lamb read a moving passage from her latest book, ‘The Girl from Aleppo – Nujeen’s escape from Hell’.

She has co-authored the book which came out in hardback first as just ‘Nujeen’ – one girl’s incredible journey from war-torn Syria in a wheelchair’.

Nujeen Mustafa is a disabled Syrian who was largely kept indoors and away from the outside world because of her disability, even before the civil war erupted.

Almost miraculously, the teenager managed to board a refugee boat crossing the Mediterranean and Lamb recounts this remarkable individual’s life – she learnt everything from watching TV – in the book, which has just been released in a paperback version.

Earlier, Lamb spoke about how she got one of her first interviews with Benazir Bhutto when she was in London and reported the announcement of Pakistani woman leader’s wedding to Asif Ali Zardari in 1987. Lamb got her own personal wedding invitation after the interview. She was based in Peshawar, Pakistan for a couple of years and covered the conflict between the Soviets and various Mujahedeen factions at that time.

She also spoke briefly about groups which operated clandestinely when the Taliban wrested control of Afghanistan – including one’s women literature group that was publicly cited as the Golden Eagle Sewing School but actually smuggled the works of authors like James Joyce for the women to read.

In the post-talk Q&A, she lamented the way the country is mostly reported. She said Afghanistan had a rich heritage in the arts.

“There are people who love poetry,” she stressed.

She also spoke about her time with Malala Yousafzai, the Pakistani teenager who defied the bullets of the Taliban, is a Nobel Prize Peace winner (2014) and who Lamb also co-authored the best-selling book, ‘I am Malala’.

She spoke warmly about the teenager who has melted a billion hearts and more through her courageous struggle, but not it seems her brothers who claimed – ‘how can she win the Nobel Peace Prize when she always fights with us!’.

Lamb connected a thread linking Benazir to Malala and suggested that the two possess similar qualities and their battle lines overlap.

Asked by a woman about how difficult it was to maintain a relationship with her son, Lamb gently pointed out that few male foreign correspondents ever have to field such a question about their family responsibilities.

Nearer the start, Lamb described in chilling detail her experience of the bomb that claimed the lives of more than 130 people in October 2007 in Karachi – but from which Bhutto and Lamb both survived. The journalist described the huge excitement and elation felt by Bhutto’s supporters when she returned to Pakistan after exile, to fight the election.

Bhutto was only later assassinated in Rawalpindi on December 2007.

Lamb told Asia House about the first earlier attempt. She had been in a specially protected compartment on the lower level of the bus.

“There was a small blast followed by a much bigger blast – I was standing and told people to stay down (after the first)…and then there was silence and bodies lying everywhere.”

Later, she revealed that Channel 4 News had reported the assassination attempt and the bus bombing while it was broadcasting live and her husband and son both knew Lamb was on the bus – she had called them earlier in the day while on the bus.

“I did call someone to tell them I was ok and he thought – ‘why shouldn’t you be?’” – not realising Lamb had been covering Bhutto’s 2007 election campaign so closely.