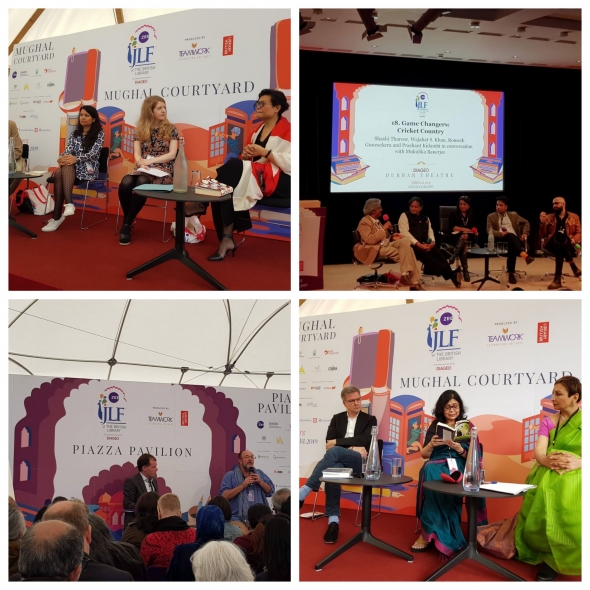 Everyone…eclectic and unpredictable, no one quite knows what happens when so many authors get together in one tent …

…whether it be cricket and opposing forces (only in manner of speaking of course,) such as India and Pakistan, as it does today in the World Cup Cricket – or the legacy of Queen Victoria, the role of novels and outsiders, or how Islam is more modern than is commonly given credit for in the West, there is always intelligence, inquiry and sometimes disagreement, but always politely delivered with a knowing smile.

Each session is like a cultural bomb – showering audiences in intellectual shrapnel and scattering thoughts and ideas across listeners who come to be challenged, enlightened, and even, entertained.

Everyone walks out of the tents and theatres bearing good scars and wounds, which will sustain them, not diminish or hurt them.

Where else but London then, for a Pakistani writer and commentator Wahajat S Khan to dream that India would be ruled by South Indians (only) – not looking in the direction of fellow panellist and South Indian MP and writer, Shashi Tharoor during the session Game Changer at the end of the second day of the ZEEJLF at the British Library.

Khan has just co-authored a memoir by Shahid Afridi, one of Pakistan’s most celebrated cricketers in recent times – called, ‘Game Changer’.

A Pathan, Afridi didn’t always fit easily into the Pakistani team which had its patrician elements – explained WS Khan.

Imran Khan, now prime minister, and for whom Afridi first played when he was captain of the Pakistani cricket team – was of Aitchison College and then Keble College, Oxford University.

“Afridi was a Pathan who came in the from the mountains,” revealed Khan emphasising the difference.

Author Prashant Kidambi had a different story to tell – that of (colonial) India’s very first cricket team that came to England in 1911.

“It was made up of Parsis, Muslims and two Dalits (the lowest class in the caste system),” he enthused. “Dalits have not played for India since.”

The colonial powers, at the time, worried that India beating England at cricket might give the natives’ ideas – and it was not until 1932 that a team returned from India to these shores.

Tharoor pointed out that in the early days of Pakistan, its rulers had seen cricket as a way of unifying their young nation and that politics and the military were never terribly far away.

“Musharraf also took charge of cricket,” he pointed out when the army general seized power in 2001.

Romesh Gunasekera was also there to fly the flag for Sri Lanka and read from his 2005 novel, ‘The Match’, which is about a Sri Lanka-India game at The Oval, where Sri Lanka succumbed to Australia yesterday in the same ICC World Cup which sees India and Pakistan do battle today.

Mukulika Banerjee, the veritable umpire-moderator made sure everyone played with a straight bat – even as Khan started to wonder whether the jingoism of Indian fans in the Bharat Army (inspired by England’s travelling support, known as the Barmy Army) – decked out with military khaki baseball hats and associations with the Indian Army – was just too overbearing and unpleasant.

“They threatened to go on strike if he accompanied Queen Victoria on her holiday to France,” said Basu, author of ‘Victoria and Abdul’ and the book from which the film of the same name starring Dame Judi Dench and Indian star, Faizal Ali, was adapted.

Basu said the Queen got her way by flying into a rage – depicted in the film – but borne out from Queen Victoria’s own Urdu diary, which Basu studied and said was a lot more revealing than her English language journals.

There was a deep friendship and a real sense of loyalty but romance – no, said Basu, in response to a question about Queen Victoria and her Scottish servant John Brown.

“She had a secret will, kept from her family and in that she said she wanted to be buried next to him and wearing a ring and holding a photograph of him – I think this was more than a friendship,” she teased.

The most startling revelation was that during Queen Victoria’s time – India was compliant, loyal and possibly even a bit infatuated, both Miles Taylor, author of ‘Empress of India’, and co-panellist stated, and Basu concurred.

“They compared her to Durga and Kali, Indian goddesses, and there were prayers, poetry and music in her name,” reported Basu.

The Words Are Only We Have Have Only session was similarly on the surface understated, but beneath, it positively brimmed with insight and fizz.

Lijia Zhang may not be the most famous Chinese origin novelist published in English – the language she writes in – even though she is self-taught and confessed she found writing sex scenes easier in her new tongue.

She said Chinese reminded her of her mother – and probably her mother. On her deathbed, there was a deep family secret that tumbled forth.

“She was a prostitute and met my father on the job,” she said laughingly.

He had taken her on as a sort of concubine – she told the audience she was thankful the Communists under Mao had decreed that a man could only have one wife.

“He chose my grandmother,” Lijia stated.

She thanked Gunasekera for helping her when she was a fledgling writer – he encouraged her to explore her story and at that time, she had thought about writing it as a memoir, but it became a fictionalised story that is contemporary in nature and deals very much with the new China, not the old. It is called ‘Lotus’ – the name of the ambitious sex worker from the village who is the central protagonist.

Anjali Joseph, Indian-born novelist, spoke of an itinerant existence as a writer between Mumbai, Assam and England. She learnt Assamese and it had informed her writing and perspective – they have a penchant in their literary culture and drama to be highly self-referential and it is a rich and ancient pool from which to draw, she said.

Christopher de Bellaigue was a journalist who was drawn into the post 9/11 debate and was curious about the idea of the need for an Islamic Englightenment – intellectuals such as Francis Fukuyama and Norman Lewis contended that Islam fuelled terrorism because it was backward and irrational.

De Bellaigue researched much of the Middle East of the 18th and 19th centuries, and found much, if not all of the Islam of the time to be highly curious, modern and sensibly rational. An argument emerged and it is in his book, ‘The Islamic Enlightenment: The Struggle Between Faith and Reason, 1798 to Modern Times’.

He ended his talk with William Dalrymple (The Islamic Enlightenment: Faith and Reason) on a poignant and powerful note. We can learn from Islam, he said.

“Go into any town (in Britain) and the A&E units are carnage on Saturday evening and Sunday morning – go to any place where there is a significant Muslim population (here) and it is as quiet as a grave.”