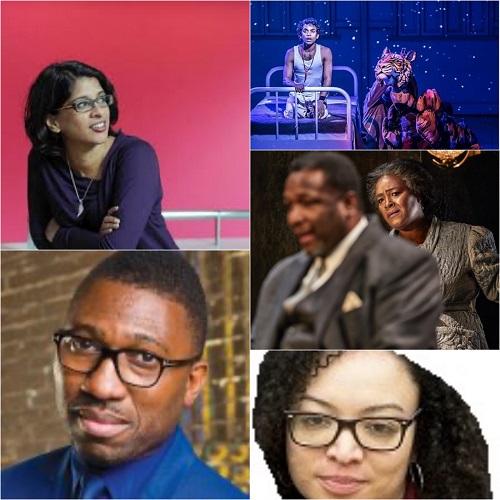 THIRTEEN figures from diverse backgrounds have been named in the top trade paper’s influential annual Stage 100.

The highest person of colour to appear on the Stage 100 is actor Sharon D Clarke who is listed at no.19 and just finished a run (January 6) as the character ‘Linda’ in the much-lauded production of ‘Death of a Salesman’ at the Piccadilly theatre.

Both her and co-star Wendell Pierce received rave reviews for their portrayal of the couple at the heart of American playwright Arthur Miller’s classic work. In this production, the family are black. It initially premiered at the Young Vic and then transferred to the West End. Clarke is the highest riser in 100 list, moving from 77. Acv reviewed the play.

Just below Pierce at no. 20 is Kwame Kwei-Armah, the artistic director of the Young Vic in Waterloo, London. He has been director there for just over a year and made his name initially as a playwright (with his ‘Elmina’s Kitchen’ transferring to the West end in 2005). Prior to his role at the Young Vic, he held positions in American theatre.

At no.31 is Indhu Rubasingham, the artistic director of The Kiln Theatre in Kilburn, London. She recently brought Indian playwright Anupama Chandrasekhar’s searing contemporary rape drama ‘When the Crows visit’. to the theatre and the production was widely acclaimed. She has had a string of successful productions mounted at The Kiln over the last year and is a powerful advocate of the need for change and diversity in theatre.

At no.44 is Nadia Fall, who has Indian heritage and is currently artistic director at the Theatre Royal Stratford East (TRSE) – she also has had strong year including casting Lenny Henry in August Wilson’s classic play about masculinity, 1980s economics and US black life in ‘King Hedley II’.

Fall also directs the current production of ‘Three Sisters’ at the National Theatre. This classic Chekov play has been adapted by Inua Ellams, one of the most exciting playwrights to have emerged in Britain recently. The Chekov play is transposed to the Nigeria of the 1960s.

Lynette Lynton took over the Bush Theatre after Younis Madani left for the Southbank Centre last year and has made a powerful impression with ground-breaking work. She is at no.48 on the list and a new entry. She co-directed the all-female cast women of colour at Shakespeare’s Globe’s production of ‘Richard II’ with Adjoa Andoh garnering huge praise both for her role in the lead part and co-directing. Lynton also brought US playwright Lynn Nottage’s ‘Sweat’ to Donmar Warehouse in London. ACV’s Suman Bhuchar named it as part of a trilogy of American plays that were among her cultural highlights of 2019.

At no.75 is playwright Lolita Chakrabarti – an award-winning playwright already, she added more accolades with the stage version of ‘Life of Pi ’ , adapted from the Booker Prize winning novel with the same title by Canadian author Yann Martel. At the centre of a drama is a boy from India and a tiger called ‘Richard Parker’. The play at Sheffield Theatres, follows a successful hit film adaptation by Ang Lee in 2012. The play transfers to the West End (Wyndhams) from June this year and is already selling fast. The play scooped four awards at the UK Theatre Awards last year – among them, best new play.

Just below Chakrabarti at no.76 is Simeilia Hodge-Dallaway. She founded the Artistic Directors of the Future (ADF) charity which champions diversity in theatre. The organisation has grown since its original inception in 2014. It has a leadership development programme and a theatre board shadowing initiative.

Julia Spencer is the director of the School of Acting at ArtsEd, which helps schoolchildren, sixth formers, undergraduates and postgrads, progress a possible career in the performing arts. It is strongly committed to diversity and improving under representation and runs its own school and sixth form.

Just one place below Spencer is Matthew Xia at no.82. He runs the Actors Touring Company. Of part Jamaican heritage, he has championed change and diversity and spoke at campaign group Act for Change’s conference in October.

Tarek Iskander is at no.86 and is artistic director of Battersea Arts Centre and among the productions planned for 2020 is well-known Iranian playwright Javaad Alipoor’s ‘Rich Kids: A History of Shopping Malls in Tehran’. He is a product of ADF’s leadership programme.

Daniel York Loh is an actor, writer and campaigner for East Asians – and played one of the key Chinese characters in Indian playwright Abhishek Majumdar’s Tibetan uprising drama, ‘Pah-La’ – which was staged at the Royal Court in spring of last year. Loh is no.90 on the list. Loh is on actors’ body, Equity’s Minority Ethnic Members Committee and has been vocal about representation issues for British East Asians.

Steven Kavuma is ranked at no.94 and set up the Diversity School Initiative. It was created to address under-representation of minorities in UK drama schools. It has partnered with several leading drama schools which have now pledged to a fair and equal recruitment process.

At no. 95 is Justin Audibert who is the artistic director of the Unicorn Theatre in London.

Appearing at 100 is playwright Jasmine Lee-Jones who made such a huge splash with the Royal Court drama ‘Seven Methods of Killing Kylie Jenner’ – which was showered with writing awards for Brenner. Milli Bhatia, a Royal Court trainee director and now literary associate there, told www.asianculturevulture.com the play was hugely original and one of the earliest works to both articulate and reflect on millennial sensibilities.

In the Stage 100 list, actor Sir Ian McKellen is reckoned to be the most powerful person working in British theatre today. Over the previous year, he celebrated his 80th birthday by visiting 80 theatre venues and putting on his one-man show – raising money for venues and theatre charities. In all, he is estimated to have raised four million pounds and the year ended with a run at the Harold Pinter Theatre in London’s West End.

You can read a certain number of articles for free but after that: http://www.thestage.co.uk/subscribe/

Privacy & Cookies: This site uses cookies. By continuing to use this website, you agree to their use.
To find out more, including how to control cookies, see here: Cookie Policy
← London Film Festival 2019: Shonali Bose director of ‘The Sky is Pink’ talks to acv (video interview coming), other upcoming films…
‘Jallikattu’ wild passions of men and beast, director Lijo Jose Pellissery and actor Santhy Balachandran talk about their film – London Film Festival 2019 →