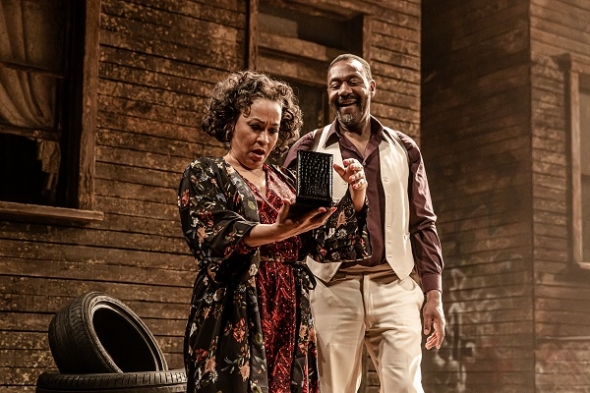 Brutalised and discriminated against – some will react in the way they have been conditioned to…?

ANY DRAMA by the great American (black) playwright August Wilson is an event in itself – more so when Sir Lenny Henry is in one of the leading roles.

‘King Hedley II’ is set in Pittsburgh in 1985, right in the middle of Ronald Reagan years – when trickle down economics was all the rage.

Crudely, its main contention was that if rich people did well – or the best – that wealth would find itself to poorer (black) folks too.

It was a time when the notion of enterprise and individual entrepreneurship first entered our everyday vocab.

Today, these ideas are widely understood by most people – by those with capital and crucially, those without it too.

‘King Hedley II’ is tough, but underscored by Wilson’s humanity, insight and wisdom; and while it may be a difficult watch on some levels, it takes us right into the heart of a small family and network of relationships that are cemented and torn apart to some degree by hard economics.

Playing now at the Theatre Royal Stratford East (TRSE), until June 15, it packs a punch and Nadia Fall, artistic director of TRSE, and director of this production, has assembled a powerful all-black cast to do justice to Wilson’s indictment of bruised masculinity, wounded pride and macho posturing.

‘Hedley’ (Aaron Pierre) has been released from prison and is trying to make his way by selling on a few refrigerators (knock-off or not is not explicitly articulated). His goal is to raise enough money to acquire a video store – there was one on every corner at that time – and trade was brisk.

Helping him with this task is ‘Mister’ (Dexter Flanders) and emerging somewhat later into the action is ‘Elmore’ (Lenny Henry, beautifully cast as the wise old trickster and dapper man about town).

The women are perhaps not central to this play in the way that the men are – even the character ‘Stool Pidgeon’ (Leo Wringer), a slightly batty old man, has pokes of insight to offer us and is an external narrator of sorts.

Hedley is passionate about starting over – having a family with ‘Tonya’ (Cherelle Skeete) and his little plantation in the dusty back yard of their house is something of a metaphor for growth from decay and bad roots.

Also in the picture and moving ever centrally to the dramatic conclusion is the relationship between Elmore and ‘Ruby’ (Martina Laird).

Each character’s back story is complex and not always easy to follow, but it might be fair to say all three main male characters are flawed, have served time and are comfortable in using violence to achieve a certain equilibrium life has denied them.

Wilson might say they are trying to do the right thing in the only way they know how… and that their ambitions are noble, even if their means to attain them are not morally acceptable.

In the law of the economic jungle (as the 1980s shaped up to be on both sides of the Atlantic), ‘you gotta to do what you gotta do’ – a line almost plucked from King Hedley’s bitter mouth.

What is most powerful perhaps is the sense that these men are victims of their time, circumstances and limited opportunity. They can see the world only in one way, having been wronged time and time again, they feel.

On one side you have Hedley, brooding, physically powerful and bitter about life and his place in it – and a man who might visibly exhale injustice as a horse does to the human eye on a frosty morning.

On the other you have Elmore, older, wiser, more attuned to ducking and diving and surviving – and in between is Mister, a passive figure in comparison.

Personally, Wilson offers no easy take-aways, but the legacy of oppression and centuries-old prejudice runs deep and cannot be overcome by just desiring to be a good citizen – somewhere ‘the system’ has to offer you hope and redemption – Wilson seems to be saying – and it maybe something hard economics – and it hardened considerably in the 1980s – simply cannot deliver.
Acv rating: **** (out of five)