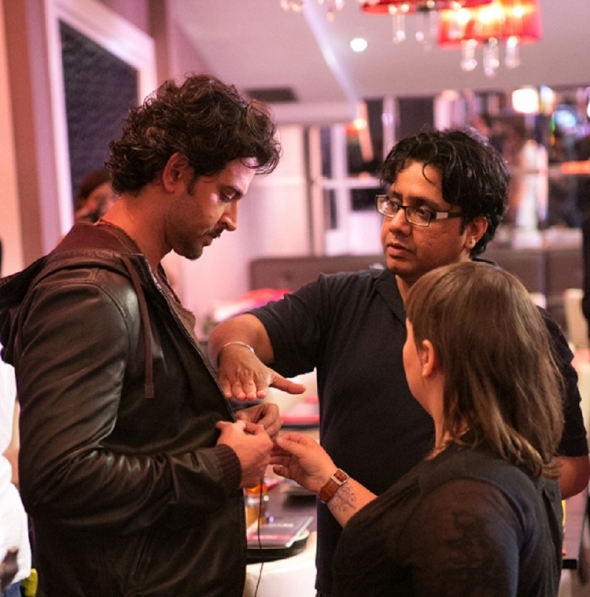 Cinema icon’s visit to UK was hush-hush, but can be revealed now…

BOLLYWOOD megastar Hrithik Roshan made a special trip to London ahead of his forthcoming Diwali blockbuster release ‘Krrish 3’, it can now be revealed.

The two-night, three-day, trip to the UK capital in August was kept tightly under wraps as the ad he came to shoot was the subject of a media blackout.

However, with the ad hitting the UK Asian TV channels this month on October 2, details of his visit can now be publicly disclosed.

Roshan (on left in picture) arrived in London with seven support staff to make a commercial for the popular wedding and restaurant venue, Chak89 in South London.

Looking after him was the responsibility of London-based film production company, Flame Visuals.

Led by creative director Sudipto Sarkar and business development manager, brother Sushanto, it was the second time the company has shot a Bollywood superstar, promoting the same venue.

The tight schedule and restricted publicity around Roshan’s recent visit was just another challenge – along with shooting one of the biggest Bollywood stars – Flame Visuals had to manage.

Roshan was booked to be at the banqueting facility for the shoot between 5pm and 12pm but ended staying a bit later.

Sudipto told www.asianculturevulture.com: “There was a lot of pressure but everything went well.

“Hrithik Roshan was amazing to work with – he was very professional and was involved in the script and the whole shooting and had a good understanding of what we were trying to do and the hi-tech equipment we used for the shoot.”

Flame Visuals had a crew of 30 and used Red Digital cameras, often used to shoot feature films and had a cast of a dozen actors and 150 extras to organise.

“We had a very professional set up, our director of photography is Mikolaj Jaroszewicz, who was the cinematographer on the Oscar-winning animated short, ‘Peter and the Wolf’ (2006) and our crew is made up of many different nationalities and is very talented.  I think Hrithik was very impressed with the set-up.”

Acting talent for the ad was sourced from the UK and among them was model turned actor Naresh Kumar, known as Naresh K.

He said it was one of the highlights of his career to have worked with Roshan.

“He was so friendly and easy-going and even gave me a hug – it was very inspiring.”

‘Krrish 3’ is to be released on November 1, ahead of Diwali on November 3.  The franchise has proved a massive hit and has opened the door for other Bollywood super-action hero films.

It is very rare for Bollywood stars to shoot commercials in the UK as the fees are usually prohibitive and few production companies have the requisite production experience to manage them.

The ad with Roshan runs alongside one of the most popular Asian TV programmes of the winter schedules, ‘Nach Baliye’ on Star Plus. This Indian show is a version of ‘The Strictly Come Dancing’ format but solely with celebrity-paired couples.

Having shot both Shah Rukh Khan and Hrithik Roshan, it is something of a professional coup for South London based Sudipto, who has made more than 100 commercials since setting up his company in 2006.

Among his other clients are Lycamobile, Savvy&Sand, Taj Jewels, Omega Travels and Laila Basmati.

Flame Visuals handles the marketing strategy for Chak89’s TV ads, and also acts as a media buying house, purchasing spots for some of its clients across all the ethnic TV channels in the UK.

As well as making commercials, Sudipto has made a number of short documentaries shown at festivals around the world and is currently working on bringing a debut feature with the working title, ‘Mirage’, to the big screen. Last year he made a short called ‘The Last Call’.