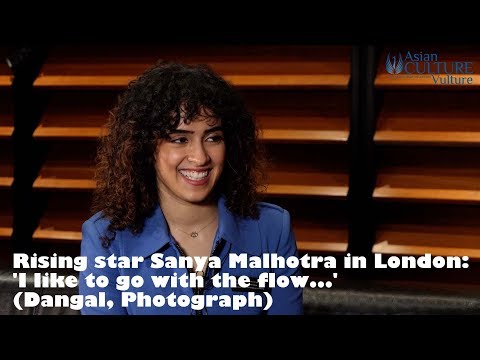 Rising star talks to acv about her career…

SHOOTING for the film ‘Shakuntala Devi‘, a biopic about the Indian woman maths genius, who lived in Britain for a time, Malhotra took time out to talk to acv editor Sailesh Ram about her career to date and how she navigated Bollywood without a star name or contacts to lean on when she started out…

Rising star Sanya Malhotra spoke to us (in London) about her film career to date – how she imagined she would break into Bollywood – and what really happened, her experience of ‘Dangal’ with Aamir Khan and making ‘Photograph’ with director Ritesh Batra.
There is an interview we conducted with both on the red carpet for the world premiere of ‘Photograph’ at the Sundance Film Festival earlier this year. It is on our Twitter feed #photograph
Malhotra was in London for the making of the forthcoming ‘Shakuntala Devi’ film (2020). A video of her speaking about this film will be published nearer the time of release.

First published on Youtube on November 7 2019 and the interview was conducted at Sony Studios in central London on October 8 2019.