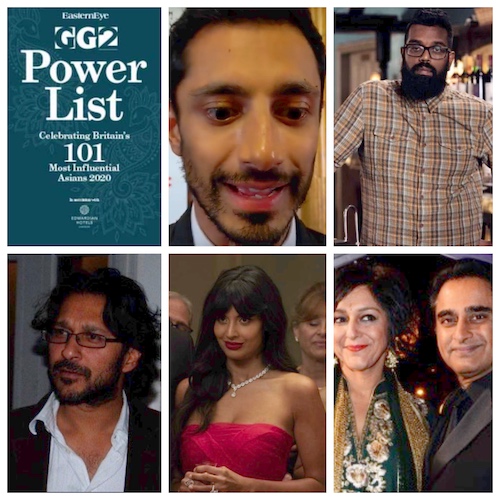 JUST over a third of the country’s most powerful Asians work in the arts and media sector, according to editors who compile an annual index of those who wield the greatest influence.

The ‘GG2 Power List’ 2020, profiles 101 of the most powerful figures of South Asian heritage in Britain today.

Published by the country’s largest Asian-owned publishing house, the Asian Media Group, (AMG) it is now in its ninth edition.

Ramniklal Solanki, CBE and AMG editor-in-chief, states in his introduction : “They (the entries) are an eclectic mix of talent whose influence permeates through all aspects of British life.”

The highest arts entry is Riz Ahmed at no.8.

Wembley-born Ahmed is widely being tipped to be nominated next year in the best actor category for his lead role in the film, ‘Sound of Metal’.

About an eponymous American heavy metal drummer losing his hearing, Ahmed gives the film depth and power. The feature enjoyed its world premiere with Ahmed and first time narrative feature director Darius Marder and British co-star and girlfriend in the film, Olivia Cooke, all in attendance, at the Toronto International Film Festival (TIFF) in September.

The film was snapped up by Amazon shortly after it screened in Canada. ACV talked to Ahmed and Marder about their film on the red carpet in Toronto.

‘Sound of Metal’ is expected to be given a theatrical (cinema) release so that it can be eligible for big screen awards in 2020.

Next along, and at no.15, is the only out and out comedian on the list – Romesh Ranganathan is almost the (brown) face of British comedy on BBC TV at the moment.

The former Maths teacher has enjoyed a meteoric rise from pub spots to prime-time TV and his own comedy-cum-travel programme (‘The Misadventures of Romesh Raganathan’ on BBC2) and sitcom (‘The Reluctant Landlord’ on Sky 1) in a span of just seven years.

Just one place down from Raganathan, is Jameela Jamil, the former Channel 4 and BBC Radio 1 DJ has become a major stateside figure, battling the likes of Khloé Kardashian on her Instagram posts.

She took issue with the reality TV star for encouraging dieting and making money out of many women’s misery, countering it with her own campaign, I Weigh – created to stop women feeling bad about themselves and their body image. Jamil wrote about her campaign in the issue of Vogue, guest edited by Meghan Markle, the Duchess of Sussex.

Jamil has reinvented herself as an actress in the US, and has a lead part in the comedy, ‘The Good Place’, a quirky comedy drama about people who have died and should have gone to straight to hell, but are given a shot at redemption and heaven, with some help in the angelic character form of the white-haired Ted Danson (once of ‘Cheers’ fame).

At no.20 and a new entry this year is one of British radio’s most powerful figures – Mohit Bakaya is Radio 4 Controller. He was appointed in July 2019 to head up the corporation’s flagship heavyweight talk-based radio station.

Winner of the top award of the Hammer in AMG’s accompanying GG2 Leadership Awards, compere and BBC5Live presenter, Nihal Arthanayake, (no. 48 on the ‘GG2 Power List’) remarked it was quite the achievement to become the top bod at a BBC radio station, and qualified it by joking – he wasn’t going to get any brownie points or extra work for drawing attention to that.

Just below Bakaya is Meera Syal and Sanjeev Bhaskar (entered as a couple and occupying a single position, no. 21). They have been a perennial entry since the first ‘GG2 Power List’ in 2011.

Anyone who has seen ‘Yesterday’ – the Richard Curtis scripted romantic comedy about a young musician being the only person on the planet to remember the songs of the Beatles, cannot failed to have been but charmed by Syal and Bhaskar playing hero Jack Malik’s (Himmesh Patel) parents.

But there’s a lot more to Syal and Bhasker than just the odd high profile cameo – both continue to work across media and genres – generally disproving the notion that the only successful Asians are bankers, lawyers, accountants or even politicians or political figures!

There are five of those in the top ten – behind Javid are Priti Patel (home secretary), Gina Miller (activist), Sadiq Khan (Mayor of London), while Ruchi Sunak (chief secretary to the Treasury) occupies no.7 on the list.

The other arts and broadcasting figures on the list are – Naomi Scott (no.27 and another new entry this year); she is about to be seen in the rebooted and latest film version of ‘Charlie’s Angels’, having smashed it as Princess Jasmine in Disney’s global summer blockbuster hit, ‘Aladdin’; Sir Anish Kapoor, is the the only out and out artist (29) and the only strictly arts personality to feature on AMG’s sister ‘Asian Rich List’ (profiling the country’s 101 richest Asians in Britain); star interviewer on BBC’s Radio 4’s ‘Today‘ programme, Mishal Husain (30); Mahmud and Umar Kamani (36), fashion moguls who run companies, Boohoo and Pretty Little Thing, respectively, and also feature as a family in the ‘Asian Rich List‘.

TV Bafta-holding Adeel Akhtar has a shocking story to tell of mistaken identity and then success (37); and also on the list is the star of the forthcoming Dickens adaptation, ‘The Personal History of David Copperfield’, Dev Patel (40); global pop star and pin-up, Zayn Malik (41); Channel 4’ s redoubtable presenter and tormentor of Hollywood star director Quentin Tarantino, Krishnan Guru-Murthy (44).

The ‘GG2 Power List‘ was released on October 10 2019, and distributed free to guests attending the GG2 Leadership Awards. The publication can be purchased from AMG, please contact Saurin Shah – subs@gg2.net.

AMG produces top-selling nationwide title Eastern Eye and started with Garavi Gujarat and the English, GG2. It began publishing in 1967 and now has offices in the US, and India.

More on the winners of the GG2 Leadership Awards 2019: https://www.gg2leadershipawards.co.uk/winners2019.php

Sailesh Ram, the editor of www.asianculturevulture.com is also a contributing editor to AMG and was editor of Eastern Eye 2009-2012.