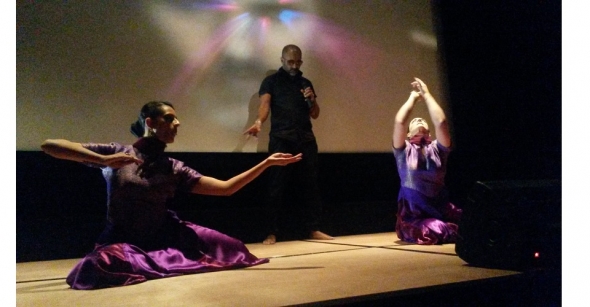 IT’S NOT OFTEN you get the opportunity to enjoy some Bollywood dance, stirring tabla sounds, innovative kathak combined with contemporary rap and learn the art of meditation with a Buddhist monk – all in one day.

But this was precisely the range of activities www.asianculturevulture.com was exposed to at ‘An Indian Summer’, on Sunday (June 29) in Leicester’s cultural quarter.

A six-day multi-arts festival, which closed on Sunday, it has much to recommend it – with many activities and attractions free of charge.

There was a huge array of acts, and whether it was dance or music, traditional or modern, professional or amateur, there was plenty to keep you entertained, amused and enthralled, and if this alone wasn’t enough, there was shopping, laughter yoga meditation and special talks to name just a few of the other points of possible interest.

One of the highlights of the festival was “Tabla with a difference v4” on Sunday at the Phoenix Cinema.

Played to a theatre with not a spare seat in the house, An Indian Summer festival favourite Mayur Narvekar (an original performer from the first four years ago) joined Hiren Chate in a lively, energetic tabla opening, before giving way to the live link-up with other tabla talent Robin Sukhadia.

In a skype link-up Sukhadia based in Los Angeles, gave the audience an insight and a basic history of one of the most bewitching musical instruments to come out of the subcontinent.

Music with tabla has a different kind of beat altogether suggested Sukhadia and that rhythm is represented by the beat of our own hearts.

It’s a shame that Sukhadia himself did not play or join Narvekar and Chate in a live rendition but the technical logistics probably militated against it.

Making full use of the multi-media components at his disposal and the cinema screen was spoken word poet Shane Solanki.

The sense of performance was ever heightened by the contributions of the enigmatic Kathak dancers and their occasional verbal utterances and repetitive musings.

It was original and innovative and composed freshly – in just around two days, revealed Solanki.

It has great appeal and its energy and allure could be all the more enhanced, if it were to be conducted outside, perhaps, at dusk high on a hill, or some other such point of physical note, but again logistically that might be difficult to organise.

Tehnically supported by Terry Mardi, (the man behind Desi Circus, whose acts were largely performing through the day and keeping the crowds entertained at the Phonenix), this particular performance incorporating rap and Kathak is worth experiencing or searching out.

Earlier crowds had gathered at Orton Square to enjoy a slightly damp but nevertheless colourful and messy Holi.

Away from the main attractions, there was the shopping area/bazaar with food stalls dotted also around along a street closed off to traffic (Southampton Street) with a real auto-rickshaw ferrying festivalgoers between different points.

For those who wanted something perhaps calmer and more personal, through the day, there were sessions on yoga, laughter yoga and Buddhist meditation.

Bollywood dancers at the Phoenix

Bollywood dancers at the Phoenix

Cleansing away the negative, and focusing on well-being and staying positive, was indeed a high point till a mobile phone went off and yet more brilliant still – when the monk smiled and chose to forgive this culprit! (We were collectively coming to the end of the session.)

A festivalgoer lets the rickshaw take the strain

For the closing event, Rishii Chowdhury and Bobba Cass joined forces in what was clearly going to be a mix of music and spoken word performances, as they and a very decent crowd (in all senses) colonised the basement of The Exchange Bar.

With a longish journey back to the bird’s nest in the capital, there wasn’t time enough to enjoy this in full and so we said goodbye and farewell to a fine day at ‘An Indian Summer Festival’.
Sailesh Ram