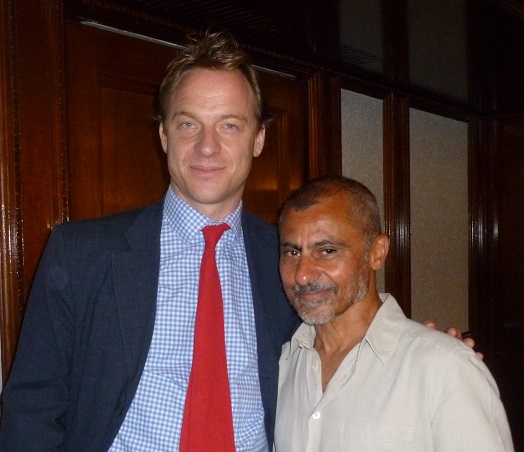 Journalist delves deep to find country changing and much infected

INDIAN cricket is a law unto itself – ask anyone of the game’s administrators from other countries and they’ll be quick to agree or at least smile knowingly and not say either way (as diplomats do).

The controversial (well, much since the Ashes 2013) Decision Review System (DRS) is favoured by all countries, except, you guessed it…

In June another scandal erupted, with a senior figure from the Board of Control for Cricket in India being questioned about a spot fixing and betting scandal with several players from the Indian Premier League (IPL) cricket right in the frame. Cricketers have now been charged and have denied any wrongdoing.

Journalist James Astill (pictured left) has written a book called ‘The Great Tamasha’ linking cricket, corruption all with the turbulent rise of modern India. It was written some time before the current furore and was largely compiled when Astill was stationed there as South Asia Bureau Chief for ‘The Economist’ between 2007-2010, but he also enjoyed stints with other media organisations and has covered Pakistan and Afghanistan too.

An award-winning journalist and one who professes an affection for India, he isn’t writing simply to knock the country, or cricket there, or both. That’s easy.

Both on and off the field, there’s a lot wrong with Indian cricket but like many of the deepest issues in sport, when a team’s winning – ‘it ain’t broke and you don’t need to fix it’.

ACV was in India at the time just after the most recent scandal broke and there was a certain recognisable glee among the media, which, like any other, enjoys a good old rumpus. There were even voices that were claiming the IPL would dissolve under the weight of the scandal.

A few months on that doesn’t seem very likely and Astill agreed when we asked about it at a launch do for the Indian media in the UK in July.

India won The Champions Trophy beating England on home soil and then secured a victory in a round-robin tournament against Sri Lanka and hosts West Indies and have continued to win.  There. What’s wrong with Indian cricket, asks the fervent fan??

Astill’s central point is that the India is changing – and that those changes are inevitably impacting on cricket and corruption is merely a symptom of that.  It’s both an argument and a journey for someone from the outside who gets to look in and inspect very closely.

Over the years the primacy of cricket as a sport in India has waned, especially as a spectator sport, football, especially English Premier League football on TV is vastly popular  and among the young urban elite perhaps more so, because it more convincingly connects to a truly global culture (where the US loses out on both counts).

Astill admitted as an English journalist and one that worked for ‘The Economist’, he had an easier time of getting to talk to Indian politicians and those who mattered (it’s easier to share thoughts with an outsider and his/her audience) than Indians themselves. Some of that has spilled neatly into this book.

Most surprising is Astill’s account of the one-day cricket match between India and Pakistan in early 2004 which took place in Karachi, arguably as Astill points out, Pakistan’s most lawless and violent city.

Read with appropriate aplomb by the brilliant actor Vincent Ebrahim, (pictured right, and very impressive in ‘The Empress’ by Tanika Gupta at the RSC in May and one time Dad to Sanjay in the Beeb’s ‘The Kumars at No.42’), at the London Indian media launch, the sense of occasion and surprise at that match really came to life.

India won a thrilling match and were cheered by the home crowd just as enthusiastically as it did for its own. Astill sensed something, though it later transpired that politically all the goodwill amounted to very little.

For any student of Indian cricket or even India itself, there’s more than a useful commentary here, for anyone interested in both and an outsider’s view, this book cannot come with a higher recommendation.