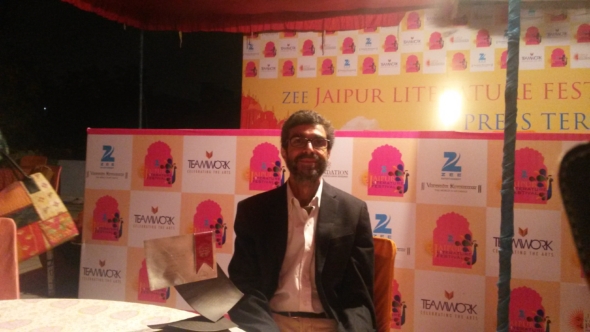 PRIZE-WINNING author Cyrus Mistry told www.asianculturevulture.com his book, “Chronicle of a Corpse Bearer”, which scooped the $50,000 DSC South Asian Literature Prize yesterday, is more of a love story than a rumination on dying Parsi culture.

Mistry, of Parsi origin himself, was presented the award by feminist icon Gloria Steinem and John Ralston Saul, the international president of writers organisation PEN, at the Jaipur Literature Festival.

The ceremony was hosted by Bollywood star and ex-bond villain Kabir Bedi, who added a further touch of glamour and gravitas to proceedings.

The 57-year-old Mistry, who divides his time between Mumbai and the southern hill resort of Kodaikanal, had “penned a beautiful, poetic book”, said jury chair Antara Dev Sen, a prominent Indian journalist and columnist.

His second and now prize-winning novel, deals with a transgressive love affair between the son of a high priest and the daughter of a Khandhia (corpse bearer) in Mumbai (or Bombay as it was then) in the 1940s.

The Khandias were a group of people tasked by the Parsi community to take care of dead bodies and were looked down upon and considered impure and seen by many as ‘untouchables’.

Parsis have very distinct rituals around death, and are well-known in India for their ‘Towers of Silence’, where bodies were traditionally left to the mercy of vultures.

“It’s a very serious love affair and I have tried to ask questions which are universal about morality, good and evil, justice,” Mistry told ACV in an interview before he knew he had won the award.

He said following his first book, “The Radiance of Ashes” (2005), he wanted to do something that was “microscopic”, almost miniature in comparison.

He revealed that the book had actually been prompted by research he had done for a UK Channel 4 documentary about Parsi corpse bearers and was based loosely on a true story recounted to him at the time.

However, the programme had never been commissioned.

“It struck me as something I could write about 20 years later.”

The award will offer the father of an adult son in Canada a level of financial security he has been recently seeking. He is also slightly frail, following a largely successful battle with Multiple Sclerosis 20 years ago.

“I’ve been doing some part-time copywriting to make ends meet and I was employed by a friend of mine who believes in my writing,” he told www.asianculturevulture.com

He isn’t the only one now – five other prominent judges, including Rosie Boycott, former editor of Britain’s “Independent” and founder of feminist magazine, ‘Spare Rib’; Arsha Sattar, translator and writer; Ameena Saiyid, managing director of Oxford University Press, Pakistan; and Paul Yamazakihas, a prominent US bookseller, and community arts director, have validated his talent. Boycott was the only one of the six judges not to be present in Jaipur for the presentation.

Mistry trumped over five other writers. These included, “Book of Destruction”by Anand, and translated into English from the Malayalam by Chetena Sachidanandan; “Goat Days“, by Benyamin, translated into English from Malayalam by Joseph Koyippalli; Mohsin Hamid for How to Get Filthy Rich in Rising Asia; Nadeem Aslam, “The Blind Man’s Garden“, and debutant Nayomi Munaweera for Island of a Thousand Mirrors. Hamid was the only writer not there in person to give a reading to the large audience that had gathered to witness the presentation ceremony.

There had been an original submission of around 70 entries from publishers and these had been whittled down to a long list of 15 before the shortlist of six had been announced in London in November.

The DSC South Asian Literature Prize is not just open to writers from South Asia or South Asian origin, it is open to any writer who deals with South Asia as a region and compromises a cluster of ten nations.

DSC is a multi-national, multi-million Indian infrastructure company. It was the founder sponsor of the Jaipur Literature Festival and funded it for five years. Company chief HS Narula and wife Surina continue to patronise the arts and presented the shortlisted authors and translators with a plaque each.