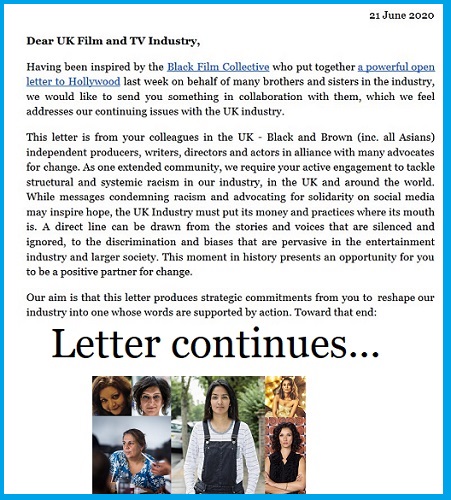 A GROWING list of actors and powerful decision-makers are backing an open letter organised by UK-based Asian creatives drawing attention to issues of discrimination and representation and calling for significant change in their industry.

The Asian and Black actors, writers and producers are backing calls for the industry to seize the moment – in the wake of Black Lives Matter movement and similar letters written by black creatives in the US – and make positive changes throughout the sector.

The letter was organised in just three days and put together by ‘The Boy with the Top Knot’ producer Nisha Parti, and actors Meera Syal and Indira Varma, playwright Tanika Gupta, actor-director Pooja Ghai and TV presenter Anita Rani. At the last count there were almost 5,000 signatures as the working day drew to a close in the UK.

Published yesterday, the open letter is signed by directors, Gurinder Chadha, and Asif Kapadia, and other actors and creatives including Himesh Patel, Michaela Coel, Noel Clarke, David Harewood and Gugu-Mbatha-Raw – to name just a few. You can read the full list of signatories from this morning and others being added to it (in real-time), by clicking on the links in the letter pdf link below and scroll to the bottom.

Among those from outside the Asian and Black community backing the calls for change are Colin Firth, Ben Whishaw, Ralph Fiennes, Samantha Morton, Bill Nighy, Vicky McClure and Stephen Graham, Sandi Toksvig, and Sue Perkins and Jed Mercurio, writer and executive producer ‘Line of Duty’ and ‘The Bodyguard’, Jane Featherstone, executive producer of ‘Chernobyl’, and Ollie Madden creative director of Channel 4.

Only five per cent of the producers supported by the British Film Institute (BFI) in 2018/19 were producers of colour, it’s been reported.

“Our aim is that this letter produces strategic commitments from you to reshape our industry into one whose words are supported by action,” states the letter.

It also then set outs four areas of concern and issues to address – “Banish Your Weak Excuses; Empower Black and Brown independent producers; Expand Your Vision and Be More Demanding.”

Parti, who was unavailable for comment today, said the support from outside the community, was “unexpected” and she hoped they would “become active allies in bringing about change”.

You can read the letter in full here –

The BFI told www.asianculturevulture.com this afternoon, it will produce the latest up-to-date diversity figures over the next few days and Ben Roberts, chief executive, wrote a letter, published on June 17, outlining issues and possible remedies. (see link below).

In a separate development unrelated to the letter, the BBC announced today (June 22) it would invest £100m on diverse productions and talent. From April 2021, all new network commissions will have a 20 per cent mandatory diverse talent target. The new initiative has the backing of outgoing Director-General Tony Hall, and June Sarpong, director of creative diversity at the BBC since November 2019. Charlotte Moore, director of content, said that during the making of ‘Small Axe‘ a new anthology of short films directed by Oscar-winner Steve McQueen, he had challenged her and the BBC “to set meaningful targets and take proper action”. She called today’s announcement, “a truly transformational commitment to both on and off screen representation”. For more see what the BBC says about this initiative called ‘Right The Script’, see here https://www.bbc.co.uk/mediacentre/latestnews/2020/creative-diversity-commitment

Last week, 700 Black, Asian and Minority Ethnic TV workers wrote an open letter to Oliver Dowden, UK minister of digital, culture, media and sport, as well as all the major UK TV channels, saying that they needed to pay urgent attention to racial equality and stating there was a problem with representation and diversity in TV, and executives could no longer ignore calls for meaningful change.

Privacy & Cookies: This site uses cookies. By continuing to use this website, you agree to their use.
To find out more, including how to control cookies, see here: Cookie Policy
← Top Bollywood director Sabbir Khan: “The industry is going through a ‘correction phase’ and everything will be all right,” he tells acv…
Amjad Ali Khan and sons Amaan and Ayaan to play together at Prom 45 this Sunday (August 21)… →