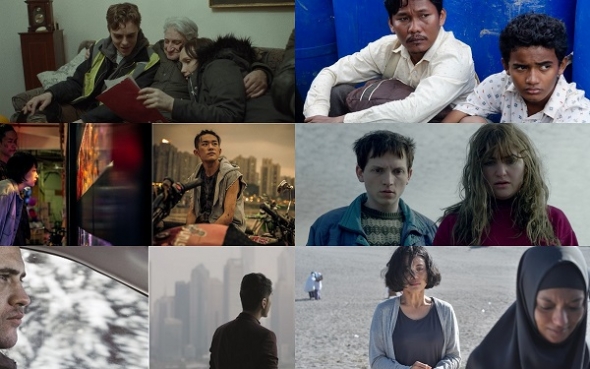 Watch out for these films as they come to the UK…

Give Me Liberty (Kirill Mikhanovsky)

THAT this ended up winning the International Competition Jury Best Film and the $60,000 prize money was both not a surprise and a significant nod of reassurance for this critic.
Told with tremendous gusto, American Russian director Kirill Mikhanovsky’s tale is a joy to behold. It isn’t always pretty but then it isn’t meant to be. It’s not an out and out comedy as some bill it, but comedy drama at its finest.
‘Vic’ (Chris Galust) is a driver helping disabled folks get around in coldest Milwaukee – he also has a grandfather who hails from Russia with dementia – the pair live in an assisted type of living apartment with other Russian Jewish emigres.
Vic is hard pressed as it is, but when a group of his grandfather’s contemporaries want to attend a funeral for one of their group, he reluctantly acquiesces to give them all a ‘quick’ lift. At the same time, a mysterious ‘Dima’ (Maksim Stoyanov) turns up and says it is his aunt who has just passed away.
Nearly two hours later, you’ve laughed, cried and seen America in all its shining and messy glory. There is a real positive energy and one could describe it as a road movie of sorts and one that reminds you powerfully that the best case for diversity is not political argument, but people mucking in, helping each other and trying to understand another in the process – and it is both funny, sad and wildly enjoyable. Go see it when it comes to the UK! It premiered in Sundance but has had 30 minutes cut from it since then reportedly and is represented by Wild Bunch, a top global sales agent.
Acv rating: **** (out of five)

HARROWING and unforgettable, this is a hard watch that depicts the brutal world of modern slavery and trafficking via the Thai fishing industry. Sarm Hang, who plays the lead character, 14-year-old ‘Chakra’, rightly won the top male actor award at IFFAM.
It’s on his slender shoulders that the film rests and he gives an authentic and vivid performance of a boy who becomes a man through his painful ordeal. Slightly fed up working for an oppressive father, he and a friend decide to leave Cambodia and find a better life for themselves in Thailand. They are exploited and abused and end up on a fishing boat – and that is where their troubles truly begin. Powerful, this film, produced by Screen Australia, and made and written by Rodd Rathjen, is a tough watch but it’s is immensely rewarding in opening your eyes to the horrors, degradation and immense cruelty involved – and above all it is a tale of survival and dedicated to those who escaped to tell such tales. It premiered in Berlin and should be seen widely – it is estimated some 200,000 boys and men are forcibly working in the $6bn Thai trawler fishing industry.
Acv rating: ****

SET in a small coastal unnamed town in Argentina, this is a strange one. A brother Lucas (Tomas Wicz) and sister Gilda (Laila Maltz) tale by director Mateo Bendesky that defies easy description or obvious interpretation – and that maybe the point.
Lucas and Gilda come to a house used by her recently deceased mother and lover. He has fled (with nothing more than debts) – the house is eerily empty and there is some sense of something sinister having happened there – though it is never explained and the police have long completed their inquiries. In the notes, it says their mother committed suicide, but you don’t necessarily divine that from the film. Lucas’ bizarre solo conversations on the beach could be comic but suggest some form of mental evasion and disturbance.
Both characters seem wholly uncertain of themselves and it is a coming of age tale – the unexpected gay twist gives the film some spark – but it is too dependent on atmosphere and oddball characterisation to get beyond the sum of its parts.
Acv rating: **½

THIS appeared in the New Chinese Cinema strand at IFFAM.
It’s quite the ride, melodramatic and involving, it’s about bullying and emotional abuse of young people.
Director Derek Kwok-cheung Tsang is Hong-Kong born and a University of Toronto graduate and is well-known in China and has been feted with awards previously (‘Soul Mate’ 2016) and this film has been adapted from a novel by Jiu Yue Xi – ‘Young and beautiful’.
Zhou Dongyu playing ‘Chen Nian’ is certainly this – but her elfin stature and difficult family circumstances – she is raised by a single mother whose employment status is somewhat dubious – or at least it is to the other pupils who hound her mercilessly – make life very tough for this tender soul.
Bright and academic, she starts to withdraw but finds an unlikely ally in orphaned street punk, ‘Bei’ (played by Jackson Yee who made his name with a band, TF Boys). Dongyu won a best actress award at IFFAM.
Battling against the odds Chen has to put her life back together after a serious accident – the two also become embroiled in a police investigation for a serial rapist; the incidents are linked. Gorgeous urban cinematography (by female DOP Yu Jing Pin) and with two strong performances at the core and a thriller aspect to proceedings, you can see why this had the impact it did.
Acv rating: ***

THIS Indonesian feature is ostensibly about a couple who get caught up in a fatal road traffic accident during their ‘homecoming’ in the run-up to Eid celebrations in this country – but the film opens up into something actually more interesting and surprising…the widow uses the sorry episode to launch her own bid for freedom and take her lover and child with her!
The main couple in question are having marital issues and so the widow’s freedom lurch dependent on ‘Aida’ (Putri Ayuda) and husband (Ibnu Jamil) throws further light on an already fraught and delicate situation.
How this tale evolves is part of the interest and it is clear the director Adriyanto Dewo wants to take the audience on a journey of discovery. Very watchable if a little light on Aida and hubbie and introducing a particular slant to the widow’s character, played by Asmara Abigail, one of the Vareity Asian Stars Up Next group, alongside Bhumi Pednekar.
Acv rating: ***

ODD BUT IT MAY WELL make more sense a second time around or even a third. Knowing next to nothing about this film except the director’s illustrious credentials as an ad filmmaker, Argentine Juan Cabral’s first feature intrigued enough but it might have helped to know a bit more.
We have two seemingly unconnected characters living very different lives – Canadian ‘Kaden’ (Boyd Holbrook) is a big hulk of a man and is chasing an Olympic dream – to represent his country at the ripe of age 30+ as a daredevil ski jumper. There’s some romance thrown in too and it could make for a fairly conventional film about one man’s journey on the way to his dream. In fact, for a good half of the film this is what it is.
The other segment involves ‘Khai’ (Song Yang), a high-rising business executive based in Shanghai and definitely leading the high life. A little arrogant and insulated, he has his own challenges and issues. Cabral certainly brings his keen eye both to the wilds of Vancouver in mid-winter and Shanghai at night. Khai too has a slightly bumpy love life – a woman he sees on a dodgy revenge ex-lovers’ internet site starts working in the same office. That the two men have a direct and unusual connection is not apparent till the final quarter. You either warm to this theme or find it slightly irritating (especially if you do not know anything much about the film).
Cabral is definitely one to watch – there are some great ideas here and the cinematography as you would expect is of a high order – what it lacked was emotional empathy, especially towards Khai who seems arrogant and conceited. Contrastingly, Kaden is a decent sort of fellow trying to make his presence on the world count in an exacting sport.
Acv rating: ** (* for ideas and a daring narrative)