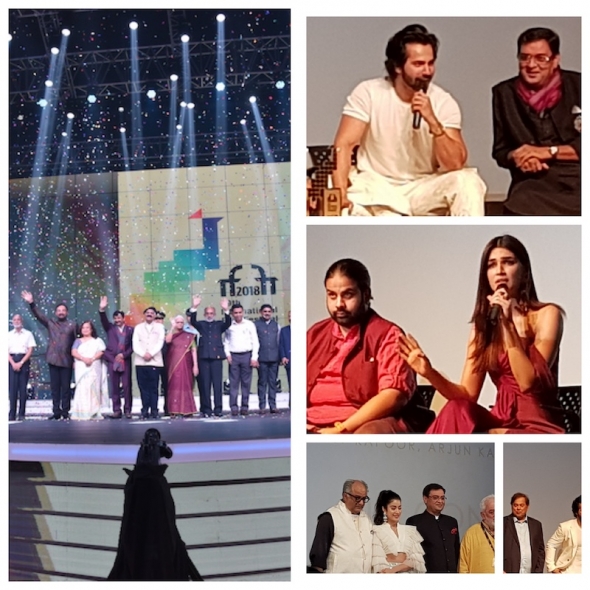 A very vibrant film culture from the serious to the utterly frivolous and much in between – and some of the biggest movie stars on the planet, does the International Film Festival of India (IFFI) reflect all this??

INDIA’S most prominent international film festival handed its top prize, the Golden Peacock to Ukrainian filmmaker Sergei Loznitsa for his film, ‘Donbass’, on Wednesday night (November 28), bringing the curtain down on the International Film Festival of India.

The prize consists of cash amounting to Rs40 Lakhs (Four million Rupees, nearly £45,000/$58,000), awarded to the director and the producer of the film.

‘Donbass’, which had its world premiere in Cannes this year, and won in its Un Certain Regard section, has collected a clutch of awards around the world and now adds the prestigious, Golden Peacock to its garlands.

Set in regional Eastern Ukraine amidst war and conflict, it poses profound questions about truth, falsehood and power.

In IFFI’s official press release, the film was described as “not just a tale of one region or a political system; it is about a world lost in post-truth and fake identities”.

The Silver Peacock, the next award down and handed to the best director in the competition category went to Lijo Jose Pellisery, the director of the film, ‘Ee.Ma.Yau’.

In this Malayalam film, a son based in a small coastal village in Kerala, sets about giving his father a commendable funeral, but is met at almost every turn by an obstacle of some sort. The Sliver Peack consists of a cash prize of Rs15 Lakhs (1.5 million Rupees, nearly £17,000/£21,500).

This year’s best actor prize went to Chemban Vinod for his role in ‘Ee. Ma.Yau’ as the son trying to seek a fitting and dignified send off for his father.

Ukraine scored big in the Best Actor (female) award category too, with Anastasiia Pustovit taking the accolade for her work in ‘When the trees fall’. Her prize also consists of a cash element, with Rs15 Lakhs going to her too.

Salim Khan, son of Arbaaz, receives the lifetime achievement award on his behalf…

A special Jury award went to Milko Lazarov for ‘Aga’.

This is a tough tale about an elderly couple who brave the harsh winters to survive in Yakutia, north eastern Russia. It garnerned a Silver Peacock and the same cash award.

Praveen Morchhale won the ICFT-Unesco Gandhi Medal, for ‘Walking with the Wind’, organised by the International Council for Film, Television and Audiovisual Communication, Paris and UNESCO.

Tender and insightful, acv saw the film at another Indian festival last year; and the film given this award reflect UNESCO’s values of human rights, intercultural dialogue, promotion and safeguard of diversity of cultural expression.

Set in an isolated community in the Himalayas, our eponymous 10-year-old boy breaks a chair at his school accidentally and vows to find a replacement – but it is nowhere as easy as it sounds and a long trek shows the pressures such communities face. Beautifully shot, and understated, the film is poignant and memorable.

The Portuguese-Spanish ‘Los Silencios’ directed by Beatriz Seigner got a special mention in this category.

The actor and writer was among a group of individuals who heralded in a new age of Indian cinema in the 1970s, introducing audiences to the masala western.

This was our first International Film Festival of India and it proved to be an enjoyable and rewarding experience, mostly.

After all, this is India and not everything runs to plan. But as always there are huge compensations.

Some folks don’t like the Bollywood element but it can’t and shouldn’t be ignored. There is a way of covering popular Indian cinema which shouldn’t be overly sycophantic and oleaginous but intelligent, respectful and critical, where appropriate.

Times are a changing here, both as a country and cinema culture – the world has got smaller and Indian cinema reflects this. There is still a buzz and excitement when some of India’s stars open themselves to scrutiny and public attention – as The Kapoors, Kriti Sanon and Varun Dhawan and Dad, all did.

The Sanon-Adil Hussain chat was probably the best and not just because it was in almost all in English, but the contrast of Bollywood and an actor, who is serious about his craft and offers only very rare forays into Indian commerical films these days, was fascinating and revealing.

Even Varun Dhawan opened up about ambitions and how he came into the film world – how much of it he had disclosed before was hard to assess but he was not frightened about talking about the pressures and stresses and revealed he had seen a psychiatrist after his first film.

The Kapoors’ talk was understandably emotional at times but again there was much to ponder and reflect on how we best serve the memory of a woman who gave a lot and still had someting further to give – as Boney her widower husband suggested, the best may have yet to come.

Elsewhere on our interview trail, it was tremendous to get an opportunity to listen to Shoojit Sircar, who is definitely doing something different within mainstream Indian cinema.

We call him a Bollywood maverick and our interview shows that he has gained insights from the great masters, many of whom are not as well loved as they might be, because they don’t or didn’t subscribe to formulas which make films successful here.

It was also great to catch time with Ivan Ayr, the director and writer behind ‘Soni’, which had its world premiere in Venice and featured again in London, where we saw it.

His film came out a response to the Delhi rape case of 2012. He was attending Film Bazaar, which is the trade part of IFFI and located in the stunning beachside Marriott Hotel, Panjim.

More precipitous than that is perhaps Hari Viswanath’s ‘Monitor’, a short film, it is inspired by a real sexual harrassment case shows the stresses and strains some young women face have to face every day.

The director picked up on the #MeToo stories here and said he wants the film to be rallying call for women to be heard and action taken against people abuse their position with sexual motives.

Our friend, Samir Bhamra who is the artistic director of the UK Asian Film Festival (March 29-April 7) kindly gave us his time to talk to us about what excited him about Film Bazaar this year and how he relaxes amid the pressures that go with picking films we can all enjoy this Spring in the festival.

Finally, and talking about winding down and taking time out, perhaps we could interest you in the Lakshawadeep Islands, off Kerala… Imthias Mohammed, one of the islands’ tourism directors was there not just pushing the coral islands to filmmakers but telling us it really is worth a visit…

Next stop for those of you interested in our journey is the International Festival and Awards Macau (IFFAM) – where Nicolas Cage, Shekhar Kapur and Tillotame Shome will be present, among many, many others and where we are guests of the festival itself.

Privacy & Cookies: This site uses cookies. By continuing to use this website, you agree to their use.
To find out more, including how to control cookies, see here: Cookie Policy
← UK Asian Film Festival 2019: ‘Evening Shadows’ (review) – Parents take centre stage in coming out drama…
UK Asian Film Festival 2019: Struggle not submission – Southall Black Sisters 40 years and drawing the dots between then and now… →