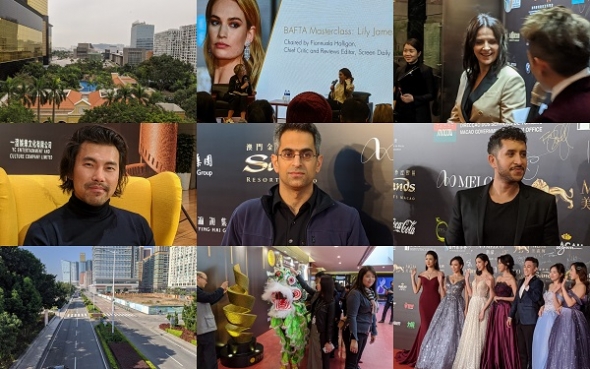 History, culture, and a cute festival that has a lot going for it …

MACAU is a fascinating place – if you can get away from the casinos and the ubiquitous five-star hotels and luxury malls (some of which are in these hotels).

While these are very comfortable and impressive in their own right, there is a blandness and uniformity about them that doesn’t necessarily excite the seasoned traveller.

There is culture – there are great shows (we didn’t get to the water palace one but heard fab reports) and some of Macau’s history you will find in the old part of town and talk to people (even if you can only communicate with them in basic English; Portuguese or Cantonese/Mandarin being better of course), you will understand this is a melting pot – ruled by the Portuguese (between 1557-1999), it was a trading post and many ethnicities and nationalities mixed and mingled and made it what it is today.

It has the same status as Hong Kong but appears to have escaped unrest – the reasons for this are complex, but there are more Chinese (from China) and political culture is very different and it really is a holiday island. It is a free and friendly place and feels like being in the West (though the huge roads being right-hand drive always gets me!).

Most of the media hoopla came towards the end of the fest – with Lily James, Juliette Binoche and Variety’s Asian Stars Up Next cohort arriving on the last day and the other two on December 8 and 9, respectively.

IFFAM ran from December 5-10 and the intervening week (between the end of IFFI and start of IFFAM) was spent in India, in prep and working on non-film stories.

The fourth IFFAM was also our second – and we sort of knew what to expect.

It’s a great little festival – there are only 50 films screening – IFFI had more than 200! And so, it’s a chance to catch up and meet some new folks and watch some films (some you missed like Terrence Malick’s ‘A Hidden Life’, which premiered at Cannes this year) and talk to some filmmakers who are beginning to make a mark globally.

London-based Richie Mehta is an established filmmaker and we last talked to him at the Sundance Film Festival (in the US, in January), where his epic ‘Delhi Crime’ enjoyed its world premiere.

At IFFAM, he served on the shorts jury and spoke to us about his latest project which is a film centred around a real incident he experienced when he was in mainland China a few years ago attending another film festival.

A Chinese woman with excellent English befriended him and persuaded him to have tea at her shop – what Mehta did not realise was that the whole encounter was created to extract money from him. He told us he didn’t lose a lot, but the experience gave him an idea for a film. It hasn’t got a proper title, but is simply known, for now, as the China tea film and he is in pre-production for it.

Another director you are sure to be hearing a lot more about is Fyzal Boulifa.

The Leicester-raised filmmaker of Moroccan origin brought his debut feature, ‘Lynn + Lucy’ to the festival. It won two awards in the international competition section – Best Director and Best Female Actor for ‘Lynn’ – Roxanne Scrimshaw in her debut role.

It’s an absorbing – and at times very uncomfortable – watch, dealing with a very difficult subject matter – an unnatural child death.

Boulifa told acv it was loosely ‘inspired’ by a real-life tale in Bristol.
The film explores a distinctly tight-knit working-class community – Lynn works at a local hairdressers and has a young family of her own and she and Lucy have been friends since their schooldays.

In many ways, it’s an exacting study of (female) friendship and how one incident can turn everything…everything upside down and just as you might expect – there is a late eveal which Boulifa, told us, is deliberately ambiguous.

Produced by BBC Films, and currently doing the festival circuit, Boulifa is a talent – he won two separate awards for two different short films he presented at Cannes at Directors Fortnight – IFFAM programmer and (Screen Chief Critic) Fionnuala Halligan said the feat, she believed, was “unprecedented”.

Boulifa certainly has a bright future ahead of him and you won’t forget watching ‘Lynn and Lucy’ very quickly, if at all…

As always, there is a chance for acv to engage with New Chinese Cinema – the other main features competition strand.

While we were only able to see ‘Better Days’ and ‘To Live to Sing’ – there is no doubt Chinese cinema is a potent force both at home and with the Chinese diaspora.

We were hugely impressed by ‘To Live to Sing’ – Chinese-Canadian Johnny Ma’s latest feature.

About the decline of traditional Chinese Opera and centred around a struggling troupe in mainland China – its matriarch and her niece – the film is powerful and beautiful and both characters are very memorable and must have run Zhou Dongyu (‘Better Days’) winner of Best Actress in this section, very hard. They are not professional actresses but opera singers themselves and Ma first came to make this imaginativ feature after he was commissioned to make a documentary about the troupe.

‘To Live to Sing’ premiered in Cannes at Directors Fortnight and Ma talked to us, in Macao, about its making and how he hopes the film will help to draw light on a dying art form and how it might be revived…through film now?

Until then, Merry Christmas and a Happy New Year!

Reviews of other IFFAM 4 films here – read about our favourite film at IFFAM and award-winner ‘Give Me Liberty’.
See all IFFAM Award winners on the same page above
More on IFFAM 2019 http://asianculturevulture.com/?s=IFFAM

Privacy & Cookies: This site uses cookies. By continuing to use this website, you agree to their use.
To find out more, including how to control cookies, see here: Cookie Policy
← Sundance 2021: Indian success for documentary about all women media team in ‘Writing with Fire’; Riz Ahmed ‘Flee’ also wins award; ‘Fire in the Mountains’ world premiere…(wrap and links)
Sundance 2021 – Amy Tan: Unintended Memoir; Cusp; First Date…(reviews) →