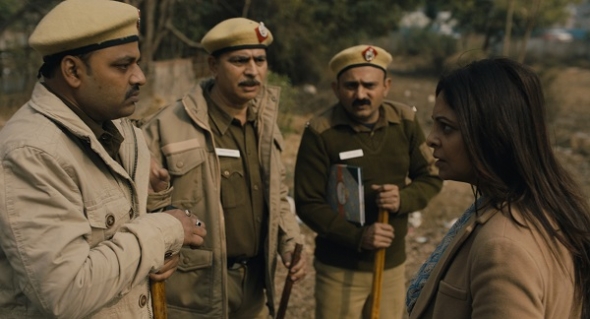 Let us rephrase that – it became one of the most horrendous and upsetting crimes ever reported – and news of it quickly crossed the globe, causing widespread revulsion and anger.

Men and women in India took to the streets of the capital – Delhi was gripped by riots and many demanded change.

Now for the very first time, a filmmaker brings you the inside story of the Delhi rape case and how the perpetrators were brought to book.

In ‘Delhi Crime’ which dropped onto Netflix, a few days ago, you can see the investigation that followed and the impact the case had on the many people close to it.

This is in the best traditions of ‘procedurals’ (crime investigation dramas), we are familiar with on TV in the West.

A drama (based on actual events), it is fast-paced after an initial scene-setting, and is a compelling TV series based on real events and tells a story of courage, determination and hope.

Made by London-based, Canadian-raised Richie Mehta, it enjoyed a world premiere at the Sundance Film Festival in January and acv saw the first two episodes of the full seven episodes there. It had been sold to Netflix just before it screened in Sundance.

Mehta met the parents of the ‘Jyoti’ – who was raped on a private bus in Delhi by a gang of men and left for dead on the side of the road with her traumatised male companion, who was also physically set upon with a metal rod by the same assailants.

Mehta had privileged access to records of the investigation and that also led him to personalities close to the case – all through Neeraj Kumar, a former Commissioner of Delhi Police and with whom he had social contact with through cousins who lived in Delhi.

“It was almost handed to me on a platter,” revealed Mehta talking to acv just after the screening at Sundance.

“And I thought why not? And started writing – it was dealing with themes in my other work (‘Amal’, ‘Siddharth’) and I felt some good could come from it.”

Mehta met the family of Jyoti – the girl who died from her injuries days after the brutal attack.

“It was very important. It wasn’t just a question that this story had to be told, we explained to the family exactly what we were doing in extreme detail.

“And they said if you can produce something positive from our daughter’s death, then you have our blessing, go for it.”

The early drama is very involving – we get behind the character’s lives, perhaps in a way that has not been commonly portrayed of police personnel in India.

At one point, the power goes down in a local police station and all investigation has to cease; the forensic team only turns up promptly, because an experienced cop pulls a favour and says he knows how the system works; in another scene, we see one of the main frontline cops lives in a very modest home and has to rely on public transport to get around – which also has its limitations (at 2am, when the hunt is on)…

“People will see the issues – how can we expect them to do a great job? They sometimes have to do 36-hour and 48-hour shifts,” Mehta explained.

Mehta feels this is the first time you get to see the Indian police’s story.

“They told me, ‘nobody’s ever come and said we want to show it from our point of view and show what we (the police) face’,” Mehta pointed out.

High-up in the force and appalled by the sheer brutality of the rape, she vows the killers must be apprehended.

Chaturvedi knows it is a losing battle in some ways – her own adult daughter wants to study in the US and says emphatically, India and Delhi, especially, is no place for an independent woman who wants to live life on her own terms.

After the screening in Sundance, Shah told acv: “All of us were affected by what had happened in 2012.

“I related to Chaturvedi absolutely. She is a woman who stands up and says ‘I am going to get justice. I am going to do this for her (Jyoti) and everyone else’.

“I have tremendous respect for her, it was definitely an eye-opener.”

Rasika Dugal plays a young cop who is drafted in specially by Chaturvedi to be the family liaison officer (the Indian police do not have such positions like the Metropolitan Police in London) when Jyoti is in the Delhi hospital – she was subsequently transferred to Singapore for life-saving treatment but died there.

Dugal plays a woman cop not long out of training and keen to impress. She spoke to real women police officers for her role.

“They’re very idealistic and excited about their work. My character is in awe of Chaturvedi and will do anything for her.

“She spends a lot of time in hospital with parents and the girl up close and that is a very hard experience. It’s about survival and most of the other characters have resolutions with the catching of the perpetrators.”

She doesn’t say it, but it’s obvious that there are deeper problems and that Dugal’s character can only do so much as a single woman officer.

Review
WHAT director Richie Mehta does so well is to provide a veritable cast of police characters to follow and sympathise. The crime is so horrible and awful, you are willing the cops to succeed at all costs (and through legal means only) and at every step. And they did – whatever it was, they caught the men behind this appalling crime – and the rapist murderers were convicted and jailed relatively quickly.
The actors really pull you in – especially Shefali Shah as Vartika Chaturvedi, and Rasika Dugal, as the young woman recruit trying to find her identity in a new job and under extremely rare and trying circumstances. In some ways, this has some echoes with another Netflix offering – ‘Soni’ – a film which screened at London Film Festival last year and became available on Netflix this year. It looks at the predicament of a very idealistic and committed young woman trainee officer.
Directed by Ivan Ayr, he too was churned by the Delhi rape case and wanted to look at how women in the force itself could bring about change. Both these dramas are captivating and open up the lives of policemen and women like you’ve never seen before – and form a larger narrative about Indian women taking control and affecting change, both personal and political. It is very inspiring in its own way and gives hope that one day India will emerge a far better place for women, full stop.
ACV rating:**** (out of five).

Privacy & Cookies: This site uses cookies. By continuing to use this website, you agree to their use.
To find out more, including how to control cookies, see here: Cookie Policy
← Adil Hussain – ‘Pareeksha’ and more international work on the horizon and to appear in new Star Trek series 2020 …(video) IFFI 50
Hellaro opens Indian Panorama section at IFFI 50, set to come to London November 29… (video) →