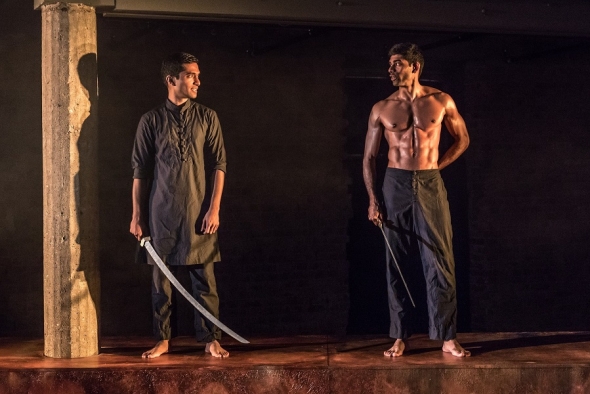 BOLD, philosophical in a visceral sense and awkward viewing at times – ‘Guards at the Taj’ is a meaty slab of theatre that’s hard to forget. Quite simply and literally, it is about two guards at the Taj. And more.
Written by Pulitzer nominated American playwright Rajiv Joseph, it packs a punch or should that be cuts through meat like an extremely sharp cleaver.
Humayun and Babur have an unenviable job in that it isn’t just about guarding the most beautiful building in the world – which they are not allowed to turn around and witness.

Set in 1648 as the building nears completion, the play is about protecting a legacy and a fulfilling a royal vision that is unsparing and exacting.
Brilliantly played by Danny Ashok and Darren Kuppan, it’s a work that asks critical questions (about us all), but in a way that can seem casual and almost banal at times – and has the accompanying moments of levity to ease the considerable tension (that you want from fine theatre).
It isn’t for the faint-hearted and Ashok kindly took time out to answer a few questions about the play that is directed by Jamie Lloyd, who is widely recognised as one of the young talents shaking up the theatre world today.

www.asianculturevulture.com (ACV): It is in many ways a profound play, asking some of the deepest questions about ourselves. How do you react to that as an actor?

Danny Ashok (DA): ‘Guards at the Taj’ is incredibly profound, you’re right, but my approach is not to try and invoke a feeling of profoundness for the audience. Whether it is profound or not is up to them to decide. My approach is always to tap into the humanity of the character first and foremost. Rajiv Joseph has written a wonderfully complex story that is superbly layered and thus, for me, as long as I tell the story of my character and his relationships, everything else falls into place quite naturally.

(ACV): It’s a very bare set, very brilliant for this play – the incredible contrast and having to imagine the beauty of the Taj in the background, but it is also quite grisly and both characters are ‘exposed’ mentally and physically – one quite literally…

DA: The simplistic vision of the set by Soutra Gilmour is something I love. It says so much by doing very little and allows the audience to tap into their own imagination too. The stripped back nature of the show allows the story to be at the forefront, the relationship of the two characters shines through without any distractions.

ACV: What’s it like working with Jamie Lloyd, who is unquestionably of one the leading lights of theatre? Has he given you something extra? Or revealed something about you in an acting sense you didn’t know about before?

DA: Jamie is amazing to work with; it’s been such a learning process working with him and was certainly one of many reasons as to why I wanted to do this play in the first place. One of the main things I’ll take away from this experience working with Jamie is to simply trust my gut instincts; sometimes that’s the best direction you can take your character in; Jamie is someone who encouraged that with both myself and Darren and I think it shows in the best of ways in the play.

ACV: Have you been to the Taj Mahal? Do you know much about the history of the time and the setting? How would you describe ‘Guards at the Taj’ to someone who just innocently asks, what’s it about?

DA: I’ve never been to the Taj personally, at one point during rehearsals, Jamie did joke about possibly taking a trip to see the Taj- purely for research purposes of course(!) but unfortunately it didn’t happen in the end. But it’s certainly on the list of things I wish to see. In terms of the history of the time and setting; much of the information we needed was provided to us by Rajiv Joseph who was there for our first week of rehearsals. How would I describe ‘Guards at the Taj’ to someone who knew nothing about it? I wouldn’t, I would simply tell them to come watch the show at The Bush Theatre where we are running until May 20th!

ACV: It’s a very intense play and must use a lot of physical and mental energy – how do you cope with that as a person? Do you find it easy or difficult to switch off?

DA: I tend to find that doing any theatre show provides me with a great amount of adrenaline that continues long after the performance has finished; so sleeping when I should isn’t always an easy task at the moment. Switching in and out of character is easy, but that adrenaline isn’t quite so easy to turn off. It’s certainly the most intense play I’ve done so far but it’s a gift for an actor to take such a part on, so gratitude tends to override any feeling of exhaustion!

ACV: What are you doing workwise afterwards?

DA:I’ll be returning for the BBC Radio 4 series ‘Tumanbay‘, which is back for its second series. So you can hear me in that!

ACV: You were recently the star of a rare British Asian film, ‘Finding Fatimah’, do you feel there enough roles for British Asian actors? Are things changing (enough)? Do you prefer film to theatre?

DA: It would be great to have more roles for Asian actors that didn’t just fall into a stereotype, that was one of the main reasons I wanted to take on ‘Finding Fatimah’ in the first place; it was a character that didn’t depend on a negative stereotype that we commonly see portrayed on TV and Film. Things are changing, albeit at a slow pace, and actors like Dev Patel and Riz Ahmed are making huge strides that will hopefully benefit all Asian actors eventually. I do love both TV and theatre, who knows, maybe once I do more film work I might lean more towards that, but I’ve done more theatre work in my career so far and do love the buzz of performing for an audience, so for now, theatre might just be at the top.

ACV: Finally, what about that incredible six-pack Darren is carrying? It could well be a work of art in its own right…at least for some folks…

DA: As for the scene you’re asking about and Darren’s six-pack, a lesser man might be intimidated by such a thing, I was more interested in telling the story about the characters in what is an incredibly tender moment between the two.

This is the first fully-fledged play production to be staged at the Bush Theatre since its year-long £4.3million redevelopment. The theatre once based above a pub in 2011 has now been transformed into one of the leading dramatic spaces outside of the West End, and gives renewed creative energy to Shepherd’s Bush Green and West London.
As well as allowing a 50 per cent increase in productions, the new space will enable a wider and more diverse set of voices to be heard with the new studio becoming a home for emerging artists, and three diverse theatre groups based there will have more of an opportunity to develop their work. There will also be £10,000 bursaries for creatives from minority backgrounds and more from the theatre’s Emerging Writers’ Group.
All this accords with the expanded vision of The Bush’s artistic director Madani Younis who has been in the post since 2012.

All pictures except The Bush exterior, Marc Brenner

Bush theatreGuards at the Taj

Privacy & Cookies: This site uses cookies. By continuing to use this website, you agree to their use.
To find out more, including how to control cookies, see here: Cookie Policy
← TIFF 2020 Wrap: ‘The Disciple’ wins another film festival award, director Mira Nair says ‘A Suitable Boy’ character ‘Lata’ (Tanya Maniktala) represents ‘young India’, and ‘One Night in Miami’ festival award…
‘Shut Up Sona!’ and Tannishtha Chatterjee’s ‘Roam Rome Mein’ and other films come to UK cinemas as part of London Indian Film Festival (LIFF) physical screenings… →