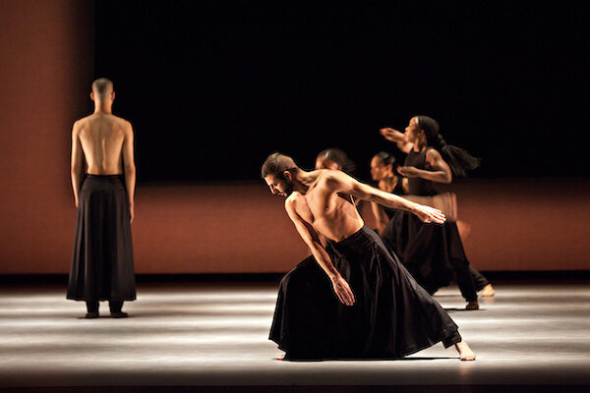 CHOREOGRAPHER Akram Khan’s four-night revival of his much acclaimed ‘Kaash’- meaning ‘if only’- 20 years since it was originally performed – is one not to miss, with its themes of destruction and time at the centre of the show.

As a first-time watcher of Akram Khan’s work, it was hard to know what to expect in the vast space that is the Royal Festival Hall at the Southbank Centre on Thursday (April 21).

Confronted with the back of a male dancer at the beginning of the performance, the stage was combined with a sparse backdrop designed by the world famous artist Anish Kapoor.

An intense black rectangle hung ominously behind and, at one point created the illusion that it was moving, and this was all rather unsettling when combined with the climax of Nitin Sawhney’s percussion score. Rushing wind, chanting voices and other unusual sounds gave the impression that the dancers were exposed to the elements.

Mixing traditional Indian Kathak (for which Khan trained and become a famed exponent before moving more into choreography) with contemporary dance, all five performers had their own solo moments, but each one was – unusually – done in silence. (See the dancers creduts below).

What seemed like a technical glitch with the lack of music quickly became apparent that it was entirely deliberate.

The first solo dancer’s jerky, ravaged movements must have lasted for at least five minutes, and the atmosphere was tense as the audience hung on every movement. Not comfortable to watch, but perhaps that was the intention? The silence was certainly not easy to forget after the four solos that proceeded, but was impressive all the same.

There are no further planned performances of ‘Kaash’ (Revival), but it is such an iconic work that it is bound to return to theatres somewhere at some point. It played April 20-23 this time around at the Southbank Centre. The dancers who appeared in this run are Sadé Alleyne, Sarah Cerneaux, Sung Hoon Kim, Nicola Monaco, and Jasper Narvaez.

This was the last performance in a series of events marking Shankar 100 – a number of different occasion performances to mark the great Indian maestro Ravi Shankar’s 100th birthday anniversary. Panditji, or Guruji, as he is known among those who knew him well, first played at the Royal Festival Hall in 1954 and he has a long association with the event space. Daughter Anoushka Shankar, an extremely accomplished sitar player herself, curated events as a Southbank Associate Artist.

Originally scheduled for March 2020 and postponed twice because of the covid pandemic, it still has one element to run.

An exhibition called ‘Indian Sun: Highlights from the Ravi Shankar Archive’ remains open until Sunday May 15, at the Royal Festival Hall. The exhibition includes rare exhibits of some of the key moments in Shankar’s life, and is curated by his biographer Oliver Craske. There are also short films and a paper installation too from the Imagine Children’s Festival workshop which was part of the centenrary celebrations as well.

www.asianculturevulture.com covered the centrepiece Shankar 100 concert at the Southbank Centre (see review below) which took place on March 5 with musicians Anoushka Shankar, Nitin Sawhney, Dhani Harrison and jazz guitarist John McLaughlin, honouring his memory with a unique ensemble towards the end.

Acv has also just covered Akram Khan’s latest work at its world premiere, ‘Jungle Book Reimagined’, was performed in The Curve, Leicester on April 7 and is a retelling of Rudyard Kipling’s story of Mowgli, but fast-forwarded to a more modern version; the world is suffering from the effects of climate change and Mowgli- now a young girl – and her mother, try to escape the rising tides. It is heady mixture of live animation, theatre and dance. And has been critically acclaimed. There are two more performances of the show in the UK, in Birmingham on Friday (April 29) and Saturday (April 30), before it goes on tour around the world.