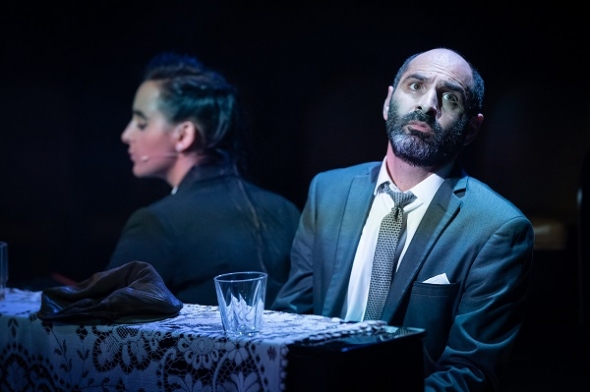 Freewheeling musical has its merits but tries too hard to impress…

The inaugural production to open the first season at the new Boulevard Theatre in Soho London has ticked off every possible ingredient in its mission to impress; but quantity rarely out does quality.

A fast-paced clever production, it centres on four actors who play ghostly spirits.

The foursome share tales of love and loss, some of which intertwine into the same plot while others detract.

In the programme Malloy says that that the story is ‘deliberately confusing and deliberately told in a non-linear way’ but while some theatregoers may consider this to be an achievement to me it felt a tad pretentious.

There was a level of ‘intellect’ required to make sense of the story and not being able to make head or tale of it made me lose interest.

I wanted to enjoy the show, I wanted to be entertained and I wanted to love it as much as I love the pretty pink interiors of the theatre café but there was just too much going on.

Let’s start with the set.

It’s charming and resembles an attic filled with antique-like trunks and a telescope.

Add to that some moving props, throw in some humour, drop in an eerie atmosphere, break the 4th wall by regularly speaking to the audience, invite them onto stage, ply them with whisky, mix up the soundscape to feel like a random playlist of genres comprising folk, cabaret and jazz, stir it up with some haunting storytelling and for the final touches add a cast of four hugely talented performers.

‘Wait. That’s still not enough. Instead of a regular musical, let’s transform a 90-minute play into a double vinyl album and rather than scenes, lets have songs and announce their name, album side and track number every time’ – that seems to be how the production has been actually conceived.

Half way through the show I contemplated walking out. It just got too repetitive and though the lyrics were telling, the timing of every line precise and the energy created by the cast of musical theatre genius’s utterly electric, I just wanted it to calm down, in the same way that I wouldn’t want to sit on a rollercoaster for more than a few minutes.

Having such an intensely paced piece without an interval is a tough ask, even when there are rewards.

These merits can be attributed to the actors, all of who will make you feel like you’re witnessing something special and you are.

Maimuna Memom’s vocal abilities are flawless as she effortlessly moves between genders, ages and genres, Zubin Varia takes on a narrator style role embodying the nostalgia of a Cockney pianist in an East End pub while Carly Bawden’s haunting solos and Niccolo Curradi’s instrumentals are the reason you should watch this.

However, less is more and 23 continuous songs that aren’t balanced out by narrative is overkill.

‘Ghost Quartet’ is a bit Marmite but it will have far more lovers than haters and any one who feels drained by the testing nature of the watch will still absolutely adore the joyful surprise ending, which was my favourite bit.

www.asianculturevulture.com saw ‘Ghost Quarter’ on its press nights at October 31 2019 at the Boulevard Theatre.

*This is the Boulevard Theatre’s first show and is a refurbished space next to the Raymond Revue Bar. It was previously a small theatre in the 1980s and hosted Peter Richardson’s Comic Strip, which launched the careers of Adrian Edmondson, Dawn French, Jennifer Saunders, Rik Mayall and Alexei Sayle, among others, in the 1980s.