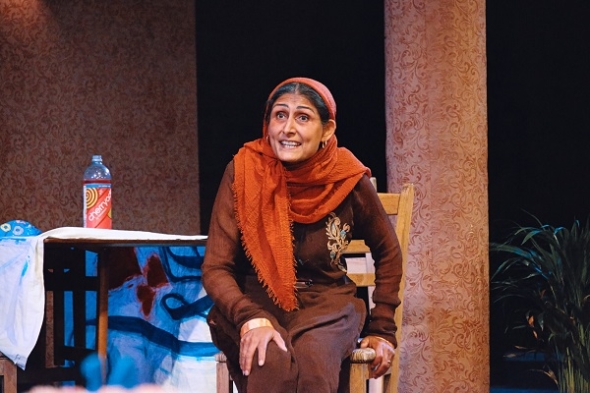 Three generations of Muslim women under one roof and secrets both traded and withheld, this is a play which is as profound as it is entertaining…

AS YOU ENTER the Holloway theatre auditorium of the Bush Theatre you are confronted by an open plan family home on stage with a ‘welcome home’ banner hanging above the door.

A young girl is painting a picture while sitting on the floor whilst an older woman is ironing. There is a kitchen on a basement level. This is the set for Ambreen Razia’s new play, ‘Favour’ an intriguing title.

Designed by Liz Whitbread, it is the family home of grandmother, Noor (Renu Brindle), her granddaughter, Leila an anxiety ridden teenager, delicately played by Ashna Rabheru, who is waiting for her mother, Aleena (Avita Jay) to come home.

She enters like a tornado all high kicks and hands and feet all over the place.

It is three generations of Muslim women in one family and this is their story.

Sometimes deeply poetic (where Noor describes her children to Leila saying – ‘this daughter will be your sun who will bring you great joy on some days and burn you on others’) and sometimes very London-centric, the writing has great depth and humanity.

Aleena has been in prison and is released on parole while her daughter, Leila is looked after by her mother, Noor.

From doing yoga, to smoking a surreptitious fag in the kitchen, all life is there.

Fozia (Rina Fatania) has a great time being the aunty or local gossip, who strolls in and out of the family home in her finery making the odd snide comment.

There are fine performances from the cast and a special mention for Brindle as Noor. She returns to the stage after spending time working as a dentist.

Aleena wants to take her daughter and move away, while Noor wants them to remain a family unit and have some structure. Leila is caught between the tussle.

Most of the action is set within the home and the arguments amongst the three generation of women are finely nuanced.

It’s great to see four Muslim female protagonists on stage and not a single stereotype in sight!

During the course of the interactions, the ‘favour’ becomes apparent as family secrets come to light and finally the women are able to achieve a kind of reconciliation that they all crave.

‘Favour‘ is co-directed by Róisín McBrinn and Sophie Dillon Moniram; the show is co-produced by Bush Theatre, and Clean Break — a theatre company, which is committed to transforming lives of women with criminal justice experience.

This is a moving drama with beauty and tenderness.

Razia is one of Britain’s most exciting emerging talents – an actor too, she broke through with her debut work, ‘The Diary of a Hounslow Girl’.

It toured and was later developed into a BBC3 pilot, while her second ‘Pot’ about girl gangs and children in care, also toured in 2018.

Running time 95 mins no interval until August 5
Show comes with Self-care guide and content guidance as it contains themes and discussion of the criminal justice system as well smoking and haze.

Privacy & Cookies: This site uses cookies. By continuing to use this website, you agree to their use.
To find out more, including how to control cookies, see here: Cookie Policy
← ACV Quiz 2019 – What kind of asian culture vulture are you? Test yourself…Now for the answers!
Year in Review: Our highlights of 2019 by Momtaz Begum-Hossain, Suman Bhuchar and Sailesh Ram →